Security officials to scale back fencing around US Capitol

WASHINGTON (AP) — Amid strong bipartisan pushback, security officials say they will soon scale back fencing that has circled the U.S. Capitol and cut off the entire area to pedestrian and vehicular traffic since a mob attacked the building on Jan. 6.

Timothy Blodgett, the acting House sergeant-at-arms, said Monday in a memo to members of Congress that the fencing will be scaled back in two phases in response to guidance from the U.S. Capitol Police that “there does not exist a known, credible threat” that warrants keeping the temporary barrier in place.

House Speaker Nancy Pelosi said in a letter to colleagues after Blodgett’s announcement that the Capitol Police “will continue to monitor the threat posture, and plans will be adjusted if and as needed.”

How to protect lawmakers, while keeping the Capitol grounds open to visitors, has emerged as one of the more daunting questions from the deadly insurrection. Lawmakers from both parties have decried the fencing as unsightly, expensive and beyond what is necessary, even though security fears remain high.

Members of Congress have described their unease at arriving for work each day in what can feel like a war zone, with checkpoints and National Guard troops lining the perimeter fence. The absence of tourists snapping photos of the Capitol dome or constituents meeting with representatives is an emotional loss on top of coronavirus restrictions, they said. The security perimeter extends far beyond the Capitol itself through neighboring parks and office buildings.

Lawmakers are also debating whether to launch a bipartisan commission to study the massive security failures that occurred Jan. 6 and how to respond to them long-term. Pelosi on Monday released a draft proposal for a commission that Republicans rejected last month, writing in a letter to colleagues that “we must get to the truth of how the January 6 assault happened, and we must ensure that it cannot happen again.”

Five people died after protesters stormed the building trying to stop Congress from certifying Democrat Joe Biden’s election over Republican Donald Trump. Trump was impeached by the House for inciting the mob, then acquitted by the Senate.

Blodgett said.the outer perimeter fencing will be removed in the latter part of March and Independence and Constitution avenues, the two major thoroughfares that flank the Capitol, will be opened for traffic.

An inner perimeter will be moved closer to the Capitol building this week, providing reopened access to nearby streets and some sidewalks. Strings of razor wire atop the fence will also be removed.

The political pressure to remove the security fencing has been building. The Senate Republican leader, Mitch McConnell of Kentucky, has compared it to a combat zone in Afghanistan, saying that “we are way overreacting.” The No. 2 Senate Democrat, Dick Durbin of Illinois, called it “ghastly.”

On Monday, Missouri Sen. Roy Blunt, the top Republican on the Senate Rules Committee, praised the decision to scale back the fencing. “I’d go further than that if it was up to me,” Blunt said. “I think our next problem is highly unlikely to be a carbon copy of the last problem.”

Blunt said the fencing is costing taxpayers $1.9 million a week, and National Guard troops protecting the Capitol have cost more than $500 million since Jan. 6.

The troops will remain in place, for now, but Blodgett said it is anticipated that the guard will “begin to reduce its posture at the Capitol in the coming weeks.”

Leaders say they are trying to find the right balance. Pelosi said Sunday that “you have to make sure you’re safe enough so those who are motivated by those misrepresentations do not think that they have open season at the United States Capitol.”

“I myself have been one to say, let’s see what we can do with a minimum of fencing, but again, this is a security decision,” Pelosi said.

In the Monday letter to colleagues, Pelosi reiterated that Congress will have to pass emergency security funding in the coming weeks. A sweeping security review commissioned by Pelosi in the aftermath of the riot and led by retired Army Lt. Gen. Russel Honoré recommended a series of steps that would require new dollars, including mobile fencing and “an integrated, retractable fencing system” that could be deployed as needed.

As Congress looks for a way forward, it is unclear if lawmakers will be able to agree on parameters for a bipartisan commission to study the security failures. Partisan tensions remain raw and have even worsened since Trump’s supporters laid siege to the building more than two months ago.

The idea of a commission has stalled since Pelosi last month proposed creating an 11-member body with four Republicans and seven Democrats, three of whom would be chosen by President Joe Biden.

McConnell and House Republican leader Kevin McCarthy said then that a legitimate commission would be comprised of an equal number of Republicans and Democrats, similar to the panel that studied the failures of the 9/11 attacks. They also objected to language that would allow the commission to study what factors led to the Capitol siege. 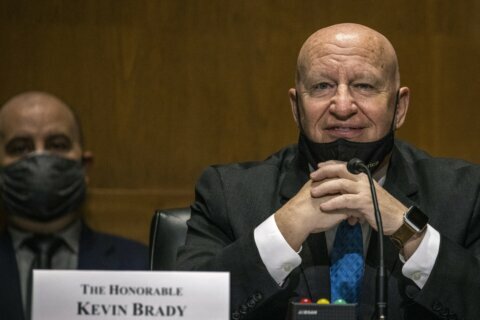