WASHINGTON (AP) — Republican leaders in the House and Senate say a proposed plan for an independent commission to study the Capitol insurrection is overly tilted toward Democrats, arguing that the panel should have an even party split like the one formed to study the Sept. 11 terrorist attacks.

House Republican leader Kevin McCarthy and Senate Republican leader Mitch McConnell said Wednesday that a legitimate commission would be comprised of an equal number of Republicans and Democrats. A draft proposed by House Speaker Nancy Pelosi would create an 11-member commission with four Republicans and seven Democrats, three of whom would be chosen by President Joe Biden, according to one of multiple aides who spoke on condition of anonymity to discuss the details under negotiation.

Pelosi has not commented on the draft or said why there should be more Democratic members. Last week, she said the commission must be “strongly bipartisan” and have the power to subpoena witnesses. But on Wednesday, House Democratic Conference Chair Hakeem Jeffries said McCarthy hasn’t operated in good faith and “set a bad tone” when he supported former President Donald Trump’s efforts to overturn Biden’s legitimate election victory.

The partisan bickering before the commission gets off the ground is raising questions about whether lawmakers can coalesce around a thorough review of the Jan. 6 riot that interrupted the presidential electoral count and led to five deaths. Both parties support creating an independent investigation, but much of the consensus ends there, with Democrats demanding accountability for lawmakers who amplified Trump’s falsehoods about the election.

The vast majority of Republicans stood by Trump as Democrats impeached him for telling his supporters to “fight like hell” to overturn his election defeat as Congress counted votes. And it is an open question whether the commission will be authorized to investigate Trump’s actions.

Republicans have suggested an evenly divided 10-member panel and have also objected to some of the rationale for forming the commission. A second aide said that Pelosi’s proposal would give broad latitude to the commission to investigate what led to the effort to disrupt the peaceful transfer of power and that it quotes FBI and intelligence assessments that show some of the violence was motivated by racism and false narratives about the election.

McConnell said on the Senate floor that the language is “artificial cherry picking” and that the commission should either look narrowly at the specific security failures in the Capitol or “potentially do something broader to analyze the full scope of political violence here in our country.”

He said an inquiry “with a hardwired partisan slant would never be legitimate in the eyes of the American people.”

McCarthy pointed to the Sept. 11 commission as the model. “It’s only Speaker Pelosi who’s trying to make this thing partisan,” he said.

That commission in 2004 made 41 recommendations to prevent another terrorist attack, covering tighter domestic security, the reform of intelligence gathering and new foreign policy directions. Several of them were later passed by Congress and signed by then-President George W. Bush.

The two chairs of that panel, former New Jersey Gov. Tom Kean and former Indiana Rep. Lee Hamilton, wrote a letter to congressional leaders and Biden after the Jan. 6 attack recommending they set up a similar commission to investigate and “establish a single narrative and set of facts to identify how the Capitol was left vulnerable, as well as corrective actions to make the institution safe again.”

In their letter, Hamilton, a Democrat, and Kean, a Republican, said that a “strong, resilient, and responsive Congress is essential for our system of government to work,” and that the commission was essential so that the American people learn the truth of what happened.

But politics have changed in the intervening 17 years, and Democrats and Republicans rarely agree on anything — including, in some cases, basic facts. Some of Trump’s most ardent supporters in Congress, and many of their constituents, still question whether Biden really won the election, even though Trump’s false allegations of widespread fraud have been rejected by election officials in both parties, his own attorney general and courts up to the U.S. Supreme Court.

Jeffries charged on Wednesday that McCarthy had given “aid and comfort” to the insurrectionists by voting for GOP challenges to the election the evening of Jan. 6, when Congress reconvened after the riot to finish counting the electoral votes and certify Biden’s win. The rioters had been calling for Congress to “stop the steal” and even called for the death of then-Vice President Mike Pence, who was presiding over the count and ultimately announced the results of his own defeat.

Democrats now control both chambers, and Senate Democratic leader Chuck Schumer has said he also supports a commission. Jeffries said, “This is the beginning of a dialogue that ultimately will turn into a legislative product.”

He added, “The guiding principle remains: This should be done in a bipartisan fashion. That is our intention. And that is I believe what will ultimately occur.” 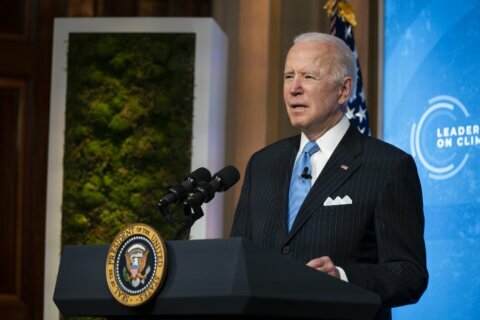