CORONAVIRUS NEWS: What to do, and not do, before and after your first shot | Prince George’s Co. enters new vaccination phase | Latest coronavirus test results
Home » Government News » US to move aircraft…

US to move aircraft carrier out of Mideast amid Iran tension

WASHINGTON (AP) — The Pentagon has decided to send home the only Navy aircraft carrier operating in the Middle East, a move that will reduce American firepower in the region amid heightened tensions with Iran.

The decision, announced Thursday by the acting secretary of defense, Christopher Miller, came one day after Air Force B-52 bombers flew nonstop from the United States to the Persian Gulf in a show of force that military officials said was intended to caution Iran against carrying out attacks against U.S. forces or interests.

Sending the aircraft carrier, the USS Nimitz, home to the U.S. West Coast would seem at odds with the idea that a show of force is needed to deter Iran. This might reflect a split within the defense establishment on whether Iran poses a heightened threat to strike in the waning days of the Trump administration.

In announcing the decision to send the Nimitz home, Miller made no mention of Iran.

Earlier this week, an American military officer close to the situation told reporters that the U.S. had detected signs that Iran had made preparations for possible attacks on U.S. or allied targets in Iraq or elsewhere in the Mideast. This was the reason for dispatching two B-52 bombers from the U.S. to briefly overfly the Gulf on Wednesday, said the officer, who spoke on condition of anonymity to discuss internal assessments.

President Donald Trump recently cited “chatter” that Iran might strike. Days after a Dec. 20 rocket attack on the U.S. Embassy compound in Baghdad by Iranian-supported Shiite militia groups, Trump tweeted that Iran was on notice.

“Some friendly health advice to Iran: If one American is killed, I will hold Iran responsible. Think it over,” Trump wrote on Dec. 23. He added, ”We hear chatter of additional attacks against Americans in Iraq.”

U.S. concerns have been tied to the approach of the Jan. 3 anniversary of the American airstrike that killed Iran’s top commander, Gen. Qassem Soleimani. Iran initially retaliated with a ballistic missile strike on a military base in neighboring Iraq that caused dozens of brain concussion injuries but no deaths among U.S. troops. But U.S. officials are concerned that Iran might be planning further retaliation.

Because of the potential for escalation that could lead to a wider war, the U.S. has sought to deter Iran from additional attacks. Strategic calculations on both sides are further complicated by the political transition in Washington to a Biden administration that may seek new paths to dealing with Iran. President-elect Joe Biden has said, for example, that he hopes to return the U.S. to a 2015 agreement with world powers in which Iran agreed to limit its nuclear activities in exchange for the lifting of international sanctions.

The U.S. has maintained a near-continuous aircraft carrier presence in the Persian Gulf region since the USS Abraham Lincoln was sent in May 2019 amid concerns that Iran was considering attacking U.S. interests in the region. The U.S. also sent additional land-based attack planes and reestablished a troop presence in Saudi Arabia.

The Nimitz deployed from the U.S. in April and was due to return before the end of the year. In early December, its planned return was postponed, in part out of concerns about potential Iranian threats, and more recently it was ordered to provide support off the coast of Somalia for the movement of American forces out of the country. 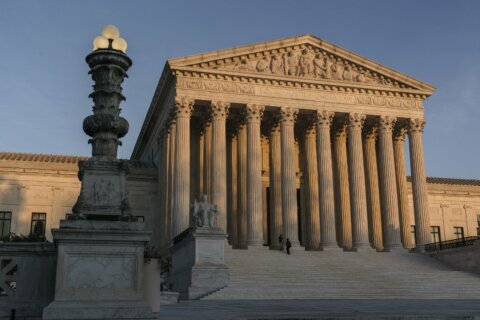