WASHINGTON (AP) — President Donald Trump has held himself up as a champion of U.S. troops without rival. Now, with his presidency on the line, he’s casting suspicion on a tool of participatory democracy — the mail-in ballot — that has allowed U.S. military personnel to vote while serving far from home since the War of 1812.

The president has shouted from Twitter to “STOP THE COUNT” and leveled unsubstantiated charges that “surprise ballot dumps” after election night are helping rival Democrat Joe Biden “steal” the election.

In his dizzying effort to sow doubt about the integrity of the vote, Trump has been all over the map on mail-in voting. The broadsides have unsettled many veterans and former military brass who saw voting by mail as a tether to their civic duty when serving abroad.

“Officials at all levels including in the Congress need to say to the president ‘Sir, you need to exercise the same patience that the rest of the nation does,’” said retired Navy Adm. Steve Abbot, who later served as deputy homeland security adviser in the George W. Bush administration.

Abbot is a member of Count Every Hero, a coalition of top military brass advocating for service members’ votes to be protected and properly tallied. He added: “It doesn’t help this democracy for (Trump) to continue to sound this alarm. It’s inappropriate.”

It’s unclear exactly how many mail-in military ballots remain uncounted in the undecided battleground states that will determine who will be the next president. More than 250,000 U.S. service members cast mail-in ballots in 2016 and even more were expected to vote by mail this time.

In the 2016 presidential election, Georgia received more than 5,600 ballots from uniformed service members; North Carolina received nearly 11,000; Pennsylvania nearly 7,800 and Nevada about 2,700, according to the U.S. Elections Assistance Commission.

In the razor-thin election in Georgia, the secretary of state’s office said as many as 8,900 ballots requested by military service members and U.S. citizens abroad — in addition to thousands that had already been received and tallied — could still arrive by Friday’s deadline.

Trump appeared to take notice of the number of outstanding military and overseas votes in Georgia, tweeting Friday: “Where are the missing military ballots in Georgia? What happened to them?”

Twenty-eight states and the District of Columbia accept and count ballots from overseas service members that arrive after Election Day as long as they are postmarked before polls close.

With Biden nearing the 270 electoral votes needed to capture the presidency, Trump has escalated his effort to sow doubt about mail-in votes that state officials are still counting.

“It’s amazing how those mail-in ballots are so one-sided, too,” Trump said in remarks at the White House on Thursday, hours after falsely stating in an all-caps tweet that any ballot received after Election Day won’t be counted. “I know that it’s supposed to be to the advantage of the Democrats, but in all cases, they’re so one-sided.”

Trump campaign spokeswoman Thea McDonald said the president believes “there are and should be exceptions for our military members serving our country overseas” to ensure their ballots are counted. But McDonald questioned why Pennsylvania election officials should be counting mail-in ballots for “Democrats in Philadelphia who attempt to vote after Election Day.”

Kristen Clark, a voting rights advocate, said the Trump campaign’s suggestion to stop tallying legally cast votes for one group (civilians) while continuing the counting of ballots for another (military personnel) made no sense.

“It’s an indefensible position to say state laws should apply to one set of voters but not to another,” said Clark, president of the Lawyers’ Committee for Civil Rights Under Law.

Trump throughout his presidency has cast himself as a champion of military families. He’s relished photo ops with Gold Star families, credited himself with reducing the number of U.S. troops deployed to “endless wars,” and poured new resources into the military.

But for some military families, Trump’s undercutting of late-arriving mail-in ballots reflects poorly on the commander in chief, even as his team has tried to clean up his broad attacks on mail-in voting.

“Everybody wants the right to participate in a democracy. That’s why people join the military. It’s something we believe in strongly,” said Tori Simenec, 28, of Minneapolis, a Marine 1st lieutenant who served from 2016 until August of 2020.

Mike Jason, 47, a retired U.S. Army colonel, recalled relying on mail-in balloting through a nearly three-decade career in which he voted by mail in his home state of Florida from outposts in Afghanistan, Iraq, Germany and a series of domestic installations.

After depending on mail-in ballots as his own personal lifeline to participation in American democracy until retiring from the Army last year, he found Trump’s attack on the integrity of mail-in voting to be infuriating. 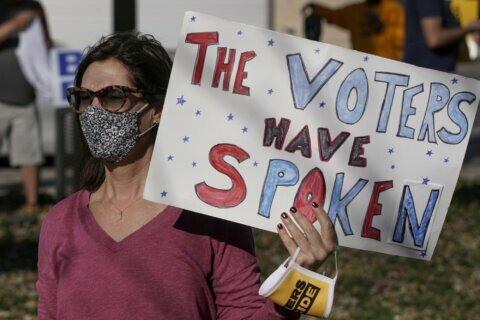