WASHINGTON (AP) — Congress is bracing for President-elect Joe Biden to move beyond the Trump administration’s state-by-state approach to the COVID-19 crisis and build out a national strategy to fight the pandemic and distribute the eventual vaccine.

The incoming administration’s approach reflects Democrats’ belief that a more comprehensive plan, some of it outlined in the House’s $2 trillion coronavirus aid bill, is needed to get the pandemic under control. Republicans have resisted big spending but agree additional funding is needed. With the nation on edge but a vaccine in sight, the complicated logistics of vaccinating hundreds of millions of Americans raise the stakes on the major undertaking.

“We have an incredible challenge on our hands,” said Sen. Patty Murray of Washington state, which is approaching the anniversary of its first reported case of the virus last January.

A vaccine can only go so far, Murray warned, without a distribution plan. “A vaccine can sit on a shelf. A vaccination is what we’re talking about,” she said.

As Congress weighs a new round of COVID-19 relief, federal officials say doses of the vaccine could begin shipping within a day of Food and Drug Administration approval. Three pharmaceutical manufacturers — Pfizer, Moderna and AstraZeneca — have announced early results. But the rollout faces a patchwork of state plans, a transitioning White House and potential backlash from vaccine skeptics, despite the rising U.S. death toll of nearly 260,000 people.

Biden said Tuesday on NBC’s “Nightly News with Lester Holt” that his team has started meeting with COVID-19 officials at the White House on how to “get from a vaccine being distributed to a person being able to get vaccinated.”

Democrats have been sounding the alarm that the Trump administration’s delay in granting Biden’s team access to transition materials was wasting precious time.

States submitted draft vaccination planning documents last month, but not all of them have made full plans public. Private Capitol Hill briefings by officials from Operation Warp Speed, the federal vaccine effort, left some lawmakers fuming last week over what they called a lack of coordination with Biden’s camp.

Azar said he wanted to ensure Biden’s transition would be “in the spirit of looking out for the health and well-being of the American people and, in particular, saving lives through this COVID-19 pandemic.”

From the start, the pandemic has challenged and reflected the two parties’ approaches to the public health crisis, with the Trump administration largely outsourcing many decisions to the states and Democrats pressing for a more nationalized approach.

In Congress, Republicans largely rejected the $2 trillion-plus House bill from Democrats as excessive. They prefer their own $500 billion Senate effort, saying states and cities can tap funding from previous relief legislation. Senate Democrats blocked that bill twice as insufficient.

Biden’s campaign called for $25 billion for vaccines to “guarantee it gets to every American, cost-free.” That’s similar to the amount included in both the House and the Senate bills, through different strategies, and Congress previously mandated that vaccines be free. With fresh legislation stalled, it’s uncertain if states will have the resources needed once the FDA approves the vaccines.

During a conference call this week with governors, Azar and other health officials fielded a range of questions. Governors were seeking guidance on which populations they should prioritize for the vaccine and whether there was a list of pharmacies available to administer the two-dose regimens, according to a readout of the call provided by the office of Democratic Gov. Jay Inslee of Washington.

Blaire Bryant, who oversees health care policy at the National Association of Counties, said a national strategy for communicating vaccine information to the public and the funding to make vaccinations equitable are vital.

“We’re in uncharted territory,” she said. “The more information, the more guidance we can get from the federal level, the better.”

She said states do have access to previously approved funding, but cash-strapped local governments have been reluctant to draw down the remaining dollars for vaccines. It’s robbing Peter to pay Paul, she said.

As Congress debates funding, at least two Republican senators are participating in vaccine trials as a way to build confidence among Americans skeptical of the federal effort.

Sen. Rob Portman, R-Ohio, said in a statement that he hoped his participation “will reassure people about the safety and effectiveness of vaccines.”

Sen. Steve Daines of Montana, who is participating in the Pfizer trials, asked the Centers for Disease Control and Prevention on Tuesday to consider the “unique challenges” of distributing the vaccine to remote and rural communities like those in his state.

Daines said in a letter to the CDC that it will also be “critical” to ensure access for frontline health care and essential workers, as well as older adults and people with medical conditions.

Other lawmakers, though, have brushed off concerns. GOP Sen. John Cornyn of Texas said he expects vaccine distribution will be “well underway” by the time Biden takes office Jan. 20.

Murray, as the top Democrat on the Senate Health, Education, Labor and Pensions Committee, grew concerned this summer as she said the Trump administration outsourced much of the vaccine distribution planning to the states.

She drafted a 19-page paper calling for $25 billion to stand up a vaccination program with supply chains, hired personnel, drive-in clinics and other ways to provide no-cost vaccines. She warned of the Trump administration’s “lack of centralized leadership” and “chaotic communication” with the states.

Biden and Murray have since talked about her approach, which draws on input from health professionals on Biden’s team. Former Surgeon General Vivek Murthy, a member of Biden’s COVID-19 task force, briefed Senate Democrats the week after the election.

Murray compared the vaccine effort to sending a man to the moon or fighting a world war. She said it will take all Americans joining to say, “This is a pandemic, and I’m going to do my part to get the country out of it.” 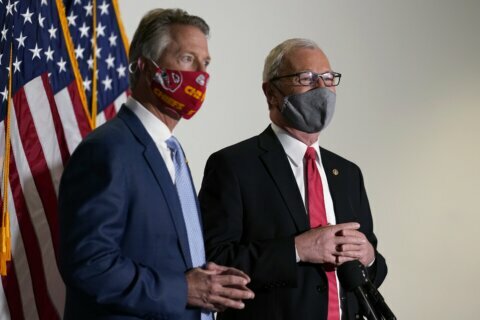