WASHINGTON (AP) — “The dogma lives loudly within you.”

It’s that utterance from California Sen. Dianne Feinstein, the top Democrat on the Senate Judiciary Committee, that’s on the minds of Democrats and Republicans preparing for this coming week’s hearings with Supreme Court nominee Amy Coney Barrett.

Feinstein’s 2017 remarks as she questioned Barrett — then a nominee for an appeals court — about the influence of Barrett’s Catholic faith on her judicial views sparked bipartisan backlash, contributing to the former law professor’s quick rise as a conservative judicial star.

Three years later, Barrett is back before senators as President Donald Trump’s nominee to replace the late Justice Ruth Bader Ginsburg. The nomination poses a politically risky test for lawmakers as they try to probe Barrett’s views on issues of abortion, health care access and gay marriage without running afoul of the Constitution’s prohibition against a religious test for public officials.

“Her religion is immaterial,” said Sen. Mazie Hirono, D-Hawaii, but it’s not out of bounds to question “the views themselves that she has articulated.”

At hearings that begin Monday, Sen. Chris Coons, D-Del., said he will focus on Barrett’s “public statements, on her judicial philosophy, on the ways in which her judicial views as publicly expressed leave me gravely concerned about how she might rule as a justice.”

Republicans are gleeful, predicting that Democrats will overreach and alienate key voters just weeks before the Nov. 3 election. Democrats are determined to avoid the trap, recognizing the political danger as their presidential nominee, Joe Biden, himself a lifelong Catholic, courts voters of faith.

“God forbid a Democratic senator did go after this candidate on the grounds of her religious belief,” said Stephen Schneck, a national co-chair of Catholics for Biden. “I think it would create a huge backlash that would certainly hurt the Biden campaign.”

It’s all the more daunting because Barrett’s faith has drawn much scrutiny thanks to her previous role as a “handmaiden” in People of Praise, a charismatic Christian community that views men as household leaders and, some ex-members say, women as subservient. She and her husband lived in a home owned by co-founders of the group when they were in law school, according to public records.

Senate Majority Leader Mitch McConnell, R-Ky., says any attacks on Barrett’s faith are a “disgrace.” Democrats, he said, are “so disconnected from their own country that they treat religious Americans like strange animals in a menagerie.”

Democratic leaders have pledged to focus their questioning elsewhere — particularly on the Affordable Care Act, which is being challenged before the court next month, and Barrett’s stance on the landmark Roe v. Wade abortion ruling.

“I don’t intend to question her about her personal views or private religious faith or views,” Coons, a key Biden ally, said this past week. “I don’t expect my colleagues will either.”

Feinstein spokesman Adam Russell said Feinstein “plans on focusing on the issues and what’s at stake for millions of American families if this process continues.”

The balancing act could prove difficult.

Fearful of losing the high court for a generation, the left is demanding that Democrats resist Barrett’s nomination with everything they have. But with the election so close, Democrats are wary of missteps that could hurt their bid to wrest back control of the White House and the Senate majority.

Republicans have preemptively declared any discussion of Barrett’s faith out of bounds.

A Republican on the committee, Sen. Josh Hawley of Missouri, asked Senate Minority Leader Chuck Schumer of New York to ensure Democrats don’t give oxygen to what Hawley said is a “a long history of anti-Catholic hatred by some in this country.”

Several Democrats on the committee said this past week that asking about religion would be inappropriate, yet avoiding faith completely could constrain their ability to sharply question Barrett on issues that she herself explored in rulings and legal writings. Biden’s running mate, California Sen. Kamala Harris, will be among the Democratic questioners walking the tightrope.

In 1998, Barrett co-wrote a law review article that said Catholic judges must “adhere to their church’s teaching on moral matters,” suggesting they might have to recuse themselves in certain death penalty cases. In 2015, she signed a letter with other Catholic women describing “the teachings of the Church as truth,” including “the value of human life” beginning at conception and marriage “founded on the indissoluble commitment of a man and a woman.”

Columbia University law professor Katherine Franke said that asking Barrett how she would handle “an irreconcilable conflict between the commitment she’s made to religious law and the commitment she’s made to secular law” would be acceptable. But specifics about Barrett’s faith, such as broaching People of Praise, would have “a bad odor,” Franke said.

At the 2017 hearing, Feinstein told Barrett that there was an “uncomfortable feeling” on the Democratic side and “that dogma and law are two different things.” In Barrett’s case, she said, “when you read your speeches, the conclusion one draws is that the dogma lives loudly within you.”

“And that’s a concern when you come to big issues,” Feinstein added.

Barrett’s declaration that it is “never” appropriate for judges to apply their personal convictions came in response to the committee’s then-chairman, Republican Sen. Chuck Grassley of Iowa, who said she had been “outspoken about your role and your Catholic faith.” He asked her about the propriety of a judge putting “their religious views above applying the law.”

Both Grassley and Sen. Ted Cruz, R-Texas, asked Barrett about the 1998 article on faith and the death penalty. Cruz said it was “obviously of relevance.”

Barrett said she had written the article two decades earlier, as a law student, and had no intention of withdrawing from death penalty cases because of her religion. She said it is “never appropriate for a judge to impose that judge’s personal convictions, whether they derive from faith or anywhere else on the law.”

John Gehring, Catholic program director at the liberal-leaning group Faith in Public Life, warned Democrats against making the sort of “unforced error” that Feinstein did.

To even attempt “to refute a charge of being anti-Catholic,” as Republicans have alleged, “is playing on their turf,” Gehring said. He urged Democrats to “stay laser-focused on the judicial issues and the real moral issues at stake.” 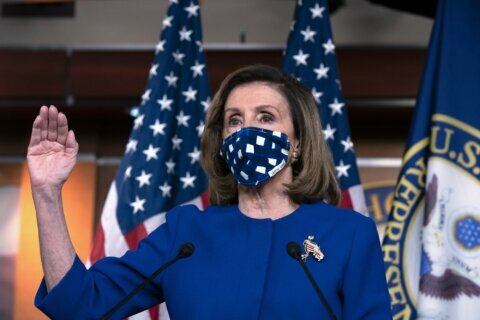 House already won? Pelosi thinks so, and reaches for more