CONCORD, N.H. (AP) — First lady Melania Trump used her first solo trip outside Washington since before the start of the coronavirus pandemic to showcase a piece of her “Be Best” youth well-being initiative on Thursday in a state her husband is hoping to win in November.

The first lady toured Concord Hospital in New Hampshire’s capital city with James Carroll, director of the Office of National Drug Control Policy, in an effort to highlight the hospital’s treatment programs for babies born with neonatal abstinence syndrome. Mrs. Trump, who has focused many of her public efforts on health issues such as the nation’s opioid crisis, tweeted earlier in the day that the appearance was a nod to Recovery Month.

The appearance came during the stretch run of the presidential election, in which President Donald Trump needs to pick up swing states like New Hampshire to win reelection. Trump lost the state to Democratic nominee Hillary Clinton by fewer than 3,000 votes in 2016. It was the second narrowest margin of victory in the election. Only Michigan was closer, and Trump won that state.

During Thursday’s appearance, Melania Trump said combating opioid abuse is one of the “three pillars of my Be Best initiative.” She also touted her husband’s administration’s release of $1.5 billion to states and tribes to address the crisis.

“Be Best encourages the creation of a safer, healthier and more hopeful world for our children,” Mrs. Trump said. “And thanks to my husband and this administration, we are doing exactly that.”

The first lady wore a face mask for the entirety of her appearance at the hospital. The tour included a roundtable discussion with Carroll and hospital officials, and a tour of the hospital’s Simulation Center, which included activities designed to help provide comfort to babies born after being exposed to drugs in the womb.

Carroll said the administration’s goal is to “reduce the supply of drugs on the street, to try to give these people a chance to put their hand up and say ‘I’m here.’”

The opioid crisis has hit New Hampshire hard. The state had nearly 36 drug overdose deaths per 100,000 residents in 2018. That was one of the six highest rates in the country.

The first lady also made a stop at the Manchester Fire Department Central Station, where she and the president visited in 2018. 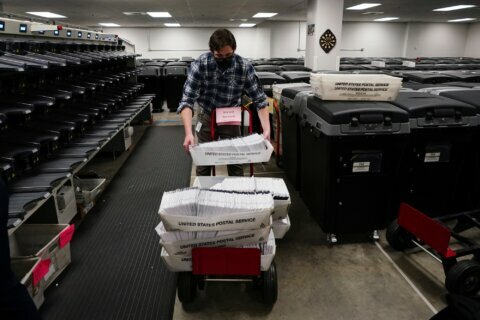