NEW YORK (AP) — On the campaign trail with President Donald Trump, the pandemic is largely over, the economy is roaring back, and murderous mobs are infiltrating America’s suburbs.

With Democrat Joe Biden, the pandemic is raging, the economy isn’t lifting the working class, and systemic racism threatens Black lives across America.

The first week of the fall sprint to Election Day crystallized dizzyingly different versions of reality as the Republican incumbent and his Democratic challenger trekked from Washington and Delaware to Wisconsin and Pennsylvania and back, each man on an urgent mission to sell his particular message to anxious voters.

All the conflicting messages carry at least a sliver of truth, some much more than others, as the candidates fight to navigate one of the most turbulent election seasons in modern history. And beyond legitimate crises threatening public health, the economy and public safety, a new divide erupted Friday over the military.

Trump aggressively denied allegations reported late Thursday that in 2018, he described U.S. service members killed in World War I and buried at an American military cemetery in France as “losers” and “suckers.” The report, sourced anonymously by The Atlantic and largely confirmed by The Associated Press, comes as Trump tries to win support from military members and their families by highlighting a commitment to veterans’ health care and military spending.

“I’ve done more for the military than almost anyone else,” Trump said Friday from the Oval Office, after describing the allegations on social media as “a disgraceful attempt to influence the 2020 Election.”

At roughly the same time at a podium in Delaware, Biden leaned into the damaging reports about his opponent.

“Let me be clear: My son Beau, who volunteered to go to Iraq, was not a sucker,” Biden declared, pounding the podium. “The men and women who served with him are not suckers, and the service men and women he served with, who did not come home, are not losers.”

The back-and-forth was a final flash point in a week that demonstrated much broader challenges for the candidates and voters alike in 2020.

Trump and his allies consistently downplayed the threat posed by the coronavirus. Yet there are still several hundred Americans dying from the disease each day. And the government’s top infectious disease expert, Anthony Fauci, warned that this Labor Day weekend could fuel a further surge in cases if people don’t take social distancing seriously.

The outbreak is blamed for about 187,000 deaths and almost 6.2 million confirmed infections in the U.S., by far the highest totals in the world. Cases of COVID-19, which spiked from about 20,000 per day to around 70,000 during the summertime surge in the South, are now down to about 40,000 every day.

Biden on Friday linked the pandemic and Trump’s push to revive the economy: “You can’t have an economic comeback when almost a thousand Americans die a day from COVID.”

“We are now moving from historical disaster territory to really bad recession territory,” he said.

Trump cannot afford to let Americans believe the economy is in “really bad recession territory,” however, given that his economic leadership is a central theme in his reelection message. Needing to spin the data to their advantage, Trump and his allies seized on Friday’s news as evidence that things were headed in the right direction.

“It’s another great day for American jobs and American workers,” Vice President Mike Pence said on CNBC. “This president’s advanced policies … have laid a foundation for this great American comeback. Joe Biden and the Democrats are advocating policies that would turn us back.”

And while the impact of the Democrats’ policies cannot be known, Biden drew on the data to paint an accurate, yet distinctly different portrait of the U.S. economy in line with the message he has delivered for much of the last year, even before the pandemic began to wreak havoc.

“We’re still down 720,000 manufacturing jobs,” Biden said. “In fact, Trump may well be the only president in modern history to leave office with fewer jobs than when he took office.”

“Talk to a lot of real working people who are being left behind,” he added. “Ask them, do you feel the economy is coming back? They don’t feel it.”

One key factor as the candidates deliver conflicting messages to voters: trustworthiness. And so far, voters say they are far more likely to believe Biden than Trump on most issues.

About 6 in 10 registered voters say values like “cares about people like you,” “honest” and “strong leader” do not describe Trump well, according to a poll released by The Associated Press and the NORC Center for Public Affairs Research in late July. By comparison, roughly the same majority say those characteristics describe Biden at least somewhat well.

And on race relations, another defining crisis of the fall campaign, strong majorities of voters consistently disapprove of Trump’s leadership.

But sensing political opportunity as protest-related violence surged earlier in the week, Trump further pressed his divisive approach as he campaigned in Kenosha, Wisconsin, the latest epicenter of the nation’s sweeping civil unrest.

Less than two weeks after a white police officer shot Jacob Blake, a Black man, in the back seven times, Trump reaffirmed his support for the police and businesses affected by the sometimes violent protests that followed.

Trump did not meet with Blake’s family while in Wisconsin, as Biden did Thursday when he visited the area for the first time. Instead, the president focused on the threat posed by protesters, telling reporters he does not believe systemic racism is a problem in America’s law enforcement agencies.

Two days later, Biden condemned the violent protests during his own visit to Kenosha, but first he met privately with Blake’s family and later criticized what he described as centuries of systemic racism.

“He doesn’t want to talk about anything, anything at all about the job he hasn’t done,” Biden said Friday of Trump, suggesting the president is far more eager to exaggerate the threat posed by those protesting police brutality.

“And so it’s a conundrum,” Biden said. “And in a sense, every time I speak about it I feel like I’m playing in his game.” 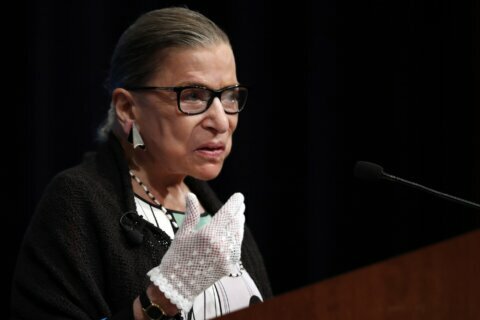 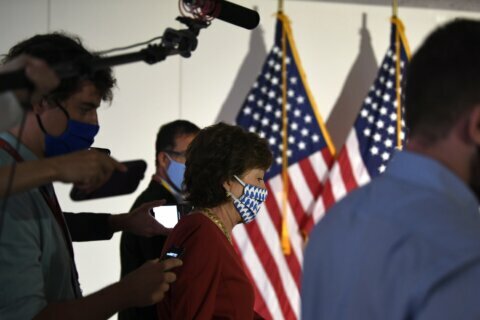