WASHINGTON (AP) — Secretary of State Mike Pompeo pledged on Wednesday that the Trump administration will continue to support Iraq as it confronts the threat posed by the Islamic State group, but he also called for the Baghdad government to redouble efforts to rein in pro-Iran militias.

Pompeo said the United States was committed to helping Iraq regain and maintain security, despite President Donald Trump’s oft-stated desire to reduce and then eliminate the American troop presence there. Pompeo spoke after talks with senior Iraqi officials and a day before a White House meeting between Trump and Iraq’s prime minister, Mustafa al-Kadhimi,

“There is still work to do,” Pompeo told reporters at a State Department news conference with Iraq’s foreign minister Fuad Hussein. “Armed groups not under the full control of the prime minister have impeded our progress. Those groups need to be replaced by local police as soon as possible. I assured Dr. Fuad that we could help and we would help.”

Pompeo declined to discuss possible future American troop withdrawals. But he said the U.S. will not stop supporting Iraq’s security forces in their bid to defeat the Islamic State group, which is also known as ISIS, and “to curb the power of militias that have for far long terrorized the Iraqi people and undermined Iraq’s national sovereignty.”

The foreign minister called the talks “good and important” and said the Iraqi government believes in the importance of its partnership with the United States.

Both men expressed hope that as the security situation improves, there will be greater economic cooperation between the two countries, particularly in the energy sector. Pompeo said he expected several U.S.-Iraqi energy agreements to be concluded in the near future.

“We want an Iraq that is corruption free, prosperous and fully integrated into the global economy,” Pompeo said.

Before leaving for Washington, al-Kadhimi told The Associated Press that his country still needs U.S. assistance to counter IS and that his government is committed to introducing security sector changes as militia groups stage near-daily attacks in Baghdad.

He said Iraq currently does not need direct military support on the ground, and that the levels of help will depend on the changing nature of the threat. Al-Kadhimi, who is backed by the United States, assumed office in May when Baghdad’s relations with Washington were precarious following the U.S. killing of Iranian Gen. Qassem Soleimani in a drone strike at the Baghdad airport.

Al-Kadhimi has often had to walk a tightrope amid the U.S.-Iran rivalry. Asked if he was bringing any messages to Washington from Tehran following a recent visit there, he said: “We do not play the role of postman in Iraq.”

Three years since Iraq declared victory over IS, sleeper cells continue to stage attacks across the country’s north. Meanwhile, the U.S.-led coalition has been carrying out a planned drawdown this year as Iraqi security forces take the lead in combat and air raids.

Al-Kadhimi’s administration has inherited myriad crises. State coffers in the crude oil-dependent country were slashed following a severe drop in prices, adding to the woes of an economy already struggling with the aftershocks of the global coronavirus pandemic.

State violence used to quell the mass protests that erupted in October brought public trust in the government to a new low. Tens of thousands of Iraqis marched decrying rampant government corruption, poor services and unemployment, leading to the resignation of the previous premier, Adel Abdul-Mahdi. 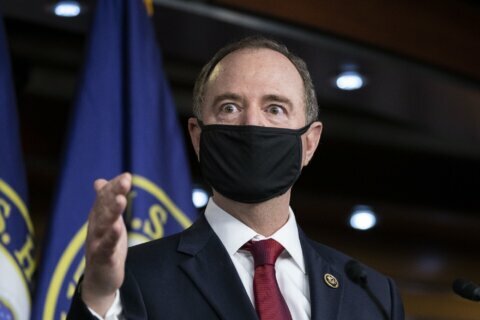