Omar, seeking 2nd term, is targeted for her celebrity

MINNEAPOLIS (AP) — As Democrat Antone Melton-Meaux meandered through racks of headscarves and clouds of spice and pepper, he carried a pointed message to the voters he courted at the city’s largest Somali market: I want to focus on the work, not being famous.

There’s no missing the target of the dig: Rep. Ilhan Omar. Omar, a liberal Democrat, made history two years ago as the first Somali-American elected to Congress and went on to make countless headlines for making controversial statements on Israel, for tangling with President Donald Trump and for a personal life that became tabloid fodder.

All the attention has helped make Omar a progressive star, but it’s also drawn criticism and a surprisingly strong primary challenger in Melton-Meaux. The Black attorney and mediator is raising millions in anti-Omar dollars and shaking up what was expected to be an easy race.

The heated primary is playing out in a city already wrestling with racial divisions and political identity. Melton-Meaux has drawn support from some traditional Democrats uncomfortable with Omar’s style — highlighting a generation gap that has dogged Democrats this year. He’s raised big money from pro-Israel groups with strong support in the city’s first-ring suburbs. And his bid has prompted a fight for votes in the Black and Somali-American communities, each roiled by this summer’s uprising over George Floyd’s death.

“She has been ineffective in Washington because she is divisive, and she’s focused on her celebrity,” Melton-Meaux said.

Omar dismisses the criticism, along with Melton-Meaux, who she said is simply the beneficiary of deep-pocketed opponents who want to take her down.

“This campaign really isn’t about whether Ilhan is doing the work,” she said. “It’s about how effective we’ve actually been and how people don’t want that effectiveness to continue.”

Omar, 37, ordinarily would be expected to crush any opponent in the Aug. 11 primary in the heavily Democratic Minneapolis-area district. The former refugee from Somalia gained fame as one of the first two Muslim women elected to Congress and as a charter member of “The Squad” of four progressive freshmen women of color.

But she quickly got into trouble with comments about Jews, money and Israel that even fellow Democrats denounced as anti-Semitic and led to apologies. Omar also became a favorite Twitter foil for Trump, who last year basked when supporters at a political rally chanted of Omar, “Send her back!”

She came under renewed scrutiny when she split up with her husband, then married her Washington political consultant, Tim Mynett, months after denying that they were having an affair. Conservatives raised ethical questions and filed a federal complaint over Omar’s campaign paying Mynett’s firm more than $1 million for advertising, fundraising and other services, but the law doesn’t prohibit such an arrangement.

Melton-Meaux’s fundraising haul has bankrolled a $1.4 million TV ad buy and an extensive mail campaign that attacks Omar on ethics. He’s also pledged to focus on the district’s needs and on not missing votes, as Omar did 40 times last year. (She says many were due to the death of a family member and that most were procedural.) He said that when she does vote, it isn’t always in the district’s interests, citing her vote against the U.S.-Mexico-Canada trade deal.

Melton-Meaux seemed to find some support for his message during a July visit to what should be prime Omar turf — a mall filled with shops catering to the city’s large Somali American community.

Khadra Hassan told Melton-Meaux that her tiny clothing store in the Karmel Mall has been devastated by the coronavirus pandemic, and complained that the government doesn’t have a plan for helping small businesses like hers survive.

“The situation is the same all around you, with all of us,” she told him. A campaign aide promised to get back with Hassan on how she could seek help. Later, Hassan told a reporter that Melton-Meaux might get her support.

“We are looking for the person who’s going to most help us and come back to the community and focus on the things that we need on the ground,” she said through an interpreter. “And then we will make our decision. But right now we need an active person who’s willing to work for what’s happening right here in the district.”

Melton-Meaux raised over $3.7 million by June 30, most of it from big contributors, including over $530,000 from two political action committees that back Israel, NORPAC and Pro-Israel America.

Jeff Mendelsohn, executive director of Pro-Israel America, recalled Omar’s allegation that U.S. politicians supported Israel because it was “all about the Benjamins,” and her suggestion that American Jews have divided loyalties.

The local Jewish community appears split, with many younger politically progressive Jews supporting Omar while others have endorsed Melton-Meaux.

State Sen. Ron Latz, a Democrat who is Jewish and has sometimes been critical of Omar, backs Melton-Meaux in part for what he sees as a more balanced perspective on Middle East issues than the pro-Palestinian Omar.

“She seems to have found a way to restrain herself for some number of months now,” he said. “But I think that restraint has been externally imposed. We clearly know her personal inclinations because she kept saying things that were offensive to the Jewish people until the reaction got so hot that she felt she had to quiet herself down.”

“She hasn’t built strong relationships with the people who live in north Minneapolis, and she hasn’t spent the time here to learn about the issues that impact us, or working to craft solutions to the challenges that we face,” she said.

Omar raised nearly $3.9 million through June 30, mostly from far more small donors than Melton-Meaux, and still enjoys the support of most Democratic heavyweights. Omar pointed out the party considers her district “the engine of voter turnout for our state” and is counting on her network in November to quash Trump’s dream of carrying Minnesota.

Charlie Rounds, 64, an LGBTQ advocate in Minneapolis, said he hadn’t decided between Omar and Melton-Meaux. But he said the argument that Omar cares more about fame than service doesn’t wash with him. He saw the outside money against her as Islamophobia.

“I don’t think that was Rep. Omar’s choice, I don’t think she set out to be a star,” he said. “It’s because she’s a Muslim woman and there’s a lot of people that just are going to do anything to defeat her because she’s Muslim — we have to look at that reality.”

“She does care about the real issues that’s going on, she always speaks her mind and she’s always available,” he said. “She was at the protests talking about police brutality, that’s something that shows she is relating to the people and she cares about the cause and connected to the people.”

The Latest: No Democrats expected to vote to confirm Barrett 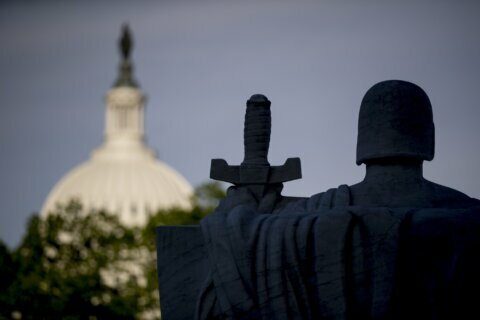