At least that’s the concern of a pro-Democrat super PAC embracing a new strategy backed by $15 million in online ads to help close the nagging enthusiasm gap between the Republican president and his Democratic challenger. The strategist leading the super PAC known as PACRONYM warns that Biden is leading many polls “by default” and may lose his advantage unless Democrats give key groups of voters better reasons to get excited about their nominee.

“We really think that Biden’s enthusiasm gap could be a vulnerability,” said PACRONYM founder and CEO Tara McGowan.

Beginning in August, the group and its sister nonprofit will begin pumping millions of dollars into online ads targeting a group of roughly 1.7 million “low-information” left-leaning voters — largely women of color under 35 — spread across Michigan, Pennsylvania, Wisconsin, North Carolina, Arizona and Georgia who don’t know much about Biden and probably wouldn’t turn out to vote without a push. The strategy represents a significant shift away from a broader group of “persuadable” voters in swing states who have been the overwhelming focus of more traditional political groups.

Recent polls suggest that much of Biden’s support comes from a coalition of voters united far more by their disdain for Trump than their affinity for Biden. There is also agreement between the campaigns that many voters don’t know Biden or his plans very well, despite his lifetime in Washington.

Biden’s team has largely dismissed the issue, pointing to the intensity with which many voters oppose Trump. But sensing opportunity, Trump’s campaign has been flooding swing states with anti-Biden attack ads trying to can scare away would-be Biden supporters or at least persuade them not to vote at all.

Democratic strategist David Plouffe, who served as campaign manager for President Barack Obama, said it was difficult even for Obama to persuade some lower-information voters of color to show up for the nation’s first Black president. It will be harder for Biden, Plouffe suggested, even though Biden served as Obama’s vice president for eight years.

“These voters are hard to reach, hard to turn out,” Plouffe added. “And with (Obama), there was a little more excitement.”

The super PAC’s effort will target low-information voters on platforms like Instagram, Snapchat, Hulu and even gaming devices. While the specific ads have not yet been created, they’re likely to acknowledge the voters’ skepticism about Biden and use celebrities, actors or musicians to highlight his plans to address issues like climate change and college debt, McGowan said.

“A lot of these voters, if they voted in the primary, Joe Biden likely wasn’t their first or second or even third choice,” she said.

“A lot of voters don’t know he would be the most progressive president in history based on his positions,” McGowan continued. “They don’t know much about Joe Biden aside from him being Obama’s vice president. That’s not enough for them.”

While PACRONYM’s investment is significant, it’s not the only political group working to energize voters of color. Another super PAC, Priorities USA, recently announced a $24 million digital advertising campaign along with Color of Change aimed at energizing Black men and women across some of the same swing states.

Priorities chair Guy Cecil said last week that his group projects Biden would lose his advantage over Trump if his support from white working-class voters dropped by 5 percentage points and turnout among voters of color dropped by just 2 points.

“While the numbers certainly have been encouraging for Democrats, we are not done,” Cecil said.

Meanwhile, the Biden campaign, which isn’t legally allowed to coordinate with super PACs, announced plans on Tuesday to spend $15 million in the next week alone on a TV, radio, online and print advertising blitz across at least six battleground states.

While Trump has focused on attacking Biden, the new Biden ads highlight what the campaign calls “Biden’s trusted and tested experience during times of crises” and make the “positive case for Joe Biden’s leadership and his vision for his presidency.” 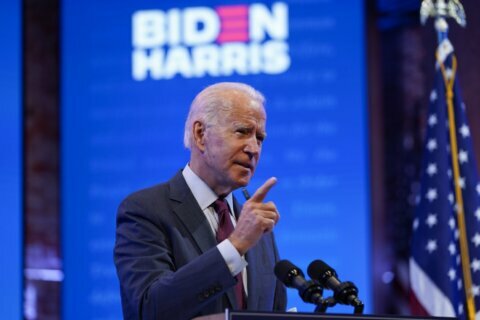