Trump’s plan envisions a disjointed Palestinian state that turns over key parts of the West Bank to Israel. It sides with Israel on key contentious issues that have bedeviled past peace efforts, including borders and the status of Jerusalem and Jewish settlements, and attaches nearly impossible conditions for granting the Palestinians their hoped-for state.

Palestinian President Mahmoud Abbas dismissed the plan as “nonsense” and vowed to resist it. Netanyahu called it a “historic breakthrough” equal in significance to the country’s declaration of independence in 1948.

He vowed to immediately press forward with his plans to annex the strategic Jordan Valley and all the Israeli settlements in occupied lands. Netanyahu said he’d ask his Cabinet to approve the annexation plans in their next meeting on Sunday, an explosive move that could trigger harsh international reaction and renewed violence with the Palestinians.

“This dictates once and for all the eastern border of Israel,” Netanyahu told Israeli reporters later. “Israel is getting an immediate American recognition of Israeli sovereignty on all the settlements, without exceptions.”

Given the Palestinian opposition, the plan seems unlikely to lead to any significant breakthrough. But it could give a powerful boost to both Trump and Netanyahu who are both facing legal problems ahead of tough elections.

Trump called his plan a “win-win” for both Israel and the Palestinians, and urged the Palestinians not to miss their opportunity for independence. But Abbas, who accuses the U.S. of unfair bias toward Israel, rejected it out of hand.

“We say 1,000 no’s to the Deal of the Century,” Abbas said, using a nickname for Trump’s proposal.

“We will not kneel and we will not surrender,” he said, adding that the Palestinians would resist the plan through “peaceful, popular means.”

The plan comes amid Trump’s impeachment trial and on a U.S. election year, and after Netanyahu was indicted on counts of fraud, breach of trust and bribery in three separate cases. The longtime Israeli leader, who denies any wrongdoing, also faces a March 2 parliamentary election, Israel’s third in less than a year. He hopes to use the plan, and his close ties with Trump, to divert attention from his legal troubles.

The Palestinians seek all of the West Bank and east Jerusalem — areas captured by Israel in the 1967 Mideast war — for an independent state and the removal of many of the more than 700,000 Israeli settlers from these areas.

But as details emerged, it became clear that the plan sides heavily with Netanyahu’s hard-line nationalist vision for the region and shunts aside many of the Palestinians’ core demands.

Under the terms of the “peace vision” that Trump’s son-in-law and senior adviser Jared Kushner has been working on for nearly three years, all settlers would remain in place, and Israel would retain sovereignty over all of its settlements as well as the strategic Jordan Valley.

“The Israeli military will continue to control the entire territory,” Netanyahu said. “No one will be uprooted from their home.”

The proposed Palestinian state would also include more than a dozen Israeli “enclaves” with the entity’s borders monitored by Israel. It would be demilitarized and give Israel overall security control. In addition, the areas of east Jerusalem offered to the Palestinians consist of poor, crowded neighborhoods located behind a hulking concrete separation barrier.

Trump acknowledged that he has done a lot for Israel, but he said he wanted the deal to be a “great deal for the Palestinians.”

The plan would give the Palestinians limited control over an estimated 70% of the West Bank, nearly double the amount where they currently have limited self-rule. Trump said it would give them time needed to meet the challenges of statehood.

The only concession the plan appears to demand of Israel is a four-year freeze on the establishment of new Israeli settlements in certain areas of the West Bank. But Netanyahu clarified later that this only applied to areas where there are no settlements and Israel has no immediate plans to annex, and that he considered the plan to impose no limitations on construction.

Thousands of Palestinians protested in Gaza City ahead of the announcement, burning pictures of Trump and Netanyahu and raising a banner reading “Palestine is not for sale.”

Trump said he sent a letter to Abbas to tell him that the territory that the plan has set aside for a new Palestinian state will remain open and undeveloped for four years.

“It’s going to work,” Trump said, as he presented the plan at a White House ceremony filled with Israeli officials and allies, including evangelical Christian leaders and wealthy Republican donors. Representatives from the Arab countries of Bahrain, Oman and the United Arab Emirates were present, but there were no Palestinian representatives.

“President Abbas, I want you to know, that if you chose the path to peace, America and many other countries … we will be there to help you in so many different ways,” he said. “And we will be there every step of the way.”

The 50-page plan builds on a 30-page economic plan for the West Bank and Gaza that was unveiled last June and which the Palestinians have also rejected.

It envisions a future Palestinian state consisting of the West Bank and Gaza, connected by a combination of roads and tunnels. It also would give small areas of southern Israel to the Palestinians as compensation for lost West Bank land.

But the many caveats, and ultimate overall Israeli control, made the deal a nonstarter for the Palestinians.

Netanyahu and his main political challenger in March elections, Benny Gantz, had signed off on the plan.

“Mr. President, because of this historic recognition and because I believe your peace plan strikes the right balance where other plans have failed,” Netanyahu said. “I’ve agreed to negotiate peace with the Palestinians on the basis of your peace plan.

The Jordan Valley annexation is a big part of Netanyahu’s strategy and a key promise meant to appeal to his hard-line nationalist base, which mostly applauded the Trump plan.

U.S. officials, speaking on condition of anonymity ahead of the plan’s release, said they expected negative responses from the Palestinians, but were hopeful that Jordan and Egypt, the only two Arab nations to have peace treaties with Israel, would not reject it outright.

Jordan gave the plan a cool reaction, saying it remained committed to a two-state solution based on Israel’s pre-1967 lines. It also said it rejected any unilateral move by Israel, referring to the annexation plan.

The reaction of Jordan, which would retain its responsibilities over Jerusalem’s al-Aqsa Mosque under the plan, is particularly significant. Located next to the West Bank, Jordan also is home to a large Palestinian population.

Egypt, the first Arab country to reach a peace deal with Israel, urged Israelis and Palestinians to carefully study the plan. The European Union also said it needed to study it more closely.

Saudi Arabia, another key Arab country, said it appreciated the Trump administration’s efforts and encouraged the resumption of direct talks between Israel and the Palestinians “under the auspices of the United States.”

U.N. Secretary-General Antonio Guterres said the United Nations supports two states living in peace and security within recognized borders, on the basis of the pre-1967 borders, according to his spokesman.

The Palestinians see the West Bank as the heartland of a future independent state and east Jerusalem as their capital. Most of the international community supports their position, but Trump has reversed decades of U.S. foreign policy by siding more blatantly with Israel. The centerpiece of his strategy was recognizing Jerusalem as Israel’s capital and moving the American Embassy there. He’s also closed Palestinian diplomatic offices in Washington and cut funding to Palestinian aid programs.

Those policies have proven popular among Trump’s evangelical and pro-Israel supporters.

But the Palestinians refuse to even speak to Trump and they called on support from Arab leaders. 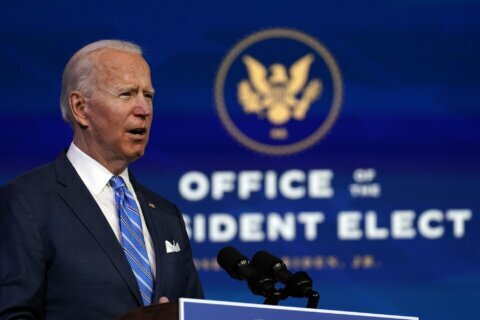