SYLVANIA, Ohio (AP) — Chinese rookie Ruoning Yin turned her irritation over a bogey into six birdies over his last 10 holes Thursday for a 6-under 65 and a three-way tie for the lead in the Dana Open.

Hye-Jin Choi, who like Yin earned her LPGA Tour card last year for the first time, and Carlota Ciganda of Spain also had 65 at Highland Meadow.

The 19-year-old Yin has been coping with a wrist injury and missed four straight cuts on the LPGA Tour. Her last appearance was in mid-July, though she played two Epson Tour events.

Her one goal was to play bogey-free, and that ended on the par-3 eighth hole.

“I was so mad after that,” she said. “I just tried to make some birdies.”

Choi did most of her work early in the round and was poised to take the lead until the South Korean had to settle for pars on the back-to-back par 5s at Highland Meadow. Ciganda played in the morning and finished her round with a two-putt birdie on the 18th.

Maguire returned to an area that brought good memories. She played some of her best golf at Inverness last summer in leading Europe to victory in the Solheim. Her return to the Toledo area included a new set of irons.

“It’s not like me to change,” said Maguire, who switched the Ping 230s. “I’ve been home for a couple weeks, did some testing while I was home. … They felt good in practice, so figured it was as good a time as any to give them a test go.”

Ko is a two-time winner who has reason to feel she should have three. She had the tournament won two years ago when she gave away a late lead and then chunked a chip that rolled back into the bunker on the 18th, leading to bogey and a runner-up finish.

Still, the Kiwi star has nothing but positive vibes at Highland Meadows.

“It’s always nice to come back to a place that you’ve played well at. I’ve had good finishes outside of winning, so it’s nice to kind of draw back on those memories,” she said.

“But at the same time, my game has changed a lot I think over the last few years, so I feel like I’m playing some holes a lot differently,” Ko said. “So just trying to play the best golf I can with how I’m playing right now. ”

U.S. Women’s Open champion Minjee Lee, who leads the Race to the CME Globe, was in the group at 67. Defending champion Nasa Hataoka opened with a 69.

Paula Creamer played her first LPGA Tour event as a mom. In her first competition in more than a year, Creamer opened with a birdie. That was the lone highlight as she posted a 40 on the back nine on her way to a 77.

Another new mom, Azahara Munoz of Spain, opened with a 72. Munoz also has been coping with an autoimmune thyroid issue that she believes is now under control.

Among the three dozen players who shot in the 60s was Lucy Li, who opened with a 68. Li, best known for playing the U.S. Women’s Open when she was 11, already has an LPGA card locked up for next year through the Epson Tour.

Gianna Clemente had a 73. The 14-year-old Ohio native was a Monday qualifier in Canada last week, and she made it through Monday qualifying against for the Dana Open. 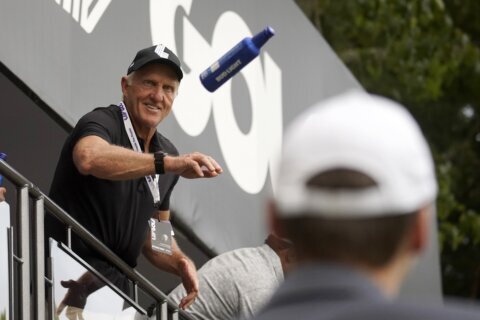 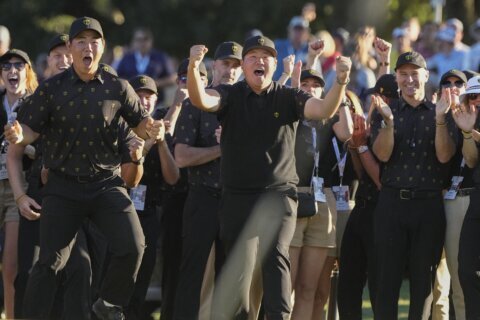