Patrick Cantlay won another thriller Sunday in the BMW Championship, getting a great bounce on the 17th hole that set up a short birdie and led to a 2-under 69 and a one-shot victory over Scott Stallings.
Listen now to WTOP News WTOP.com | Alexa | Google Home | WTOP App | 103.5 FM

WILMINGTON, Del. (AP) — One good break. One great shot. That’s what it took Sunday for Patrick Cantlay to win the BMW Championship for the second straight time with a finish that was nothing like last year except for his clutch moments.

One other difference: The victory didn’t give him the No. 1 seed going into the FedEx Cup finale next week at East Lake in Atlanta.

That was of little concern to Cantlay after his birdie-par finish for a 2-under 69, giving him a one-shot victory over Scott Stallings at Wilmington Country Club.

“I was glad not to go six holes in a playoff,” Cantlay said, referring to his unlikely playoff win last year at Caves Valley over Bryson DeChambeau.

This looked to be headed that way when Cantlay and Stallings were tied down the stretch, with Masters champion Scottie Scheffler and Xander Schauffele lurking.

Tied with two holes to play, Cantlay took an aggressive line to cut off the corner of a dogleg and figured he was headed for a cluster of bunkers. But the ball landed short of the last bunker, took a big hop over the sand, and tumbled into the first cut and rolled out to the fairway, just 64 yards from the hole.

“I thought hitting it on that line, it would for sure be in a bunker,” he said. “Got an excellent break — maybe one of the best breaks I’ve gotten coming down the stretch — and when you get a break like that you need to pay it off.”

That he did, hitting a spinner with a wedge that skipped and stopped 5 feet behind the hole for birdie and a one-shot lead. Stallings in the group ahead narrowly missed a birdie putt from just inside 10 feet on the last hole for a 69.

Cantlay needed par to win and fanned his drive into a bunker, the ball above his feet, 158 yards to pin on a steeply pitched green.

“I tried to slice an 8-iron about as hard as I could and went to about where I thought I could get it, and it was one of the best shots I hit all week,” he said.

His putt caught the lip of the cup, leaving him a tap-in, about the easiest shot he had all day.

Cantlay, who finished at 14-under 270, became the first player to win the BMW Championship in consecutive years since the FedEx Cup began in 2007. No one has ever repeated in any of the playoff events. The victory, his second of the year, moved him to No. 3 in the world.

He played all four rounds with Schauffele, and only later did he realize he could have used a little help from his best friend on tour. Schauffele (71) missed a 7-foot birdie putt on the last hole that would given him third place and moved Scheffler to fourth.

That would have made Cantlay the No. 1 seed, which comes with a two-shot lead before the Tour Championship begins. Now he will start two shots behind Scheffler, who had missed a short par putt on the last hole that ultimately didn’t cost him in the FedEx Cup.

Stallings has gone 238 starts since his last victory eight years ago at Torrey Pines, and he played like that drought might end. But he missed four birdie chances inside 18 feet at the end, the last one from just inside 10 feet.

The consolation prize is his first trip to the Tour Championship.

“That was the biggest goal of the year,” Stallings said. “Better late than never.”

Stallings wasn’t alone. Adam Scott is making his way back to East Lake. He was at No. 77 in the FedEx Cup when the postseason started and a tie for fifth last week moved him to No. 45.

Scott made eagle on the 12th hole and hit some superb lag putts on firm, crispy greens at Wilmington for a 71 to tie for fifth.

Needing a par on the last hole, Scott tugged his tee shot to the edge of a bunker, meaning he had to stand in the sand and try to hit out of a sticky first cut with the golf ball about thigh-high. He pulled that into a bunker, then hit a splendid shot to tap-in ran.

“I guess that’s the beauty of the FedEx Cup playoffs the way they are. You can scratch it around a lot for the year and have a couple good weeks and get heavily rewarded by getting to East Lake and being in that top 30 and all the perks that come with it,” Scott said.

Aaron Wise had a 73 and earned the 30th spot. He was among four players who moved into the top 30 who are eligible for the Tour Championship. The others were Stallings, Scott, Aaron Wise and K.H. Lee, who had a 65 on Sunday to tie for fifth.

DIVOTS: The Presidents Cup qualifying ended Sunday. The six qualifiers for the U.S. team are Scheffler, Cantlay, Schauffele, Sam Burns, Justin Thomas and Tony Finau. The leading eight qualifiers for the International team are Cameron Smith, Hideki Matsuyama, Sungjae Im, Joaquin Niemann, Joohyung “Tom” Kim, Adam Scott, Corey Conners and Mito Pereira. … Collin Morikawa made a quintuple-bogey 10 on the 12th hole and shot 79, his highest score in his three years on the PGA Tour. … Viktor Hovland made an ace on the second hole. He didn’t win a car, but BMW donated a full four-year scholarship to a caddie from the Evans Scholars Foundation. 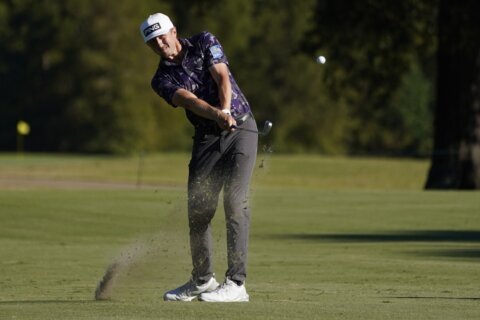 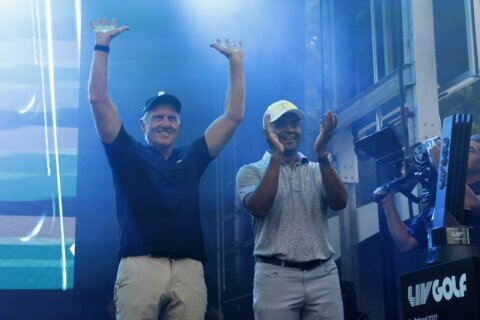 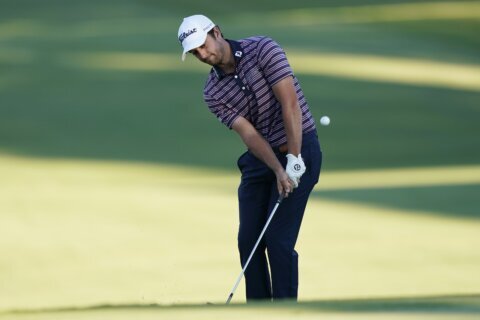