DETROIT (AP) — The Rocket Mortgage Classic, nestled between the British Open and FedEx Cup playoffs, could have been a tournament to skip for all of the world’s best players.

Patrick Cantlay, though, and four more players in the top 20 are in Detroit week.

Twenty-eight of the top 100, doubling the total from last week at the 3M Open, will start the first round Thursday at the Detroit Golf Club.

Playing to improve positioning in the FedEx Cup standings, possibly for a spot in the Presidents Cup for top players, or just meeting the season minimum for events also drove some to the Motor City.

“It’s the deepest field we’ve had,” Jason Langwell, executive director of the Rocket Mortgage Classic that made its debut in 2019. “No other event in golf this weekend around the world will be able to say that.”

Was that a thinly veiled shot at the Saudi Arabia-funded LIV Golf tour?

“We only compare ourselves to being bigger and better than we were the year before,” Langwell insisted.

Last year, Cam Davis holed a 50-foot sand shot on the 71st hole of regulation and went on to win a five-hole playoff against Troy Merritt and Joaquin Niemann to win the Rocket Mortgage Classic for his first PGA Tour victory.

The tournament was a relative success despite being stuck with a spot on the PGA Tour calendar that included the July 4 holiday, and defending champion and Rocket Mortgage ambassador Bryson DeChambeau missing the cut with an uninspiring performance after parting ways with caddie Tim Tucker on the eve of the tournament.

DeChambeau joined Phil Mickelson, Dustin Johnson and others for the riches from Saudi Arabia’s sovereign wealth fund and pitches from Greg Norman that LIV Golf is the future. PGA Tour Commissioner Jay Monahan has said players who sign up for a Saudi golf league will lose their PGA Tour membership, and should not expect to get it back.

LIV golf has its third event of the season and second in the United States this week at Trump National in New Jersey with 10 of the top 50 players and none among the top 15.

Max Homa, No. 20 in the world, said LIV golf has given PGA Tour players something to discuss about talking asking about their families.

“Now, it’s can you believe so and so is not on tour anymore?” Homa said.

Cantlay said he will not be in the next wave of players to leave the PGA Tour.

“I don’t have any plans at the moment to leave after the FedEx Cup,” Cantlay said.

Homa said no one on the PGA Tour feels the need to validate anything relative LIV golf, which seemed to pick spots on the calendar to compete with the world’s top golf circuit when it would have weaker fields.

“The last LIV event went against the John Deere — which typically doesn’t have the top, top guys — and this one typically has an OK field,” Homa said. “It is interesting that this is the first time I’ve played during a LIV event. Typically, I’m home and reading about the contracts and comparisons of the field and it’s kind of exhausting.”

Will Zalatoris, ranked No. 13, said he’s playing in Detroit simply because he should be on a course competing at the age of 25.

“If you ever hear me talk about being tired, I think I probably need to get my head checked,” he said. “It’s a wild time for the PGA Tour and I guess golf as a whole.”

Cantlay is clearly not tired either, playing for the sixth time since early June. Next month, he will shoot to be the first to win the FedEx Cup in consecutive years since it was awarded for the first time in 2007 to Tiger Woods.

“That’s the goal now that the majors are done with for the year,” he said. “That’s the biggest prize left on the schedule.”

Finishing in the top 125 in the FedEx Cup standings, and securing a spot in the playoffs and a full card for next season, is also a reward some will be chasing this week in Detroit and next week when the regular season ends at the Wyndham Championship in North Carolina. 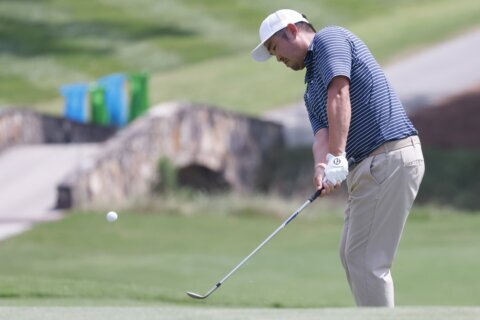