TULSA, Okla. (AP) — The cheers were set to echo across the Andes. They were silenced by the splash of…
Listen now to WTOP News WTOP.com | Alexa | Google Home | WTOP App | 103.5 FM

TULSA, Okla. (AP) — The cheers were set to echo across the Andes.

They were silenced by the splash of a small white ball into a shadowy creek half a world away.

Mito Pereira’s errant tee shot on the final hole of regulation in Sunday’s PGA Championship at Southern Hills sent the tour rookie tumbling to a double-bogey 6 that erased his one-stroke lead and knocked him out of a playoff.

When Pereira’s bogey putt slid past the hole, Chile’s first major championship slipped away. So did a career grand slam for South America. Justin Thomas beat Will Zalatoris in a three-hole playoff to claim the Wanamaker Trophy.

“Today I was really nervous. I tried to handle it a little bit but it’s really tough,” Pereira said. “I thought I was going to win on 18, but it is what it is. We’ll have another one.”

The pressure had been building. Pereira held a three-stroke lead when the final round began. After his fourth bogey of the day, he was tied for the lead with six holes to play. But he birdied the par-5 13th hole and still led by one stroke when he lined up a 13-foot birdie putt on No. 17.

The putt was tracking toward the hole but stopped on the edge of the cup.

Pereira tapped in for par and headed to the final tee box to face his nerves and the massive gallery lining the fairway all the way to the green.

The 490-yard, par-4 18th played as one of the toughest holes at Southern Hills all week. Pereira could have played it safe with a long iron or fairway wood off the tee. He instead chose driver and an awkward swing and follow-through sent his ball sailing right and toward the creek.

He likely knew the result from the groan of the gallery.

Phil Mickelson at Winged Foot in 2006 was the last player to lose a major with a double bogey on the closing hole — and, like Pereira, Lefty hit an unnecessary driver on No. 18.

Latin American players have a rich history in golf, but few have contended in major championships. Only two, both from Argentina, have won: Roberto De Vicenzo by two shots over Jack Nicklaus in the 1967 British Open at Hoylake, and Angel Cabrera, who won the U.S. Open in 2007 and the Masters two years later.

Pereira led a roster of six South Americans at this year’s PGA Championship who could yet become a consistent force in the game’s biggest tournaments.

His career had been slowly building before he found the spotlight at the PGA.

He was a junior star in Chile when he left the country for the IMG Academy in Florida, then quit the game for two years to renew his interest. After pulling his clubs out of the garage, he played one year at Texas Tech before turning pro at age 20 in 2015.

Pereira was the Korn Ferry Tour player of the year in 2021. His biggest stage before this week was the Tokyo Olympics, where he lost a playoff for a bronze medal.

Countryman Joaquin Niemann, who finished tied for 23rd, was beaming with pride as his friend battled through the back nine with the lead.

“You look back, three, four years ago, nobody talked about golf (in Chile), and now the whole country is watching TV right now seeing Mito leading the PGA Championship,” Niemann said while Pereira was still leading. “It’s a major, and yeah, it’s going to be something huge, and I think that he’s going to help a lot the game in Chile and in Latin America.”

A half-hour later, Niemann was sitting near the 18th green, wiping his face and checking his phone as the final groups came in. After Pereira finished out of the playoff, he and Niemann greeted each other with smiles and shook hands.

The last PGA Tour rookie to win a major was Keegan Bradley at the 2011 PGA Championship.

“Mito is a lovely kid. A really nice, down-to-earth kid,” said Matt Fitzpatrick, who played in the final group with Pereira and closed with a 73.

“When that happens, it is tough to take. You hope it’s not you, and it’s tough to see,” Fitzpatrick said. “He finishes with a par and he’s won the PGA. You definitely feel for him, and I’m sure he’ll have many chances again.” 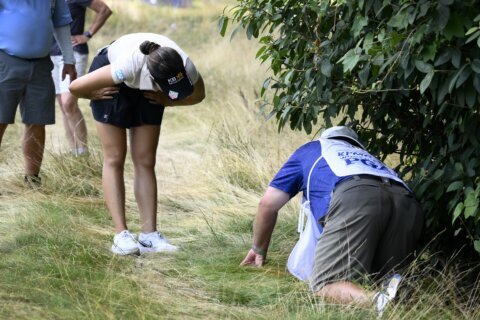