SAN ANTONIO (AP) — J.J. Spaun won his first PGA Tour event — and his first trip to the Masters — by firing a final-round 69 at the Valero Texas Open on Sunday.

In his 147th PGA Tour start, Spaun survived a double-bogey start to his round by recording five birdies with no bogeys to finish at 13-under at TPC San Antonio. It gave him a two-shot margin over Matt Kuchar (69) and Matt Jones (66).

“I was thinking about the Masters last night,” Spaun said. “But I think a year ago, to think I would even be here playing on tour, I’d have to do a lot of work. To finally get a win, it’s what you dream about.”

In October, Spaun was ranked No. 396 in the World Golf Rankings. It followed a 2020-21 season where he missed more cuts than he made, including a missed cut at the Texas Open, and only one top-10 finish. He had to play in the PGA’s Korn Ferry Tour last year to retain his tour card.

The 31-year-old Spaun closed with four straight pars, and no one could close in on him. His previous best finish on tour was runner-up in 2018 at the RSM Classic. Sunday’s tournament win includes a $1.54 million check.

Jones missed a 3-foot par putt on the 16th, birdied the 17th and missed a 14-foot birdie putt on the final hole.

“It was a good weekend,” Jones said, “but I had a good round going Thursday and let it slip, and then Friday I just played poorly and made a couple of mistakes. Those mistakes are what cost golf tournaments. Yeah, I played great today.”

Kuchar needed a birdie on the final hole and Spaun to make bogey to force a playoff. Spaun found trouble off the tee in the left rough, but Kuchar’s second shot went into the water. Spaun reached the green of the par-5 finishing hole in three and his final putt was less than two feet.

It was a missed opportunity to get back to the Masters for Kuchar and Brandt Snedeker, who shared the lead after the first two holes Sunday. Between them, they have 26 Masters appearances, seven top 10s and each has a top-3 finish.

Snedeker finished tied for 18th after a 75.

Spaun’s double-bogey final round start before getting the victory is so rare that the last time it happened on tour came in 2008, when Tiger Woods won the U.S. Open victory (and Woods needed a playoff the following day).

“It didn’t bother me as much as you would think,” Spaun said. “I knew there was a lot of golf. I’d rather double the first hole than the last hole.”

Spaun took the lead with a birdie after nailing his approach into the 11th to three feet away. Jones’ birdie at the 17th cut it to one, but Spaun answered with a birdie at the par-5 14th after getting almost pin high in the greenside bunker. He hit to nine feet and made the putt to go back to two ahead.

Spaun nursed the lead, making a 6-footer for par at 15, chipping to 5 feet away and making the par putt on the 16th and on 17, knocking in par from 4 feet.

“I was thinking, what could I do to get a top 10, not win the tournament,” Spaun said.

He also double-bogeyed the 9th hole on Saturday. Yet he birdied the tough 9th on Sunday, one of five on the day.

Keegan Bradley, who shot a final-round 66, finished in a tie for eighth at 9-under with Matthias Schwab (68), Gary Woodland (70) and third-round co-leader Dylan Fittelli (73).

Frittelli’s chances started to slip after he walked to the 9th tee following a birdie at 8. His tee shot ran down a cart path straight into cactus. Frittelli pulled the ball away from the spines and took an unplayable and managed bogey to fall two shots back. 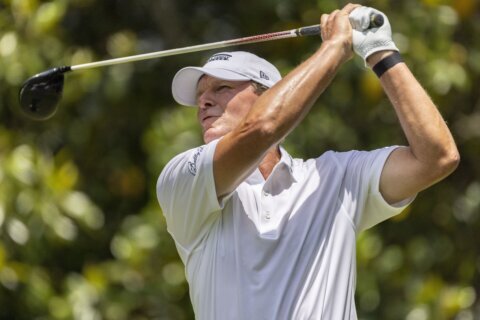