Masters Day 2: All eyes on Scheffler, wind as weekend looms

AUGUSTA, Ga. (AP) — The weekend couldn’t come soon enough for players at the Masters, who really had only two choices as the sun began to set on Augusta National and the reality of their situation became clear.

They could watch Scottie Scheffler roll in birdie putts and wonder why more of theirs don’t go in, too.

Or they could study the weather and hope the wind howls through the tall Georgia pines.

Tiger Woods didn’t need to announce what group he’s in.

We haven’t had a leader like Scheffler in a while, either. He’s got a five-shot lead that looked stunningly easy to craft and, more importantly, perhaps, he’s got history on his side.

Just five times before in Masters history has a player had a five-shot lead going into the weekend. The last four times the player won, most recently in 2015 when Jordan Spieth picked up a green jacket.

And all Scheffler needs to do is play the same kind of competitive crushing golf he’s been playing all year.

“As long as I’m committed to everything, everything should be fine,” the Texan said. “The rest really isn’t up to me.”

That kind of calm attitude has made this a breakthrough year for Scheffler, who suddenly finds himself the No. 1 player in the world. After his first win in February in Phoenix he added two more championships to his collection, including two weeks ago at the Match Play in San Antonio.

For those keeping score at home, that’s three wins in five tournaments.

Those were nice, and those were important. They paid good money and probably already have made Scheffler the player of the year.

But this is the Masters. The winner gets a green jacket and all that goes with it.

The weekend pressure can be suffocating. What looked doable on Friday may not be on Sunday.

Oh, and then there’s Woods, who lurks nine shots back but still has hopes of contending. And, really, who’s going to count him out after all he already has overcome?

Those may be little more than wishful thoughts for Woods, no matter the number of green jackets he already has won (5) or his familiarity with every blade of grass on the golf course he loves most.

But a guy’s got to have something. And he’s not the only one holding out hope.

“He clearly has control of everything right now based off the last couple of months, so I’m not too surprised,” said Justin Thomas, who matched Scheffler’s 67 but was still seven shots back. “But yeah, I would appreciate it if he would stop going too far away.”

If there’s anything that can shake Scheffler — and with three wins in his last five starts it’s hard to figure what that might be — there are three former champions who are within six shots of him.

That’s a lot of golf firepower and Augusta National is a lot of golf course. Strange things can happen on a weekend when the wind blows, especially if the greens dry out more and the shots become that much tougher.

Scheffler is only in his third Masters, so he’s not one to judge history. Up until February he hadn’t even won a tournament on the PGA Tour.

A few early birdies by Woods, a few big roars echoing across the landscape can do damage to a player’s psyche.

Besides, as lore goes, nothing ever starts at the Masters until the back nine on Sunday.

“If you’re within five or six on that back nine going into Sunday you’ve got a chance,” Woods said. “So I just need to get there.”

A tall task, sure, but what does Woods have to lose?

Remember, he wasn’t supposed to be here anyway. 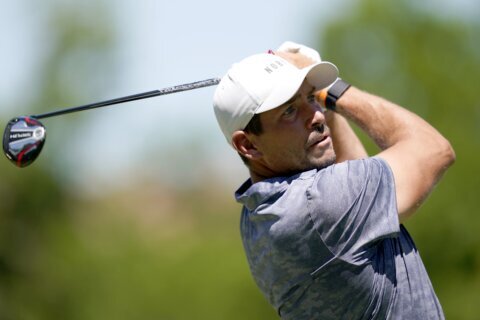