Column: Faint signs of progress at the home of the Masters

AUGUSTA, Ga. (AP) — The only color Harold Varner III was focused on at his first Masters was red.

And maybe, if he let his mind wander just a bit, there was a thought of green.

As in a green jacket.

Hardly looking like a rookie in the increasingly fierce conditions at windy Augusta National, the 31-year-old North Carolinian posted his second straight below-par round on Friday — a pair of red numbers that pushed him into contention heading to the weekend.

But let’s talk about another color.

Varner is Black, and he’s apparently part of something unprecedented at a course that cherishes its history and traditions as much as any other, even though many of them are relics of a much uglier era.

It’s believed to be the first time that three Black golfers — in this case, Varner, Tiger Woods and Cameron Champ — have been part of a Masters field.

Coming on the heels of America’s racial reckoning in the summer of 2020 and the death a few months ago of Augusta pioneer Lee Elder, the significance of this moment should not be ignored.

But it shouldn’t be made into something bigger than it is.

A quarter-century removed from Woods’ historic first Masters victory, there are still far too few Black players in golf’s pipeline. A sport that long discriminated against people of color still has an awful long ways to go to get more of them on the course.

Think of it this way: Three Black golfers represent a mere 3.3% of the 91 players who qualified for the first major of the year. Woods remains the only Black golfer to win a major championship.

Varner knows that a lack of access is one of the big problems facing potential Black golfers.

This is an expensive sport to play. The best courses are rarely located in Black communities. Varner hopes that his Masters debut will help to break down some of those barriers.

It’s understandable that Varner wants to be known as more than a Black golfer. He wants people to respect him for the quality of his shots rather than the color of his skin.

“I’ve never been asked about being a Black golfer until I got on the PGA Tour,” he said.

Of course, it was more than economics that kept Black golfers off the best courses for the bulk of the sport’s history.

The PGA of America had a repulsive “Caucasian-only” rule until 1961. It wasn’t until 1975 that Elder became the first Black player to qualify for the Masters. Augusta National didn’t allow its first Black member until 1990 — and only then to slide through the controversy over Shoal Creek Country Club hosting the PGA Championship while refusing to allow Black golfers as members.

Augusta National’s sexist side also was rekindled this week, when Chairman Fred Ridley was asked about the 10th anniversary of the club allowing women as members.

Yep, that no-brainer of a decision was a mere decade ago.

“Our culture is better,” Ridley said, sounding almost apologetic that it took so long. “We are a better club, a better organization, and we’re proud to have women among our membership.

“When anything happens or any idea that you had turns out well and you’re pleased about it, you might always say, ‘Well, why didn’t we do that sooner?’ That’s a fair thought. I wish we would have.”

The same applies to Augusta National’s approach to racial matters.

It was only after protests rocked the nation in the summer of 2020 that the club felt compelled to really get involved.

Elder was invited to hit the ceremonial opening tee shot at the 2021 Masters, though by then — at the age of 86 — he was too feeble to actually swing the club alongside Jack Nicklaus and Gary Player. That would be Elder’s final Masters; he died this past November.

Augusta National also funded golf scholarships in Elder’s name for historically black Paine College, as well as backing the start-up of a women’s golf program at the school located a mere 4 miles from Magnolia Lane.

Maybe if Augusta National had gotten behind these sort of initiatives 20 or 30 years ago, instead of clinging stubbornly to the past for far too long, there would have been more than three Black players at the this Masters.

But, for now at least, we’ll have to be content with the faint signs of progress that will be on display this weekend at the Masters.

Varner will be playing in the one of the final groups Saturday. Champ was assured of making the cut. And Woods, in his first competitive tournament since a devastating car wreck 14 months ago, advanced to the weekend after an electrifying opening round.

As he prepared to putt on No. 18, Varner even allowed himself to think about what might happen Sunday evening.

Let’s hope others are thinking about it, too.

Never before have kids of color had so many players they could relate to at Augusta National.

“I think it represents that those guys have played really well,” Varner said. “In professional sports, that scoreboard doesn’t read color.” 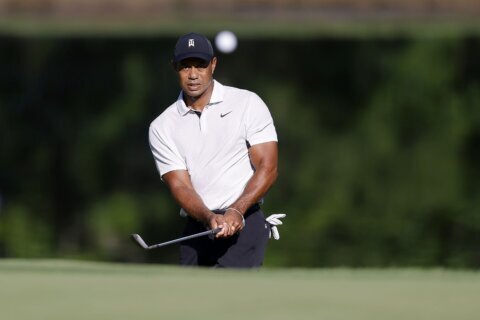