Reid and Maguire give Europe 9-7 lead at Solheim Cup

TOLEDO, Ohio (AP) — Catriona Matthew had a feeling about Leona Maguire and Mel Reid. Or maybe it was just luck. The European Solheim Cup team captain isn’t sure which. She also doesn’t care.

All Matthew knows is that it’s working.

“They’ve kind of reveled in each other’s company,” Matthew said.

Giving their team a shot at capturing the Cup on foreign soil for just the second time in 31 years in the process.

Fueled by the steely Maguire’s putting and a rainbow of an 8-iron by the fiery but aching Reid, Europe took a 9-7 lead into the closing singles matches Monday as it tries to repeat as Solheim Cup champions.

Reid and Maguire finished the weekend unbeaten in three matches after crushing world No. 1 Nelly Korda and Ally Ewing in alternate-shot play Sunday morning and scrambling to tie Jennifer Kupcho and Lizette Salas in four-ball in the afternoon.

Not bad for two players there were virtually strangers when they arrived at Inverness last week. The reserved 26-year-old Maguire, the first Irishwoman to make a Solheim Cup team, and the outgoing, charismatic 33-year-old Reid will leave as friends. Perhaps winners too after Reid overcame a throbbing right shoulder to deliver the shot of the day and maybe her international career.

Kupcho gave the Americans the lead in the last active match on the course when she chipped in from the fringe on the par-4 17th.

Reid, a four-time Solheim Cup veteran who received medical attention during the round to deal with shooting pain in her back and right shoulder, responded by hitting a towering 8-iron into the wind from 136 yards that bounced on the collar of a front greenside bunker before rolling to practically tap-in range.

“I knew as soon as I hit it it was either going to be a little bit left and short or it was going to be good,” Reid said. “So I was hoping for the good, and I almost willed that ball into the hole.”

Salas and Kupcho both saw their birdie putts drift wide, and when Reid quickly knocked in her 3-footer, Europe had a little bit of wiggle room going into singles.

“I mean, listen, the momentum has gone back and forth,” Reid said. “That’s what a Solheim Cup is. That was a huge half-point for us. That makes it a very nice afternoon for us and a nice little two-point lead going into (singles).”

The Europeans need just five out of a possible 12 points on Monday to keep the Cup, while the Americans need 7 1/2 to wrest it back. Being up after two days hasn’t always been a good thing for the visitors.

Eight times the Europeans have found themselves up after 16 matches. They’ve only gone on to win on four occasions, the last in 2013 when they scored their lone triumph in the U.S. at Colorado Golf Club.

“It’s going to be tight,” said Matthew, who guided Europe to victory at Gleneagles two years ago. “It always seems to come down to the singles. Every little half-point here or there is going to be crucial.”

What happens in between will likely determine who gets to raise the crystal 20-plus pound trophy on Monday night. U.S. captain Pat Hurst remains confident even with two of her stars struggling a bit.

Nelly and Jessica Korda were nearly unstoppable two years ago in Scotland. Things haven’t gone nearly as smoothly for the sisters in northwestern Ohio, even with two-time Masters champion Bubba Watson offering advice while serving as a volunteer assistant for Hurst.

The Kordas are just 1-3 at breezy Inverness. Nelly Korda’s round during her and Ewing’s 5-and-4 loss to Reid and Maguire included a bladed pitch from a fairway bunker that sailed out of bounds, a chunked approach shot and a chip from the fringe that only made it halfway to the hole before hitting reverse.

Hurst remains optimistic the Kordas will play vital roles in a potential comeback. Nelly Korda and Georgia Hall will go out fourth, with Jessica Korda facing Charley Hull in the penultimate match of the biennial event.

“I need them for my singles matches,” Hurst said. “That’s where we usually shine.”

The Americans typically do. The U.S. has posted the better singles mark nine times in 16 Solheim Cups. On all but one of those occasions, they’ve won singles by more than the 2 1/2-point margin they’ll need on Monday if they want to reclaim the Cup.

It’s a deficit the Americans believe they can handle. It sure beats the alternative. For a brief period on Sunday morning, the U.S. trailed in all four alternate-shot matches. A rout appeared in the offing.

The Americans recovered to win three of them to get back into contention and had the lead on the back nine in three of the four four-ball matches. Only rookies Mina Harigae and Yealimi Noh held on to win outright after Reid’s brilliant flick on the 18th rescued a half-point for Europe.

“I think it’s difficult to not look at leaderboards,” Reid said. “It was very red there for a minute, so to turn it around and have the afternoon that we did, have a two-point lead is an incredible result for us.” 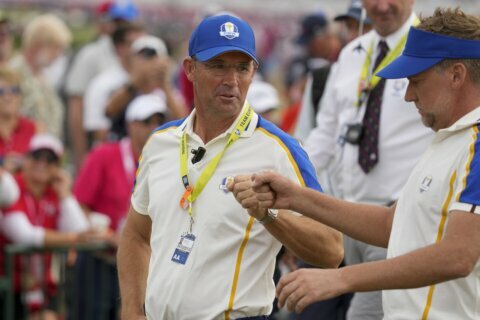