Oosthuizen turns to 3M Open with British collapse behind him

After letting a major title slip away for the third time this year, Louis Oosthuizen tried to quickly pivot to his next opportunity.

He’s hoping the disappointment and doubt of losing the final-round lead Sunday in the British Open were left behind at Royal St. George’s, or at least somewhere over the Atlantic Ocean while he flew on a charter carrying 30 players from the season’s final major to Minnesota for the 3M Open.

“I think I’m glad that I entered in this event to sort of get back in there and play and not really sit around at home and thinking about the disappointing Sunday last week. I’m happy to be out here, see the golf course and looking forward to this week,” Oosthuizen said after playing in a pro-am Wednesday at the TPC Twin Cities in Blaine, a suburb of Minneapolis that first hosted this PGA Tour stop in 2019.

Oosthuizen, the late-blooming, eminently likeable, gap-toothed, 38-year-old South African, shot a 71 on Sunday to tie for third at the British Open. He won the event in 2010.

Though he has never won a regular PGA Tour event, his uncommon surname has been one of the biggest in golf this summer. He was second to Phil Mickelson at the PGA Championship in May. He gave away the U.S. Open in June with a final-round tee shot into a canyon on the 17th as Jon Rahm took over and Oosthuizen tied for second. Collin Morikawa snagged the claret jug at the British Open, and Oosthuizen uncharacteristically left the course without addressing reporters.

“In the end I was just too far behind and needed to force things and just couldn’t make up the shots,” Oosthuizen said. “It’s sort of you don’t want to always talk about close again, finishing second, finishing third, so I wasn’t really up for that conversation right there.”

By the next day, Oosthuizen said, he was already feeling better.

“Collin played the way you should play to win a major, especially on a Sunday. He didn’t make many mistakes, and when he did make a mistake, he made unbelievable up-and-downs for pars. It was just frustrating because I knew my game was definitely there to have a good solid day,” said Oosthuizen, who is one of six players in the 156-player field who turned down a spot in the Olympics. The others are Dustin Johnson, Sergio Garcia, Emiliano Grillo, Rafa Cabrera Bello and Camilo Villegas.

This will be Oosthuizen’s first appearance in the 3M Open. He’ll tee off Thursday in a fan-favorite trio with Johnson and Bubba Watson.

With the heavy COVID-19 restrictions in Tokyo for the Summer Games and the World Golf Classic due up in two weeks as the FedEx Cup race (he’s currently 13th) enters the final stretch, Oosthuizen opted out of the chance to get a gold medal. There’s the Race to Dubai competition on the European Tour (he’s in third place) to keep in mind, too.

Johnson (No. 2), Oosthuizen (No. 9), Patrick Reed (No. 13) and Tony Finau (No. 19) are the only top-20 players in the world ranking entered in the 3M Open, which was won last year by Michael Thompson and Matthew Wolff in 2019. Johnson withdrew due to back stiffness after a first-round 78 last year.

Johnson recovered from that injury to win his first FedEx Cup. He’s currently 15th in the standings and eager to see and hear the fans on the course in Minnesota that were missing last year.

“The golf course, it’s in perfect condition,” Johnson said. “I enjoyed playing it last year, so I wanted to come back and play again. 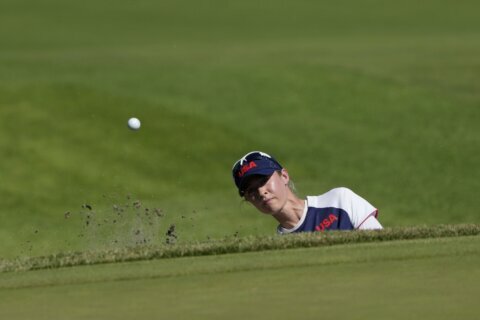