FAIRFIELD, Conn. (AP) — Annika Sorenstam shot an even-par 72 on Saturday to take a two-stroke lead into the final round of the U.S. Senior Women’s Open.

The 50-year-old Sorenstam, a three-time U.S. Women’s Open champion making her first appearance in the senior event, had an 8-under 208 total at Brooklawn Country Club. Husband Mike McGee is working as her caddie.

“It was a roller-coaster,” Sorenstam said. “It was not as solid as the first two days. A few putts falling would have made it really sweet.”

Playing partner and fellow Swede Liselotte Neumann was second, closing with a bogey for a 71. She won the 1988 U.S. Women’s Open to become the first Swedish major champion.

“A little bit up and down today,” Neumann said. “Good putting, good short game, and I think starting the back nine, I started to get a little bit more comfortable. Overall, it sort of got better and better as the day went.”

Sorenstam has pointed to the championship since turning 50 in October.

“I would love to do well, of course,” Sorenstam said. “That is why I came here. I feel like I’m as prepared as I can be. I just want to trust myself and enjoy the walk. Hopefully I can keep it in the short grass.”

European Solheim Cup captain Catriona Matthew was 4 under after a 71. Laura Davies (68) and Yuko Saito (74) were 2 under, and Kris Tschetter was even par after a 75. 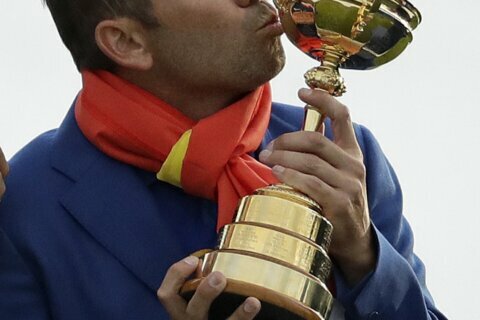