After leaving Quail Hollow after thinking he was eliminated, Bryson DeChambeau returned to the Wells Fargo Championship on Saturday morning and climbed briefly into the top 10 with five birdies in 14 holes, only to make double bogey on the 18th for a 68.
Listen now to WTOP News WTOP.com | Alexa | Google Home | WTOP App | 103.5 FM

CHARLOTTE, N.C. (AP) — Bryson DeChambeau went through an ordinary routine between the second and third rounds of the Wells Fargo Championship. He went out to dinner. He got in a workout. He slept about seven hours.

There’s just one minor detail: He flew home to Dallas because he thought he had missed the cut.

His 1,870-mile journey behind him, DeChambeau made it back to Quail Hollow on Saturday morning with about an hour to spare. And then he climbed briefly into the top 10 with five birdies in 14 holes, only to make double bogey on the 18th for a 68.

All in a day’s work.

“For whatever reason, I just feel like the more weird things happen to me, the greater my resolve sometimes can be,” DeChambeau said. “And today was a case of that.”

It all started on the seventh hole Friday, his 16th of the round, when DeChambeau hit two balls into the water and took a triple-bogey 8. He chipped in for birdie on the next hole, but figured he would need a birdie on his last hole to have any chance. He missed, shot 74 and walked off the course just outside the top 90.

The top 65 and ties make the cut. DeChambeau packed his bags.

And then the wind began raging at Quail Hollow, scores came down and his position kept going up. He was in the air when his agent texted close friend Conner Olson, flying with him, that DeChambeau was tied for 68th.

He still thought it wouldn’t be enough as the wind died late in the afternoon. But it was. When the round was over, DeChambeau was tied for 64th to make the cut.

He also was in Dallas.

DeChambeau said he looked over at Olson and said: “Well, whoops. That was a mistake.”

The fun was just starting. DeChambeau has a deal with a private jet company, but with time required to refuel and book a flight back to Charlotte, he figured he might as well stay at home for a bit. He worked out for an hour. He went out to eat.

DeChambeau did well to arrange a flight for 2:45 a.m. in Dallas, allowing him five hours’ sleep before heading to the airport. He picked up two more hours of sleep on the plane, landed at 6:20 a.m., drove a half-hour to Quail Hollow, changed clothes and off he went.

It was an expensive mistake, though DeChambeau figured he could compensate for it with a good weekend. To finish 20th, for example, would pay roughly $100,000.

DeChambeau might have been running on fumes when he arrived, but it didn’t show. He made birdie on all the holes that present scoring chances, and then it all came crashing down at the end.

He plays the 18th hole differently than most — DeChambeau sees a lot of things differently — and for the second time this week purposely hit a hard draw left of the creek that meanders down the left side of the fairway. But it didn’t go high enough up the hill, leaving him an approach with the ball below his feet.

He pushed that into a plugged lie in the bunker, leaving him no chance at a left pin because the ball likely would have rolled through the green into the creek. So he chipped it out of the pitch mark, still in the bunker, blasted out to 10 feet and missed the putt, making double bogey.

But at least he’s at Quail Hollow, still playing. He has one more round to move up the leaderboard, make a few extra bucks to pay for that extra flight, before going to his next tournament — in Dallas, of course.

It was reminiscent of Geoff Ogilvy leaving what is now the Valspar Championship in 2010, getting word in the airport that he had gone from a tie for 83rd to a tie for 72nd. He couldn’t get his golf clubs off the commercial flight and wound up flying home to Phoenix, getting a private flight back to Florida and shooting 65.

DeChambeau played the third round with British Open champion Shane Lowry, who also thought he was going to miss the cut when he finished at 2-over 144 on Friday. Lowry has friends in Charlotte and hung around. He shot a 75 on Saturday.

Lowry walked off the 17th green, able to smile at the day’s misfortunes and said, “It’s days like this you wish the wind didn’t blow yesterday afternoon.” 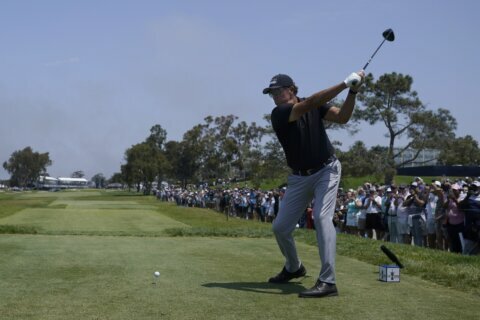 The Latest: Rahm moves into U.S. Open lead with birdie on 18 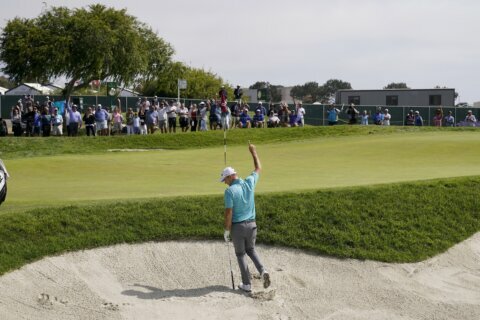