AUGUSTA, Ga. (AP) — The Latest on the Masters, the first golf major of the year (all times EDT):

Hideki Matsuyama has delivered golf-mad Japan the grandest and greenest prize of all.

A decade after Matsuyama made a sterling debut as the best amateur at Augusta National, he claimed the ultimate trophy with a victory in the Masters.

Matsuyama becomes the first Japanese winner of a men’s major championship. He’s just the second male from an Asian country to capture a major, following Y.E. Yang of South Korea at the 2009 PGA Championship.

Moments before Dustin Johnson helped him into the green jacket, Matsuyama needed no interpreter in Butler Cabin when he said in English, “I’m really happy.”

Never mind that Matsuyama bogeyed three of his last four holes, making him the first Masters champion with a final round over par since Trevor Immelman shot 75 in 2008.

All that mattered was that uphill walk to the 18th green. He blasted out of the bunker and took two putts to seal a one-stroke victory over Masters rookie Will Zalatoris.

Matsuyama says he hopes to be “a pioneer and many other Japanese will follow.”

Hideki Matsuyama has made history as the first male golfer from Japan to win a major championship.

Matsuyama held on after knocking one in the water at the 15th, shooting a 1-over 73 to win the Masters by one stroke.

Arriving at Augusta as a five-time winner on the PGA Tour, Matsuyama took control of the tournament with a brilliant 65 on Saturday, doing his best work after a rain delay.

Xander Schauffele closed within two strokes after Matsuyama made bogey at No. 15. But Schauffele put one in the water at the 16th and took the first triple-bogey of his major championship career.

That cleared the way for Matsuyama to claim the green jacket. He made a bogey at No 18 but that was enough to hold off Masters rookie Will Zalatoris, who stamped himself as a future star with a 9-under 279.

Matsuyama was one shot better at 278.

Hideki Matsuyama is going to the final hole of the Masters with a two-stroke lead and poised to become the first male player from Japan to win one of golf’s major championships.

Matsuyama gave his challengers a bit of hope by skipping one into the water at No. 15, leading to a bogey that reduced his lead to two shots over Xander Schauffele.

But Schauffele found the water at 16, leading to the first triple-bogey of his major championship career.

The only player with any hope left is Will Zalatoris, who’s in the clubhouse with a 9-under 279.

Matsuyama is at 11 under and in good shape after his tee shot at the 18th.

Xander Schauffele’s chances of catching Hideki Matsuyama have apparently ended with the first triple-bogey of his major championship career.

Having closed within two shots of the lead after Matsuyama put one in the water at the 15th hole, Schauffele stepped up at the next tee with the confidence of having made four straight birdies.

It all fell apart when the tee shot at the iconic par-3 hole known as Redbud rolled into the pond.

Schauffele wound up with an ugly 6. Even though Matsuyama made a three-putt bogey, he still picked up two shots on his playing partner.

But Matsuyama’s lead is still rather precarious — two strokes with two holes to play at 11 under.

Masters rookie Will Zalatoris salvaged a par at the final hole after driving in the bunker. He’s in the Augusta National clubhouse with a 9-under 279.

Suddenly, there’s some drama in the final round of the Masters.

Hideki Matsuyama drove his second shot over the green at the 15th hole, the ball skipping into the pond at the next hole.

Matsuyama wound up with his second bogey in four holes. Meanwhile, playing partner Xander Schauffele pulled off his fourth straight birdie with an up-and-down from the bunker, moving within two shots of the lead.

That’s as close s it’s been since early in the round.

Xander Schauffele is trying to put some heat on Hideki Matsuyama at the Masters.

Schauffele tapped in for his third straight birdie at No. 14, pushing his score to 9 under for the tournament and within four strokes of the leader in the final group at Augusta National.

But the American is running out of time. Matsuyama is 2 under for the day, 13 under overall and merely has to avoid any major mistakes to become the first male player from Japan to win a major championship.

Will Zalatoris is the only other player within five shots of Matsuyama. The Masters rookie made a birdie at the par-5 15th to get to 8 under.

A rarity for Hideki Matsuyama.

The Masters leader made 4 after driving into a bunker behind the green at No. 12, leading to just his second bogey in the last 32 holes.

But Matsuyama still has a commanding five-stroke lead over three players: Will Zalatoris, Jordan Spieth and Xander Schauffele.

Zalatoris briefly got as close as one stroke early in the round, but the 24-year-old Masters rookie has missed several short putts to spoil his hopes of making a run at the green jacket.

Hideki Matsuyama has made two straight birdies to close out the front nine with a five-shot lead in the Masters. That leaves him nine holes away from becoming the first Japanese player to win the green jacket.

Matsuyama didn’t drop a shot after a bogey from the trees on the first hole. He made the turn at 13-under par. Will Zalatoris started with two straight birdies to briefly get within one shot. But the 24-year-old from Dallas had a three-putt bogey from long range on the 10th and was five behind.

No one else was closer than seven shots. That included Jon Rahm, who shot 66 and finished at 6-under 282.

Is it over? Jordan Spieth might say otherwise. It was five years ago when Spieth took a five-shot lead into the back nine at Augusta National. He went bogey-bogey and then put two balls into Rae’s Creek to make a quadruple-bogey 7. Danny Willett went on to win the Masters that year.

Hideki Matsuyama remains comfortably ahead at the Masters without much pressure from those chasing him — least of all, Xander Schauffele.

His pitch failed to get up the slope to the third green and rolled back to the fairway, leading to bogey. Then, he came up short into the bunker on the par-3 fourth and dropped another shot. The fifth hole, toughest at Augusta National this week, was his undoing.

Schauffele was on the edge of the bushes off the tee, couldn’t quite get back to the fairway and then hit a flyer over the green into a bunker. It took him two to get out of the sand and he had to scramble for double bogey. Just like that, he was seven shots back.

Matsuyama, meanwhile, holed an 18-foot par putt at No. 5 and was even for the day. He was three shots clear of Will Zalatoris.

The only player making a move was Jon Rahm, and he started too far back. Rahm, 11 shots back to start the final round, was 5 under playing the 15th.

Hideki Matsuyama started the day with a four-shot lead at the Masters.

For a moment, it was down to one.

Matsuyama pushed his opening tee shot into the pine straw off the right of the first fairway on his way to a bogey to begin his final round at Augusta National. Meanwhile, Will Zalatoris opened birdie-birdie — which, briefly, got him to 9 under and within one shot of Matsuyama.

Zalatoris then made bogey on the par-4 third hole, leaving his uphill par try well short.

Matsuyama got up-and-down from the sand for a birdie at the par-5 2nd hole, getting back to 11 under — pushing his lead over Zalatoris and Xander Schauffele back to three shots.

Hideki Matsuyama has teed off in the final round of the Masters with a three-stroke lead.

A five-time winner on the PGA Tour, the 29-year-old Matsuyama is trying to become the first male player from Japan to capture one of golf’s major championships.

He seized control of the tournament on Saturday with a bogey-free, 7-under 65 that pushed him to 11 under overall.

Matsuyama claimed a four-stroke lead after the third round, but Masters rookie Will Zalatoris has already clipped one shot off the margin with a birdie at the first hole.

Only four players have squandered a lead of at least four strokes going to Sunday. Rory McIlroy was the more recent to do it in 2011.

Matsuyama is playing in the final group with American Xander Schauffele, who is at 7 under along with Australia’s Marc Leishman and England’s Justin Rose.

Zalatoris is a 24-year-old American who doesn’t even have a full PGA Tour card. He is trying to become the first player since Fuzzy Zoeller in 1979 to capture a green jacket on his first attempt.

Billy Horschel has made another stop at Waterworld.

After playing barefoot out of the creek at Augusta National’s 13th hole for the second day in a row, Horschel flew the green with his second shot n No. 15, the ball skipping all the way into the pond at the next hole.

He took a penalty drop and wound up with a bogey 6.

Horschel bounced back with a birdie at the 16th — yes, he managed to avoid the pond this time.

Thankfully for the Floridian, he doesn’t have to worry about any more aqua misadventures at the final two holes of the Masters. Neither has any water hazards.

Horschel created a stir Saturday by slipping barefoot down a slope before playing a ball from the water on the par-5 13th hole. The shoes came off again on the 13th on Sunday, though the only thing that slipped this time was Horschel down the leaderboard.

His tee shot landed in the water, so just like Saturday, he removed his shoes and socks and rolled up his pant legs over his calves to go try to play the ball. He only advanced it a few yards, not getting it back to the fairway, then tried to hack at it again from a combination of grass, mud and rocks — before taking an unplayable lie and moving on.

The final damage: A triple-bogey 8, dropping him from 41st to 50th on the leaderboard and to 6 over for the tournament.

The final round of the Masters has started with all the familiar pin positions for Sunday at Augusta National.

Hideki Matsuyama takes a four-shot lead into the final round. He is trying to become the first Japanese player to win a major and the second major champion from an Asian country. (The first was Y.E. Yang of South Korea in the 2009 PGA Championship at Hazeltine.)

It’s never easy at Augusta National. In November, Dustin Johnson had a four-shot lead that was trimmed to one shot after only five holes. He recovered with a birdie and went on to win by five. Rory McIlroy lost a four-shot lead after 10 holes in 2011 when he shot 80 in the final round.

The most famous was Greg Norman losing a six-shot lead in 1996.

Xander Schauffele, Justin Rose, Marc Leishman and Will Zalatoris were all four shots behind Matsuyama. Rose is the only major champion in that group. Zalatoris is trying to become the first player in 42 years to win a green jacket in his first attempt. 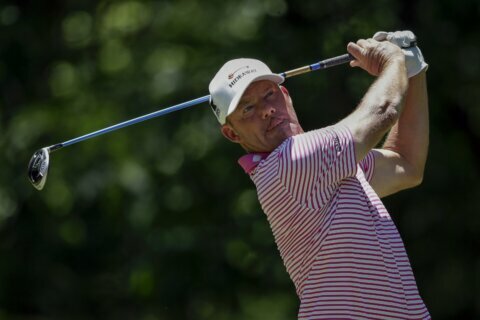 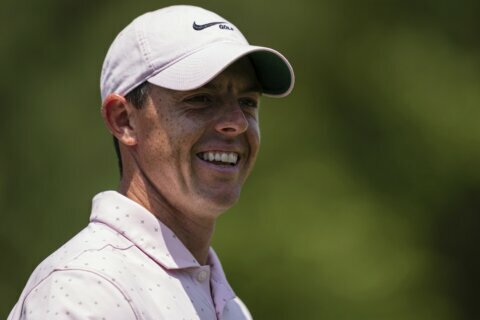