Bradley ends with eagle and ties Burns for Innisbrook lead

PALM HARBOR, Fla. (AP) — Sam Burns kept piling up birdies Friday, turning a solid start into a great round of 8-under 63 for a share of the lead in the Valspar Championship.

Keegan Bradley got there with one shot.

Bradley ended his round by holing out for eagle from 100 yards in the ninth fairway, over a deep bunker to the elevated green. The shot left him guessing until he saw the fans jump out of their seats. That gave him a 66 and the best uphill walk at Innisbrook.

“I turned a good day into a great day,” Bradley said. “Man, it was a fun day. And what a way to finish. It was a blast.”

Bradley and Burns were at 12-under 130, and their play in the steamy afternoon on the Copperhead course gave them a little separation starting out the weekend.

Bradley, whose longest par putt was 4 feet in his bogey-free opening round, opened with two quick birdies before coming up short of the green on the 12th hole and making his first bogey. Birdies were hard to come by the rest of the way, but he made up for it with one swing.

With the steep hill, he played the 100-yard shot as if it were 119, and then he added 6 yards to account for a little wind. It was a gap wedge. “A perfect shot,” he said.

“You can’t see the green from down there, so you have to wait for the crowd’s reaction,” he said. “And when everyone puts their arms up, normally that means it goes in. So another bonus of having fans out here. It makes it a lot more exciting for everybody.”

Maybe not for Phil Mickelson. The five-time major champion said he is struggling to keep his focus, or to regain his focus after distractions in the gallery, such as a phone ringing. He bogeyed two of his last three holes for a 69 to miss the cut by one shot.

“My physical ability to refocus, to back away and then refocus and so forth, I’m physically not able to do it right now,” the 50-year-old Mickelson said.

Burns had a few key par saves early in his round, and he took off after making the turn. He holed an 18-foot birdie putt on No. 10, reached the par-5 11th in two for a birdie and then holed a bunker shot on the 12th.

“Birdied the first three on the back and then just kind of we’re off,” he said.

Burns had a one-shot lead after 54 holes in the Houston Open in November and closed with a 72 to tie for seventh. He had a two-shot lead at Riviera going into the last round and shot 69 to finish one shot out of a playoff won by Homa.

“For me it’s just sticking to what I’ve been doing, having a good game plan going into the day,” he said. “I know over the weekend there will be some challenges, and I’m excited for the opportunity.”

Homa still has plenty of confidence from his win two months ago at Riviera, and it shows. He doesn’t feel as though any part of his game is out of order, and his putting has been superb. Homa has made five putts of 25 feet or longer.

And his short track record at Innisbrook — three appearances, three missed cuts, all six rounds over par — is a distant memory that comes with a simple explanation.

Among those at 7-under 135 were Sungjae Im, one of the best iron players on tour at a course renowned for rewarding good ball-strikers, and past Innisbrook winner Charl Schwartzel.

Due to the great finishes of Burns and Bradley, the top two players have their work cut out for them. Dustin Johnson (68) was nine shots back, while Justin Thomas (71) was 10 behind.

Glover had a good stretch of his own, hitting 6-iron from 209 yards to 4 feet on No. 3, the hardest hole of the second round on the Copperhead course. He followed that with a chip 7-iron to a front pin just over the bunker on the par-3 fourth, settling 4 feet away for another birdie.

Glover is trying to build confidence. Unlike Homa, he doesn’t have a recent victory to give him a spark. The last win for the former U.S. Open champion was 10 years ago at Quail Hollow.

Still, there is a rhythm to how he plays and how he walks that is starting to look familiar. Glover doesn’t waste any time stepping over the ball and making contact — usually in the middle of the clubface — nor does he get overly excited on a Friday.

But it’s a step in the right direction. His iron play has been average. His short game has bailed him out. All he wants now is to get his game a little more tidy.

“Two more rounds to go. A lot can happen,” Glover said. “But I’m happy the way I’m playing, happy with the way I’m putting and just want to have a shot.”

DIVOTS: Paul Casey, going for a third straight win at Innisbrook, shot 71 and was nine shots behind. … Jimmy Walker was penalized two shots for being late to the first tee. He made the cut on the number. … The cut was 1-under 141, only the third time at Innisbrook the cut has been under par. 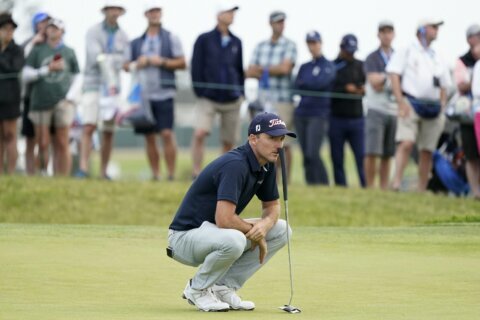 The Latest: Gore makes return to Open and it doesn’t count