Late eagle from the fairway stakes Spieth to lead at Pebble

PEBBLE BEACH, Calif. (AP) — One swing put Jordan Spieth closer than ever to ending a long and mystifying slump, and served as a reminder that he still has a long road ahead at the AT&T Pebble Beach Pro-Am.

Two shots behind with three holes to play Saturday, Spieth holed out with an 8-iron from 160 yards for eagle on the 16th hole, the start of a stunning turnaround that sent him to a 1-under 71 and a two-shot lead going into the final round.

Daniel Berger helped out by going from a share of the lead to two shots behind when his tee shot on the par-5 18th was out-of-bounds by mere inches and led to a double bogey.

“It’s a good lesson to learn for tomorrow, how quickly things can change out here,” Spieth said.

The timing was ideal for Spieth, who has been without a victory worldwide in his last 79 events since he won the 2017 British Open at Royal Birkdale.

He led by two shots at the turn only to miss the green and make bogey at the 10th and 12th, and then bail out of a tough wedge to a back pin on the par-5 14th that spun off the green for another bogey.

The pin on the 16th was cut to the left on a severely pitched green, and it was perfect.

“With the wind in off the right and a little mud on the right side of the ball, I knew I could throw it out to the right and let kind of the wind and the mud do most of the work,” Spieth said. “In the air I thought it was going to be really good. It was one of the only shots I kind of said, ‘Oh, be good’ on today. Certainly a bonus for it to drop.

These moments used to happen when Spieth was winning all the time. This was the second time this week he holed out from the fairway, and now he is on the cusp of winning again.

Spieth was at 13-under 203 with plenty of contenders right behind.

Berger called over an official for a linear measure of his ball on the 18th, against the hedges but inside the white disks that mark out-of-bounds. He still had a 72 and was two shots behind.

“I’m still two shots out of the lead, so I feel pretty good about my chances going into tomorrow and drop a few more putts and it will be a good week,” he said.

Patrick Cantlay, whose third round began with such promise when he hit 8 feet for eagle, birdied the 18th for a 70 and joined Berger two shots out of the lead. Tom Hoge (68) and Russell Knox (69) also were two shots behind.

This is the second straight week Spieth has had at least a share of the lead. A week ago in the Phoenix Open, he couldn’t make any putts and closed with a 72 to finish two shots behind.

Even so, this is considered a body of work — seven straight rounds of good scoring, and this week doing it while mostly keeping the ball in play.

He expects there to be nerves, just like always. He’s equally excited about the process as the position.

“I don’t really care about the time frame stuff,” he said about the 43-month drought. “I’m really just going to throw that out of my head because I’m finally consistently doing things over the last two weeks that I’ve wanted to do for a long time. I think, obviously, the more you continue to do that, the bounces go your way, like the hole-out did today on 16.

“Someone may do that to me tomorrow or come shoot a 64 or something. I mean, it’s golf and it’s Pebble Beach.”

His goal was to set a target and go get it, realizing that his game is still not as complete as when he was winning often and regularly contending in majors.

“It’s working that direction, but it’s not there yet,” he said. “I’m just trying to have it feel a little bit better than yesterday.”

Jason Day was very much in the mix, too, after a 68 left him in the group at 10-under 206. Paul Casey stayed three shots behind with a great break on the 18th when his tee shot tumbled down onto the rocks, but had a flat enough lie he could hit off the rock back into the fairway. He shot 71.

Maverick McNealy had a 69 that included a penalty shot behind the fifth green when his ball moved right as he set the club behind the ball.

Spieth didn’t have to contend with what he predicted to be a “mean” day at Pebble Beach. The rain in the forecast was gone by the time he teed off. The raging wind was more of a stiff breeze along the ocean holes that Pebble gets all the time, though it was no less challenging coming back into it on the back nine.

No rain was in the forecast, just typical Pacific wind on a course where it all can change quickly. 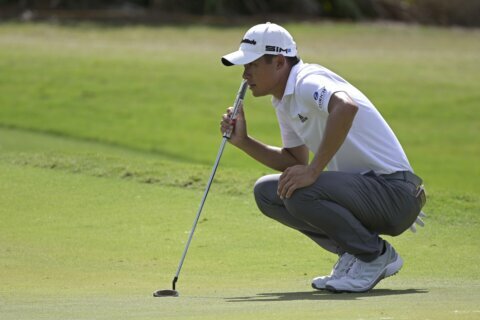 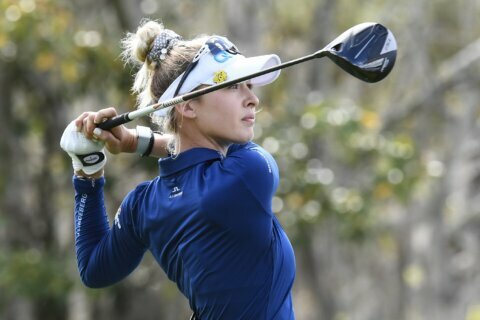 Mickelson in contention in Champions event after mud birdie