THE COLONY, Texas (AP) — Jessica Korda was prepared for another bone-chilling round at Old American Golf Club. Maybe, a bit too prepared.

“My immediate regret when I was on the front nine my kneecaps started to sweat and I didn’t have pants I could take off,” Korda said. “What a beautiful day today was. I know it was really cold this morning, but way less wind than we could have imagined having, so spectacular day.”

At the end of the day Friday, the 27-year-old Floridian had a share of the lead in the Volunteers of America Classic with Anna Nordqvist and 19-year-old Yealimi Noh.

After the temperature never made it out of the 40s on Thursday, it was in the high 50s on Friday in the final tuneup before the U.S. Women’s Open next week at Champions Golf Club in Houston.

“I kept telling my caddie,`Today would have been so nice to go on a hike with your dog, a cup of coffee, say how grateful you are for everything in your life,'” Korda said.

Korda shot her second straight 2-under 69. The five-time LPGA Tour winner played the first 12 holes in 4 under, then dropped a stroke on the par-5 13th and parred the final five.

“It was tough,” Korda said. “Front-nine pins, they were pretty gettable. Back-nine pins, it was just defense all day. It didn’t matter where I put myself. Honestly, I was trying to attack it at different angles. I’m happy with my ball-striking. Honestly, I don’t know what else I could have done.”

Nordqvist closed with a bogey on the par-4 18th for a 68. The 33-year-old Swede made all of her birdies on par-4 holes. She parred the four par-5 holes.

“I feel really good about how I’m hitting it,” Noh said. “Just hit a lot of greens today and made a couple up-and-downs.”

Lindsey Weaver was a stroke behind the leaders after a 68.

Ko had five birdies and three bogeys in a 69. She tied for 34th two weeks ago in her first LPGA Tour event of the year.

“Yesterday was chilly and then a lot of wind, but today was just calm and sunny, so big difference,” Ko said. “I got maybe hybrid some holes, but today 8- or 7-irons, so it was easier.”

The Swede was bundled up for the morning round.

“I really packed on clothes today and I did better,” Sagstrom said. “But now I’m really, really hot.”

First-round leader Charley Hull followed her opening 68 with a 74 to drop into a tie for 14th at even par. She played a six-hole stretch in 5 over, making three bogeys and a double bogey.

Defending champion Cheyenne Knight was 2 over after a 73.

So Yeon Ryu also was 2 over after her second 72 in her first U.S. event on the LPGA Tour since the season-ending CME Group Tour Championship last year.

Jeongeun Lee6, the defending Women’s Open champion, was 4 over after two 73s. 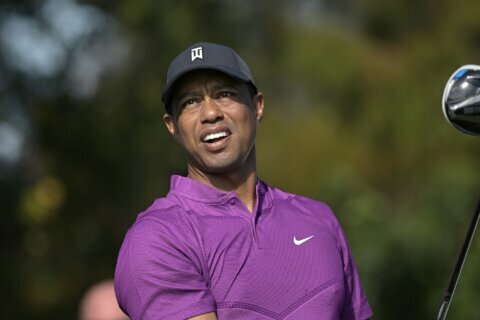