Column: Majors summed up by the young, the bold, the best

AUGUSTA, Ga. (AP) — Lowest score in Masters history. Fewest bogeys for the tournament. First player to reach 20-under par. Dustin Johnson can add one more distinction to his historic week at Augusta National, even if this one won’t show up in the record book.

He only gets to keep the green jacket with him for 141 days.

Reminders of this year like no other because of the COVID-19 pandemic are never far away. Only the current champion is allowed to take his green jacket away from the club until the next Masters, which is five months away.

To that end, Johnson gets another footnote in history as the first major champion to have had the coronavirus. It’s easy to overlook he was in self-isolation in a Las Vegas hotel just three weeks before the first of his 268 strokes at the Masters.

It was good for golf, too.

Despite losing three months in the middle of the season, having the British Open canceled for the first time since World War II and the Ryder Cup postponed until next September in Wisconsin, it still delivered a schedule that will be uninterrupted for 24 weeks until Thanksgiving.

And even with some significant rearranging, three majors provided the perfect snapshot of golf with their winners.

The young. The bold. The best.

Collin Morikawa was 23 when he captured the PGA Championship in his first try with a shot that will rank among the best on the back nine of any major, a driver on the 294-yard 16th hole at Harding Park to 7 feet for an eagle. It was his 28th start as a pro. Jack Nicklaus and Tiger Woods won their first major in their 18th professional event.

Morikawa was the symbol of another youth movement, and this one could turn out to be as strong as the high school class of ’11 group that included Jordan Spieth, Justin Thomas, Xander Schauffele and Daniel Berger.

Also in the mix that Sunday at Harding Park were 21-year-old Matthew Wolff and PGA Tour rookie Scottie Scheffler. As the year nears the end, five players under the age 25 are among the top 30 in the world.

The U.S. Open went to Bryson DeChambeau, and his brain won’t get as much credit as his brawn. He went down another rabbit hole, as he likes to say, and emerged a major champion with a bold strategy that only looked dubious until it worked.

He posted the lowest 72-hole score at Winged Foot and won by six. And in a year when governing bodies seemed more determined than ever to curtail distance, DeChambeau showed there is no solution to athleticism. In his case, it’s a body built to swing faster and hit the ball harder.

“Hitting it farther is definitely an easier way to play the game,” DeChambeau said. “No matter what, athletics are always going to be the top of mind in sport, and no matter what sport you’re in.”

He wisely figured out at Winged Foot that with tight, turning fairways on firm turf, no one was going to hit many fairways even playing with shorter clubs they could control, so why not swing for the fences? It worked at Winged Foot, not so much at the Masters, but only because he didn’t hit his irons or putt as well as he did at Winged Foot. That still matters.

DeChambeau will get another crack at reducing Augusta National to a par 67 next April.

Oddly enough, Johnson averaged 67 a day at the Masters, though when asked at the start of the week what was his idea of realistic par at Augusta, Johnson replied, “The par is 72 when you add up the numbers on the holes.”

Even with two tournaments remaining, the Masters closed the curtain on an extraordinary year, and Johnson is a most extraordinary player. He now has 24 victories on the PGA Tour, at least one in every year except 2014. In his last seven starts, he has three victories, three runner-up finishes and a tie for sixth at the U.S. Open.

Whether it was making only four bogeys all week — back-to-back holes in his second and final rounds — or tying a record by hitting 60 greens in regulation, most impressive about his dominance was the crystal.

The Masters awards crystal highball glasses for anyone making an eagle. Johnson picked up two of those from the par-5 second hole, two putts measuring a combined 8 feet.

He also became the first player to win three crystal vases awarded to the low round each day — a 65 in the first and third rounds, a 68 on the final day. That’s rare in any tournament, much less a major. J.H. Taylor in 1900 at St. Andrews is the only player to have the low score all four rounds.

In a year in which a record five players reached No. 1, Johnson will end the year there. And at this rate, it could be a while before anyone takes it back from him. Odds are he will bring that No. 1 ranking with him to the next Masters, along with his green jacket. 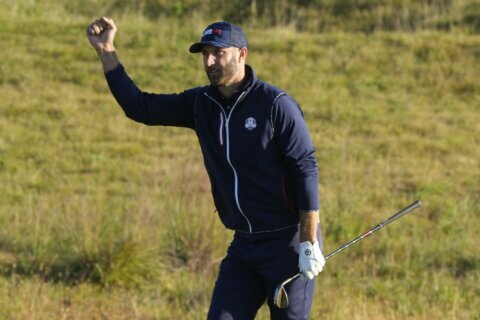 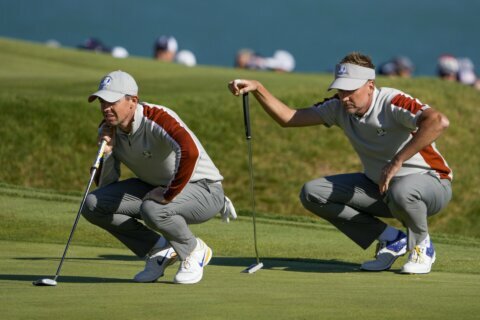 McIlroy sits out then suffers during dismal Ryder Cup 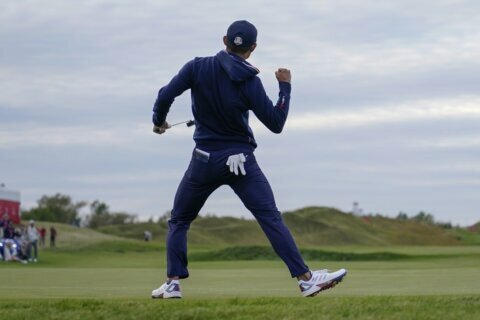