Golfers like to say they win when it’s their week, when a swing adjustment suddenly clicks or because they are…
Listen now to WTOP News WTOP.com | Alexa | Google Home | WTOP App | 103.5 FM

Golfers like to say they win when it’s their week, when a swing adjustment suddenly clicks or because they are driving the ball and putting it just a little better than everyone else. Bryson DeChambeau has a different take: He thinks every week belongs to him.

Over the course of four days, DeChambeau unnerved the folks who run the U.S. Open and carved up Winged Foot’s unyielding reputation one divot-sized slice at a time. By the end, he was the only player to beat par, which also happened to be enough to beat his closest pursuer, Matthew Wolff, by a whopping six shots.

In the bargain, DeChambeau turned one of the golf’s foundational myths — the game is about how many, not how — inside out.

“I don’t really know what to say because that’s just the complete opposite of what you think a U.S. Open champion does” said Rory McIlroy, who counts the 2011 U.S. Open among his four major championship wins. “Look, he’s found a way to do it. Whether that’s good or bad for the game, I don’t know, but it’s just not the way I saw this golf course being played or this tournament being played.”

The big debate in golf at the moment is about the merits of distance vs. accuracy. Most weeks, a younger, fitter generation of players inspired by Tiger Woods tries to drive the ball as far from the tee as possible, figuring a second shot with a wedge — even from the rough — is easier than, say, a 6-iron from the middle of the fairway. It’s called the “bomb and gouge” strategy and DeChambeau has become both its loudest and most successful advocate.

He’s already tinkered with every other facet of the game, from equipment (single-length irons) to how he reads putts (factoring in the rotation of the planet). Last October, with five PGA Tour wins already under his belt, DeChambeau doubled down on the distance side of the argument, announcing he would pack on 40 pounds of muscle in a bid to hit the ball even farther.

“I’m going to come back next year,” he vowed, “and look like a different person.”

Yet even at the start of the week, few people believed he resembled a U.S. Open champion. No tournament in golf places a higher premium on par, or rewards accuracy while punishing wayward shots with rough several times gnarlier than anything encountered at a routine tour event. But when the U.S. Golf Association set up Winged Foot, it’s risk-reward calculations ended yards behind where many of DeChambeau’s tee shots landed.

None of that would matter, however, if he couldn’t putt, or if DeChambeau didn’t have a work ethic that saw him back out on the practice range for several hours after he’d completed his round Saturday, pounding drive after drive into the distance and well beyond the reach of a few scattered spotlights.

Tiger Woods had that same drive though the prime of his career and for a while, he hit the ball farther than just about all his major rivals, too. There’s no way to know how long DeChambeau will have that same advantage or whether he will hold up over the long run.

But either way, the powers-that-be in golf are going to have decide how much distance is too much, and whether to throttle back the ball, sooner than they planned. On Sunday, No. 16 at Winged Foot stretched to 508 yards, a par-5 dogleg converted to a par-4. DeChambeau shredded that defense by cutting the corner with a tee shot that measured 365 yards.

“I don’t know what they can do really, because he’s hitting it so far,” said Louis Oosthuizen, who finished third.

The more immediate concern, though, is how many golf courses on the schedule will be able to contain him.

“If he can do it around here,” McIlroy said. “I’m thinking of Augusta and thinking of the way you play there.”

Late into the U.S. Open broadcast, someone got even more specific, speculating that DeChambeau could blow his tee shot over — instead of having to maneuver around — the stand of trees that guard the corner at Augusta National’s 13th.

That would leave him holding a wedge for his approach shot into the iconic par -5, a prospect that almost certainly caused the green jackets at the Masters to reach for a bottle of antacids with one hand and Google “emergency landscaping services” with the other. 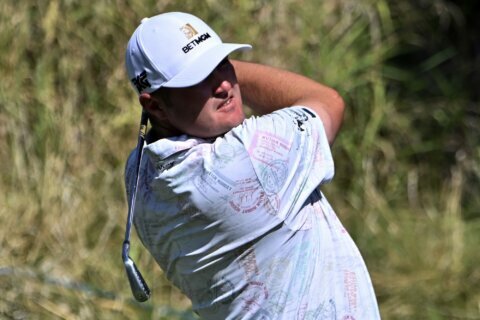