RUTH BADER GINSBURG, 1933-2020: Trump pledges woman for court, pushes Senate to move on pick | How Ginsburg's death could reshape the election | How to honor RBG by supporting her favorite causes
Home » Golf » Woods to host TV…

OLYMPIA FIELDS, Ill. (AP) — Tiger Woods is unveiling his first public golf course design with an exhibition that will be the closest golf gets to a Ryder Cup match this year.

The Payne’s Valley Cup will be played Sept. 22, the Tuesday after the U.S. Open, at Payne’s Valley Golf Course at Big Cedar Lodge in Ridgedale, Missouri.

Woods and Justin Thomas will be the U.S. team that takes on Rory McIlroy and Justin Rose of Europe. The 18-hole match will be televised live on Golf Channel with players wearing mics. It will feature elements of the Ryder Cup, with a mix of foursomes, fourballs and singles.

Mostly, though, it’s a chance to show off the first public course of TGR Design. The other courses from his design group have been either private or resort courses. This one is a tribute to Payne Stewart, the three-time major champion who died in a plane crash in 1999, a month after the U.S. won the Ryder Cup at Brookline.

Stewart was a native of the Ozarks. The event will raise money for the Payne Stewart Family Foundation.

“Payne’s Valley is the first public golf course that I have designed. I couldn’t be prouder of how it turned out,” Woods said.

It will be the second made-for-TV exhibition Woods plays this year. He teamed with Peyton Manning to compete against Phil Mickelson and Tom Brady in May to raise money for COVID-19 relief efforts and to showcase golf as it prepared to return from the three-month shutdown brought on by the pandemic.

This one features four players who all have been No. 1 in the world and won major championships, most of that belonging to Woods. He has 15 majors and was No. 1 for a record 683 weeks.

The event will be closed to the public, except for a select group hosted by Big Cedar Lodge.

The Payne’s Valley Golf Course was the idea of Johnny Morris, a conservationist who founded Bass Pro Shops and Big Cedar Lodge, where the PGA Tour Champions has played the last two weeks.

“Tiger and I have a 20-year friendship that started through fishing and has evolved into a great partnership. We look forward to showcasing this destination to the world through the Payne’s Valley Cup,” Morris said.

One unique element of the course is a par-3 19th hole designed by Morris. Players then cross a nature trail through a cave system to return to the clubhouse. 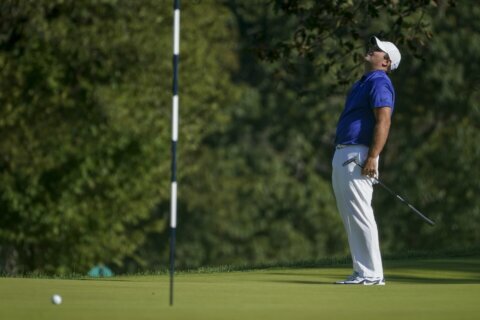