RUTH BADER GINSBURG, 1933-2020: Trump pledges woman for court, pushes Senate to move on pick | How Ginsburg's death could reshape the election | How to honor RBG by supporting her favorite causes
Home » Golf » Quiet please: A PGA…

Quiet please: A PGA with no fans and the new normal for golf

To those overserved boors who insist on screaming “Mashed Potatoes!” every time Dustin Johnson or Brooks Koepka unloads with their driver, we have one simple request for you.

For this week at the PGA championship, the same goes for every lunkhead who snapped a photo in the middle of a backswing, every 50-year-old who crowded out a kid in an autograph line, every scampering porta-potty seeker who incurred the wrath of an over-officious caddie.

When golf returned eight weeks ago from its coronavirus-inflicted hiatus, we were grateful. Grateful simply to have something new, and live, to watch. Someone to cheer for. Or against. Only problem: There was hardly any cheering. And, as Rory McIlroy put it about midway through a largely silent, largely joyless, very sanitized restart to the 2020 season: “Every tournament has felt the same.“

Now the stakes are higher. It’s the PGA. The year’s first major under the pandemic-shuffled schedule. Players are making their way around the grounds of Harding Park in San Francisco in virtual silence. And, true to McIlroy’s word, except for the marine layer, a few more stocking caps, that neck gaiter Tiger Woods is wearing and the live shots of players getting ready for their rounds in the parking lot, this one looks the same as they all have this year: empty, silent, sterile.

“You miss the positivity, the energy,” said Martin Kaymer, whose round of 4-under 66 put him within one of the lead after the morning action Thursday. “But you have to create it somehow yourself.”

The day began with the usual pomp of the opening-tee introductions. “Now on the tee, please welcome, from Dallas, Texas, Scottie Scheffler.” The starter used a microphone. Why?

Some things never change. Woods still draws the biggest crowds. But it was only reporters and cameramen following him around the course, this time. And Koepka, in search of his third straight PGA title, still plays under the radar. Of course, this week, he’s not the only one not being seen.

“That’s the way it’s going to be for the foreseeable future, unfortunately,” McIlroy said.

The PGA trimmed its roster of volunteers from around 3,500 to fewer than 300 for a tournament that was supposed to take place in May but is now taking place in August. There is no need for crowd control, for shuttle buses, for people taking your credit card at the merchandise tent, which has been converted into what might just be the largest player’s locker room in golf history.

“I’ve played in tournaments where there’s nobody around so it’s kind of normal for me,” said Jeff Hart, one of the 20 club pros in the field this week. “But it was odd, and it was just — you didn’t even feel like you were at a major championship.”

About halfway through the day, journeyman Bud Cauley made a snaking, 70-foot putt for a birdie that pulled him within one shot of the lead. It was so quiet out there, you could hear the ball hit the bottom of the cup. Adam Hadwin started his afternoon by jarring the ball off the stick and into the hole on No. 1 for an eagle. He received warm applause from the 20-or-so volunteers, staff and scorers surrounding the green.

But if you’re inside the gates, you are among the lucky few who have undergone and passed COVID tests and been deemed essential to make this tournament run.

“We’re going to celebrate what we’ve got,” PGA of America CEO Seth Waugh said about the week’s eerily silent arrangement.

Not all fans were taking ‘no’ for an answer.

Jason Day, whose 65 gave him the lead after the morning rounds were complete, spotted fans peering through a hole cut through a blue tarp that walled off the 12th tee box from the outside. That’s as close as they’ll get this week.

“I actually miss playing in front of fans because you obviously work off that, especially in a major championship.,” Day said.

This week, though, instead of fans surrounding the tee boxes, there are a hand-sanitizer dispensers. And instead of roars echoing through the cypress trees, it’s the quiet congratulations of a fellow playing partner: “Nice shot. Great putt. Good one.”

But no “You Da Man.” No “Baba Booey!”. No “Get in the hole!” for a putt that has barely started rolling off a player’s putter.

Is that good? Or bad?

“It’s just different,” Woods said. “That’s probably the only way to say it. This is what we’re going to have to get used to in the near future, and for probably for a while.” 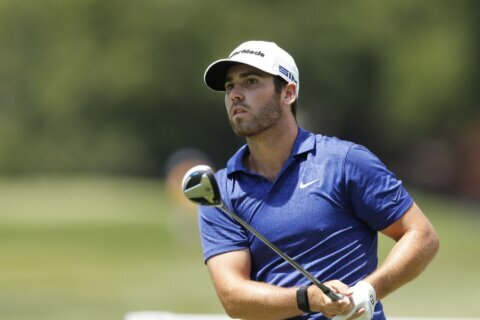