SPRINGFIELD, Mo. (AP) — Phil Mickelson would much rather have been playing in the final round of The Northern Trust…
Listen now to WTOP News WTOP.com | Alexa | Google Home | WTOP App | 103.5 FM

SPRINGFIELD, Mo. (AP) — Phil Mickelson would much rather have been playing in the final round of The Northern Trust on Sunday, not only because he believes his game is rounding into shape but because it might mean he was still alive in the PGA Tour playoffs.

Plus, he would be able to continue a nice ramp-up toward the U.S. Open at Winged Foot.

Fortunately for Mickelson, though, he celebrated his 50th birthday in June. Such a milestone might bring a shudder to many folks, but it actually worked out quite nicely for him. It grants him access to the PGA Tour Champions, and that means he can keep fine-tuning his game when he makes his debut on the 50-and-over circuit at Ozarks National on Monday.

“I didn’t really want two weeks off. I’ve been working hard on my game. I want to get out and play,” Mickelson said, “so this worked out really well. It’s such a beautiful place. I’m a big fan of Bill Coore (and) Ben Crenshaw golf course designs, and we are here playing one of the best. And it’s a beautiful area, so I’m excited to compete.”

Mickelson was just inside the playoff cut line heading into The Northern Trust, but an opening 74 took him out of contention for playing the weekend. It also took him out of the BMW Championship next week and shot down any hopes of making the season-ending Tour Championship, leaving only the Safeway Open before heading to the year’s second major championship.

So, rather than sulk about it, Mickelson hopped a plane to the Ozark Mountains of southwest Missouri, where he found himself among plenty of familiar faces for the Charles Schwab Series.

Fellow tour rookies Ernie Els and Jim Furyk, both of whom already have won this season, are in the field at the picturesque course at Big Cedar Lodge. So is former Masters winner Mike Weir and former Players champion K.J. Choi, and his pairing includes good friends and longtime rivals Steve Stricker and Retief Goosen.

“I haven’t seen them in a long time,” Mickelson said. “Grew up playing with them for a number of years, and it’s exciting for me to come out here and see so many people I know. On the regular tour, I don’t know a lot of the guys now.”

Mickelson has had a roller-coaster season so far, finishing second at the WGC-FedEx St. Jude Invitational and third at the AT&T Pebble Beach Pro-Am back in March. He also made the cut at the recent PGA Championship at Harding Park in San Francisco, though he faded well off the pace over the weekend. But he also has missed six cuts, including this week at The Northern Trust, leaving him with both optimism in his game but clearly defined areas that need work.

“I love playing and competing, and heading into the U.S. Open, I’ll play the week before in Napa, but I didn’t want to have two weeks off when I’ve been working hard on my game,” he said. “I was really wanting to play and compete in the playoffs, so it was a disappointing first round and it’s fun for me to have a chance to come play.”

Fun for tournament organizers, too. There is a sudden buzz that was lacking just days ago, when the PGA Tour Champions played at neighboring Buffalo Ridge Golf Course in an event won by Shane Bertsch in a four-man playoff.

“Phil’s had an amazing career and still plays at a very high level. It’s great to have him out here,” two-time Masters champion Bernhard Langer said. “I’m sure any tournament or any sponsor will be happy to see Phil. It’s great the guys who have come out lately with Ernie Els, Retief Goosen, Mike Weir and on and on.”

Mickelson would love to win this week. He never goes into a tournament expecting anything less. But he also wants to make sure his game is in shape for Winged Foot, where he will try again to complete the career grand slam. He’s been the runner-up a maddening six times, including the 2006 event on the same course just north of New York City.

“Well, it will be fun and exciting to compete at Winged Foot,” Mickelson said. “It’s been 14 years since I’ve been back there, so I’m looking forward to getting back and playing a golf course that I was so close to accomplishing a dream.” 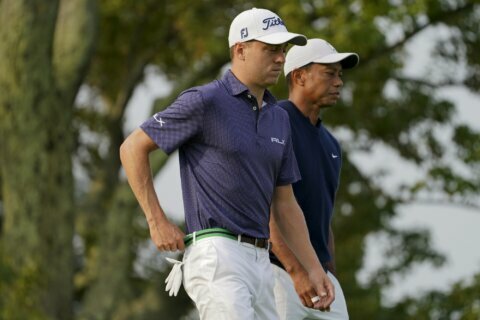 US Open sees red in Round 1. Will Winged Foot strike back? 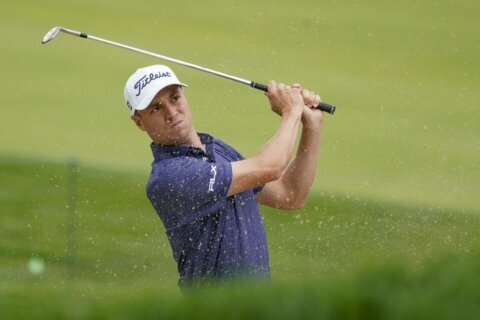 A brief look at Thursday’s opening round of the U.S. Open