NASSAU, Bahamas (AP) — As a player, Tiger Woods wasn’t all that happy with his game Wednesday in the Hero…

NASSAU, Bahamas (AP) — As a player, Tiger Woods wasn’t all that happy with his game Wednesday in the Hero World Challenge. As the Presidents Cup captain, he had reason to be pleased.

U.S. Open champion Gary Woodland and Patrick Reed, who will be part of the U.S. team next week at Royal Melbourne, each managed a tough wind in the Bahamas to post a 6-under 66 and share the lead after the opening round of a tournament that felt more like a Presidents Cup tune-up.

Woods used two of his four captain’s picks on Woodland and Reed.

He used another on himself, and showed plenty of rust in his first tournament since Woods won the Zozo Championship in Japan the last week of October.

Woods made sloppy bogeys on both par 5s on the front nine. He hit his stride on the back nine with a five-hole stretch he played in 5-under par, chipping in for eagle on the par-5 15th. That put him within three of the lead right up until he chopped his way to a bogey-double bogey finish for a 72.

“It was not a very good start,” Woods said. “Didn’t play the par 5s well early and then got it going on the back nine a little bit. Got myself right there in the mix and then bad shots on 17, 18.”

Woods has 11 of his 12 players for the Presidents Cup at his holiday exhibition, and it was clear what kind of pairings he had in mind for the matches that start Dec. 12 at Royal Melbourne.

He played with Justin Thomas, who had a 69. Reed played with Patrick Cantlay, his partner in the team event in New Orleans each of the last three years. Woodland played with Xander Schauffele, while Bryson DeChambeau was paired with Webb Simpson and Rickie Fowler played with Tony Finau.

Matt Kuchar had a successful partnership with Dustin Johnson in two Ryder Cups. Johnson is not in the Bahamas, withdrawing last week to give his left knee one more week to get ready for the matches. Kuchar instead played with Chez Reavie, who replaced Johnson in the Bahamas.

Woods didn’t reveal any insight into his plans for next week, only that he wants open communication.

“Got to have all those different contingencies ready to go.”

Only 10 players from the 18-man field of players from the top 50 managed to break par on a course that typically allows for good scoring. The wind was strong and from the opposite direction, so strong that Woodland hit 5-iron into the par-4 18th, which typically is a short iron.

He even considered the wind while putting.

“Sometimes it’s better to miss the green than be in the middle of the green putting downwind,” Woodland said. “We tried to play into the wind all day today, and we did that. We controlled the golf ball enough where we did that and gave ourselves a lot of chances.”

Reed did his damage on the back nine, running off four straight birdies through the 16th. Players experienced this wind during the pro-am, and Reed was stunned to hit wedge into the typically tough par-4 16th.

“Today I hit a soft lob wedge,” he said. “The ball is just going forever downwind, and into the wind the ball is going nowhere. You have to be patient and make putts whenever you have opportunity.”

Cantlay didn’t fare so well at the end with a bogey on the par-3 17th and closing with a quadruple bogey. He was stoic after signing his card. He’s like that on the golf course. That’s what Reed finds appealing.

“I get emotional out there,” Reed said. “And he barely has a heartbeat.” 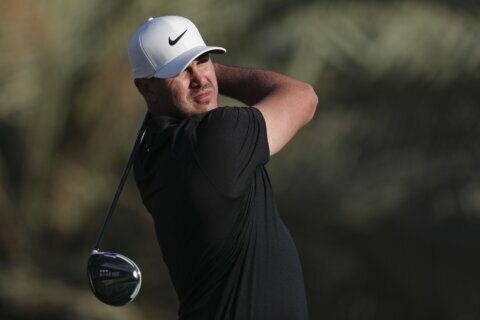 Ramirez handles wind and takes lead in Latin American Am