Gardening: For easy, effective weeding, go back to the hoe

I’ll bet that in some corner of your toolshed or garage, an old hoe is leaning against a wall. A…
Listen now to WTOP News WTOP.com | Alexa | Google Home | WTOP App | 103.5 FM

I’ll bet that in some corner of your toolshed or garage, an old hoe is leaning against a wall. A hoe that hasn’t seen use in a long, long time, having been replaced by, perhaps, a gasoline- or electric-powered tiller, chemical weed killers, or mulches.

Hoeing is not much in vogue these days, perhaps because it seems to require what Charles Dudley Warner, in his 19th century classic “My Summer in the Garden,” said every gardener should have: “an iron back with a hinge in it.”

But hoeing is, believe it or not, an easy, safe way to control weeds. Maybe even easier than many of the “labor-saving” methods that have supplanted it.

The reason for hoes, rototillers, weed killers, and mulches are two-fold: first, to keep weeds in check, and second, to keep the soil surface loose so rain can percolate in rather than skitter away across the surface.

Powered cultivators chop up weeds and loosen the soil, but in so doing burn up organic matter, ruin soil structure, disrupt earthworms and beneficial fungi, and damage roots.

Hoeing can have the same effects as power tilling, but it would take more energy than most gardeners have to match the damage. Used correctly, a hoe causes little damage.

Hoeing is simple, entailing nothing more than grabbing the hoe’s handle. Compared that to the time and effort expended to apply weed killer (mix it up, don protective clothing, spray, then clean the sprayer), start a stubborn tiller’s engine or haul mulch.

(Nothing against mulching, though; a thick layer of some straw or compost blanketing the soil brings many benefits. You just can’t hoe AND mulch to control weeds; it’s one or the other, unless the mulch is a fine material such as sawdust or well-rotted compost.)

You might have an aversion to hoeing because you’ve used the wrong type of hoe or have allowed weeds to grow too big between hoeings. Never wait until you see large weeds before you grab your hoe. Instead, hoe the soil every week or two, and as soon after every rain as the soil crust begins to dry. This way, weed seedlings are killed before they get a firm footing.

If weeds are rampant, the only type of hoe that will kill them is a standard, large-bladed garden hoe, used with a not-very-pleasant chopping motion. This hoe is useful for hilling potatoes or mixing concrete.

For working soils that are loose and weed-free, the best hoes are those with blades running parallel to the surface, like the various types of scuffle (or “Dutch”) hoes, the Hula hoe, the colinear hoe and the Swan-neck hoe. These hoes don’t cause excessive root damage because, used correctly, they skim along, loosening the soil from just a quarter inch or so beneath the surface.

My flower garden is in various-shaped mulched beds, but the vegetable beds are in long, straight rows where the soil is mulched with well-rotted compost. I hoe these beds with my favorite hoes, either a “winged weeder” or a “wire weeder.” The winged weeder has a V-head shaped blade that resembles an airplane wing. The wings are sharpened front and back, and lie parallel to the ground as I hold the hoe’s handle. The wire weeder has a cleverly bent thin but strong wire, useful for hoeing close in among small plants.

I use either hoe walking backwards, moving my arms with the same smooth motion that I use when sponge-mopping the kitchen floor. Walking backwards is important to keep from stepping on hoed ground, where each footprint would be a firmed seedbed for weed seeds.

The cut earth flows over the blade, then drops back in place with each push and pull of the handle. It takes but a few pleasant minutes about once a week to keep the soil weed-free and the surface loose. And no need for that iron back with a hinge in it! 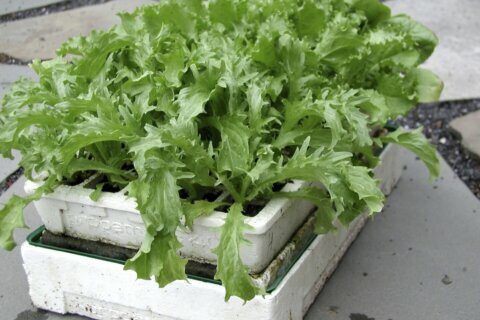 Start now to get another growing season out of your garden 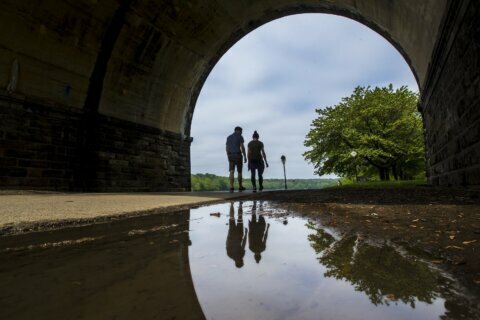 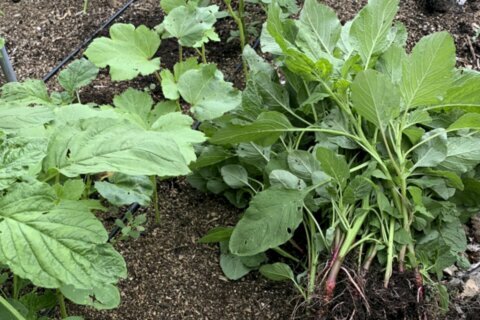 Weeds aren’t all bad, but do need to be controlled