Food trucks have long been seen as an urban treasure but are now being saved by the suburbs during the coronavirus pandemic. No longer able to depend on bustling city centers, these small businesses on wheels are venturing out to where people are working and spending most of their time — home.
Listen now to WTOP News WTOP.com | Alexa | Google Home | WTOP App | 103.5 FM
(1/14) 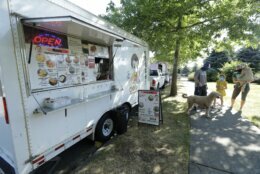 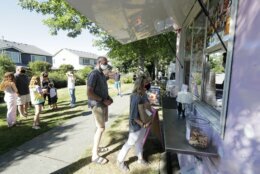 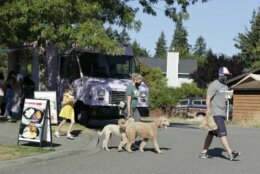 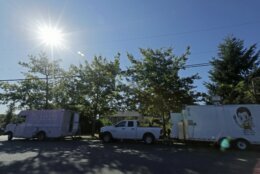 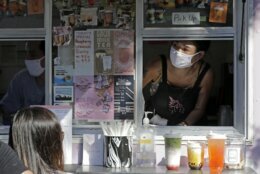 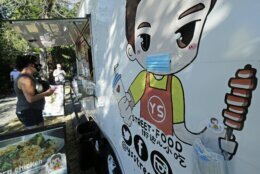 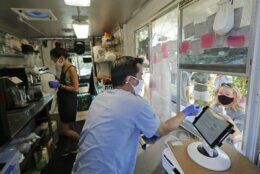 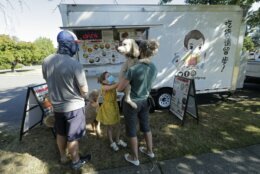 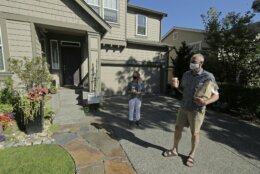 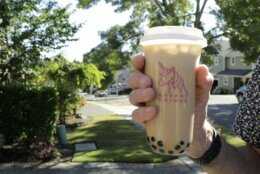 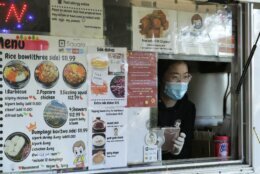 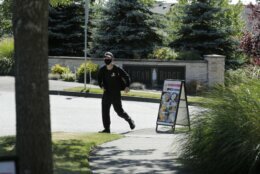 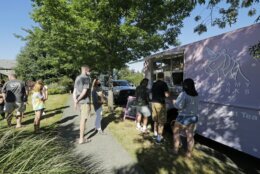 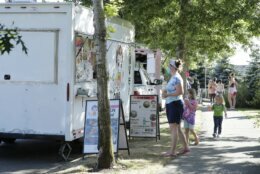 LYNNWOOD, Wash. (AP) — On a warm summer night, two food trucks pulled onto a tree-lined street in a hilltop neighborhood outside Seattle. The smell of grilled meat filled the air, and neighbors slurped on boba tea drinks. Toddlers, teens, their parents and dogs sat in the grass, chatting behind masks, laughing and mimicking imaginary hugs to stay socially distant while they waited for their food orders.

Long seen as an urban treasure, food trucks are now being saved by the suburbs during the coronavirus pandemic. No longer able to depend on bustling city centers, these small businesses on wheels are venturing out to where people are working and spending most of their time — home.

As food trucks hunt for customers that used to flock to them, they’re finding a captive audience thrilled to skip cooking dinner, sample new kinds of cuisines and mingle with neighbors on what feels like a night out while safely staying close to home.

“This is festival season, fun season. All the stuff we typically do as humans, we can’t do anymore,” said Matt Geller, president of the National Food Truck Association. “Walking out to a food truck is a taste of normalcy, and it feels really good.”

YS Street Food Group owner Yuli Shen discovered the hilltop Seattle-area neighborhood through Facebook, and she and a friend who runs the Dreamy Drinks boba tea truck went out together recently and served customers for three hours.

It’s a change and a relief for Shen. Before the pandemic, she raked in money by parking at Amazon’s campus near downtown Seattle, where hordes of office workers would line up for lunchtime Chinese rice bowls. By July, she was frantically searching for somewhere to go.

“It’s very hard to find a location to park, and so we have to find a different place and different people. It’s harder to run the business, but we’re trying,” Shen said.

Weekday lunchtime business is the bulk of the revenue for an average food truck, which may make $800 to $1,200 a day, Geller said. And lucrative appearances at major summer festivals and community events padded them for leaner winter months.

Since stay-at-home orders earlier this year emptied out city centers and canceled gatherings, many food trucks — like brick-and-mortar restaurants — have gone out of business or aren’t sure when they’ll open again.

Food trucks adjusted their business model as they headed to the suburbs: They focus on dinner, adding kid-friendly options and preparing for larger orders. A new neighborhood means being unsure how many customers they’ll get and gambling on how much food to bring. To avoid that, many trucks urge customers to order ahead online.

Geller said the suburban shift has been a boon for food trucks in places like Seattle, Nashville, Tennessee, and Austin, Texas. He said people in the suburbs have been good at staying connected with neighbors during COVID-19 through Facebook groups, where food truck gatherings are advertised.

B.J. Lofback decided to pivot his Nashville-area food truck and restaurant away from labor-intensive Korean food after laying off most of his staff when business dwindled. He rebranded as Pinchy’s Lobster Co. and now sells lobster rolls, which he can largely prep himself.

Without his usual downtown Nashville lunchtimes and music events, he and other truckers began reaching out to homeowners associations in large subdivisions. It’s been such a success, he doesn’t miss the “stressful, expensive” event schedule. Now, he can keep all the money he earns, instead of paying up to 20% of his revenue in event fees.

“The economics just worked,” Lofback said. “Me personally, I’m hoping that even if a vaccine dropped tomorrow and herd immunity was accomplished tomorrow, I hope neighborhoods still have us out.”

The bakery pivoted to online sales, home deliveries and food truck events. Some events featuring its famous hand pies have been as successful as a modest day in a store. The 28-year-old business is considering adding a second food truck.

“It’s enough to pay our employees and cover the cost of it and make a little bit of revenue for us to keep going,” Amaya said.

The idea was also new to Julie Schwab before she created events that have practically become food truck lore near Lynnwood, Washington, about 16 miles (25 kilometers) north of Seattle.

Business owners ask if it’s true that one truck made $4,000 in one night. She tells them food trucks make between $1,000 to $4,000 a shift. The high school psychologist also advises other communities that want in on the food truck circuit.

“You look what’s happening with everybody coming out, and people are getting to know each other,” Schwab said, adding that people wear masks and keep their distance. “It’s been really great to build a community despite what’s going on with this pandemic.”

After hearing how the industry had dried up, Schwab took a stab at organizing an event in June for the only food truck she’d ever tried. Now, she’s scheduling trucks seven days a week and into December.

Thanks to the trucks, Schwab discovered bibimbap, a Korean rice bowl, and she relishes helping small businesses, many run by people of color.

But there’s been headaches, too: hours of work scheduling trucks, promoting events and responding to neighbors with questions. Occasionally, trucks are late, unprepared or no-shows.

Christine Thai, a hospital program coordinator, was surprised to learn about the food truck scene in her community when she went to one of Schwab’s events recently with her husband and baby. It was a rare outing for the family, and she got to enjoy a strawberry matcha latte.

“The suburbs are getting cool because people don’t want to travel anymore,” Thai said.

Where to find National Coffee Day freebies, deals and discounts