Popeyes' beloved chicken sandwich helped give the chain a major boost in the fourth quarter. The company's stock jumped about 4% before the market opened Monday.

Popeyes’ beloved chicken sandwich helped give the chain a major boost in the fourth quarter.

Restaurant Brands International, which owns Popeyes, Burger King and Tim Hortons, reported Monday that sales at all Popeyes restaurants jumped about 42% to $1.3 billion in the last three months of 2019 compared to the same period a year before. At Popeyes restaurants open at least 17 months, sales jumped 34%.

The company’s stock jumped about 4% before the market opened Monday.

The biggest sales driver was Popeyes’ new chicken sandwich, which caused a splash when it launched this summer.

Popeyes first introduced the menu item in August. Customers flocked to the restaurant chain and the sandwich sold out in less than two weeks. The brand said at the time that the “extraordinary demand” took it by surprise.

The sandwich -— a buttermilk battered and breaded white meat filet, topped with pickles and a choice of mayo or a spicy Cajun spread and served on a toasted brioche bun — was billed as Popeyes’ “biggest product launch in the last 30 years.”

After taking great pains to prevent another shortage, the chain brought the menu item back in November. The fourth quarter figures show that this summer’s uproar over chicken sandwiches continued into fall.

The sandwich “has proven to be a game changer for the brand in every way,” said Restaurant Brands International CEO Jose Cil in a statement discussing the financial results. Cil called 2019 a “pivotal year,” for Popeyes during an analyst call discussing earnings.

The sandwich helped draw customers into restaurants, where they ended up buying other food as well.

“For the vast majority of our guests purchasing the sandwich, we saw that they actually spent more on other products,” said Cil. “The traffic driven by the demand of the Popeyes Chicken Sandwich helped drive growth in our entire menu.”

Because 2019 was such a good year for the brand, more US franchise operators have expressed interest in opening new restaurants, Cil noted.

Wendy’s sparred with Popeyes on Twitter to promote its own version of the sandwich. And McDonald’s started testing fried chicken sandwiches in select markets December. It also added chicken breakfast sandwiches to its national menu for a limited time.

Across the Burger King chain, sales jumped roughly 8% to $5.9 billion in the fourth quarter compared to the same period a year before. At Burger King restaurants open at least 13 months, the increase was nearly 3%.

The Impossible Whopper was “an important sales driver,” said Cil, adding that Burger King plans to expand its plant-based offerings because of the success of the product.

Tim Hortons, however, is struggling. Its sales dipped about 3% in the quarter. Sales at Tim Hortons cafes open at least 13 months fell about 4% in the fourth quarter. 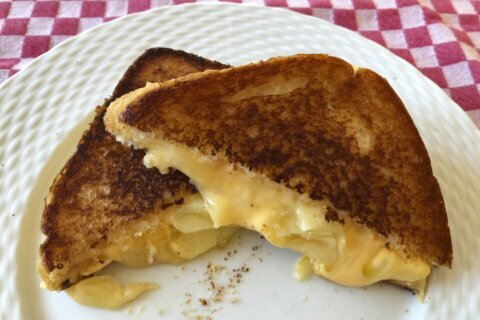 For the ultimate grilled cheese, use both stovetop and oven