Prabal Gurung’s fashion show asks: Who gets to be a woman?

Prabal Gurung celebrated all things woman Wednesday night on the runway and off at his New York Fashion Week show along the downtown waterfront. He summed up his inspiration thusly with a quote borrowed from the Pulitzer Prize-winning fashion and culture critic Robin Givhan:

“To be girlish is to be powerful, because power is redefined.”

Whether Gurung achieved that goal in his spring-summer mix of sporty dresses, loose trouser looks and elegant evening wear is up to interpretation, but he’s been thinking a lot about the fundamental questions in today’s culture wars over inclusivity, diversity, justice, femininity, beauty and ownership of women’s bodies.

“Who gets to be all of it or none of it? Who gets to be a girl. In today’s world, the maternal matriarchal energy is much more needed than ever,” he told The Associated Press from Robert F. Wagner Jr. Park on New York Harbor, with Lady Liberty as his backdrop.

America, he said, “has always been a woman but hasn’t always been treated beautifully.” New York is also a woman, Gurung said, as is new Gov. Kathy Hochul, who took the job last month after Andrew Cuomo’s sexual harassment scandal and sat in the designer’s audience with Amelia Hamlin, Huma Abedin and Maye Musk, the model mother of Elon.

“I’m a storyteller, you know, and I tell different kinds of stories. And as a storyteller, I’m a healer. Through stories you can connect people. You see people. And that’s what fashion is. Fashion allows people to be seen, stories to be told and the joy and the optimism that comes with it,” he said.

This particular story follows Gurung’s 10th anniversary show two years ago in which he put models in beauty pageant sashes that read, “Who gets to be American?” He used highlighter yellow tulle, bubble dresses and electric green trucker jackets to tell his tale this time around.

Gurung showed dressmaker button detailing alongside feathery and slinky looks. There were tea dresses and undyed denim trousers and wrap mini dresses. And he did it in collaboration with Mattel’s American Girl, one of his show sponsors.

The doll brand is launching a limited edition T-shirt for both girls and their dolls emblazoned in multicolored letters with: “Stronger in Colour.” Some of his guests held custom American Girl dolls in celebration of “all the limitless possibilities,” according to a statement sent to media ahead of the show.

Had Gurung known what an American Girl doll was prior to the pairing?

“No, I didn’t, to be completely honest,” he acknowledged.

No matter. Gurung is a proven fierce advocate and ally — for people of color, for immigrants, for non-binary people, for women. He concluded: “I wanted to create a world where people tonight would feel that different kinds of beauty exist somewhere.” 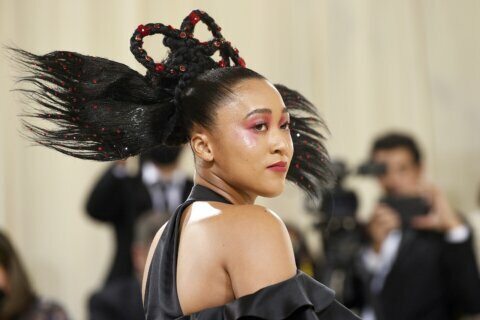