NEW YORK (AP) — Glam was back for the Golden Globes virtual, bicoastal awards night Sunday as nominees Zoomed in from around the world and, for Leslie Odom Jr., from his front porch in Los Angeles not far from the action in Beverly Hills.

And they were ready, style wise, as the Globes split hosts, with Amy Poehler at the Beverly Hilton and Tina Fey at the Rainbow Room in New York.

There was nary a pair of sweats in sight. Jason Sudeikis was a glam outlier in a rainbow tie-dye hoodie from his sister’s clothing line as he picked up an award remotely, saying : “Wow, do I talk now?”

The sweatshirt, which retails for $110, whipped up buzz on social media, prompting Fey to joke after Sudeikis accepted his award: “If anybody wants to know where they can get Jason Sudeikis’ hoodie, go to nbc.com/globesfashion.” The page, please note, doesn’t exist.

Backstage after the show, Sudeikis told reporters he owns a multitude of hoodies but chose the one emblazoned with “Forward” on the front and “Listen + Lead” on the back as fitting for the unusual night.

“When people you care about do cool interesting things you should support them,” he said.

Jodie Foster won wearing a black-and-white silk pajama set from Prada, her dog Ziggy in a bandana to match and her wife by her side.

During a Zoom session with reporters after the show, a giddy Foster stuck out a bare foot showing she went shoeless to collect her award and said: “This is the best Globes ever! To be able to be home just felt really real. It didn’t feel like it was filled with so much artifice.”

Regina King’s dog snoozed in the background before the show as she showed off her Louis Vuitton gown in silver and black — and Amanda Seyfried previewed a springy, coral Oscar de la Renta with floral adornment, echoing many stars who said they wanted to bring a little joy.

“I’ve got my son, who is 5 months old, laying against a pillow in a tux,” Seyfried said.

Laverne Cox, in a red, embellished cape-sleeve gown, did something even more unusual: She stood up to chat with reporters on E! and NBC via Zoom before the show.

“I wanted to feel festive and go for it,” she told NBC. “It’s really amazing about this whole Zoom world. People can do whatever they want.”

That meant Chanel for Shira Haas in Los Angeles, and custom Gucci for Elle Fanning in London.

“It’s nice to have something to celebrate and get dressed up for, and actually put on a dress to walk from my living room to my kitchen,” Fanning told E!. “I thought, why not?”

The jewels flowed along with the gowns, which included a stunning, bright green sparkler for Anya Taylor-Joy by Dior Couture with a matching coat.

Fey and Poehler, both dressed in black to open the show, joked about the unusual set up and the distance between them, with Fey pretending to stroke Poehler’s hair through their screens. The two, with numerous fashion changes, were joined by an array of presenters as winners accepted via Zoom, with an early glitch when winner Daniel Kaluuya’s audio went silent at first, then perked up so he could speak.

Peter Morgan, creator of “The Crown,” was a winner from his “tragic little office,” calling the pre-pandemic Globes “always the most fun awards show.”

Nominees bantered from screen to screen, shouting out their hellos to each other.

On stage and for their small, in-person — and masked — audiences, production designer Brian Stonestreet pivoted like never before when the Globes decided to go bicoastal earlier in February, just days before show time.

The awards veteran, who has designed for the Grammys, the Billboards, the Academy of Country Music and others, told The Associated Press ahead of the Globes’ big night that he gained massive horizontal real estate for the screen-centric show with the shrinking of tables in size and number.

“Funnily enough, it gave me a little more freedom in terms of scenery,” he said of the Beverly Hilton, while incorporating the Rainbow Room’s massive center chandelier adorned with stars and orbs in New York.

He used the extra space (about 36 guests in New York and 42 in Beverly Hills) to expand screen presence and curvier, more dramatic, staircases. On the floor, he placed trophies on pedestals among his two- and three-person cocktail tables, rather than the usual 6-foot round tables seating 10 to 12 people for a total of more than 1,000.

Instead of star-studded crowds crammed into the Hilton’s ballroom, the Globes hosted frontline and essential workers, along with food bank workers from the show’s philanthropic partnership with Feeding America.

Lydia Marks, a New York set decorator, told The Associated Press the evening’s technical challenges were many. With so many remote locations and two live sets, the few glitches should be forgiven, she said.

“While it looks easy, the direction needs to remain responsive in a way that is more like a live sporting event than an awards show,” Marks said. “I think it looks pretty seamless and controlled for the amount of feeds they are working with.” 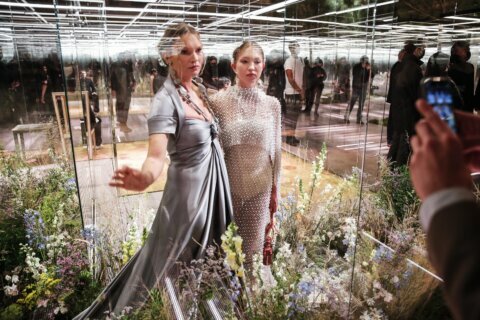 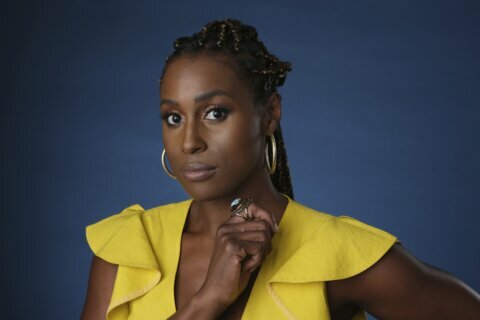 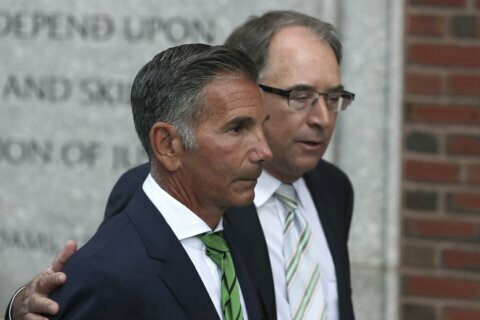