PARIS (AP) — Chloe took over the esplanade of the Palais de Tokyo on Thursday for an immersive runway show that used huge plasma screens to broadcast the collection live as models wove in between guests. Like Milan before it, Paris is undertaking an unusual fashion season for spring-summer 2021. For its nine-day duration, the calendar is flitting between some 16 in-person, ready-to-wear runway collections, with masked guests, celebrities and editors in seated rows, around 20 in-person presentations, and several dozen completely digital shows streamed online with promotional videos.

Some guests clutched designer umbrellas in the light drizzle, but the sun came out for Chloe as the collection began. It could have been a metaphor for the bright and breezy show from hip designer Natacha Ramsay-Levi that was delivered in a soft summer palette.

There was an ethnic, quasi-Balkan vibe to some of the soft geometric shapes in square shirt pockets. Also Cleopatra-style eyeliner and flashes of gold jewelry. But there was one substantial draw-back. Although the display was intended to be immersive, it fell victim to its own ambition: The high-tech plasma screen images made the design details difficult to see, and many guests were seated so that they could only see the sometimes distant backs of models.

It was a softer, more feminine, direction for Turkish-French designer Ece Ege at Dice Hayek, who has in recent seasons fused masculine tailoring with a muted palette. On Thursday, the collection was a celebration of vibrant color, shape, and general girliness — that at times echoed styles preferred by designers such as Giambattista Valli.

A multitude of oversize bows adorned some of the 27 looks, and skirts were sometimes fashioned with large, crisp pleats. The aesthetic for spring-summer harked back the high-waisted, almost-Empire Line styles of yesteryear in bright pinks, cadmium reds, and emerald greens.

Juliette sleeves — one of this season’s trends — was also a big theme.

French designer Alexis Mabille turned up the classical dial this season for a more sophisticated aesthetic than usual — both in the sumptuous silks and in the silhouettes.

A royal red satin coat-dress evoked the glamour of a princess with a high old-fashioned waist. Its long skirt descended in ample panels, and contrasted nicely with sporty black pumps. Such high waists — and even Empire lines — are becoming ubiquitous on the high fashion runway.

A demure silk floor-length emerald gown was beautifully unstructured, with dropped pockets, and caressed the model’s legs with soft pleats in its skirt.

Rick Owens got philosophical in his spring-summer collection, one inspired by Venice. It was in that region of Italy, according to the American designer, that the word quarantine originated, from its “medieval response to the bubonic plague.”

Defiance was the theme of Owens’ last collection, and on Thursday the vibe of angrily fighting back continued. Stripper boots in bright red and bubblegum pink intimated a sense of danger, and when they merged with leather uber-shorts a note of provocation was struck. The danger theme progressed in stripes on chiffon and crepe.

Knitwear, meanwhile, was malleable up or down — the house said “like a banana” — so that it can cover or expose the wearer, at will.

Like his men’s show, Owens called it “Phlegethon,” which in classical and medieval literature was one of the rivers in the underworld. “Not quite the center of hell but on the way there,” he said. 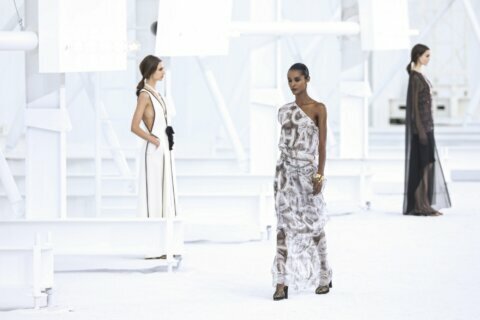 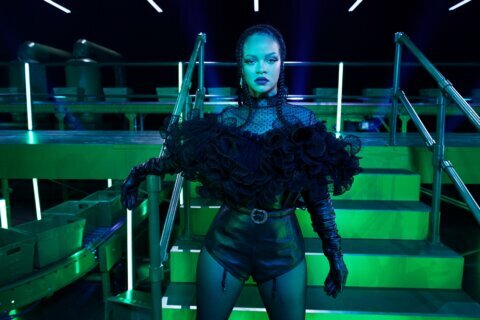