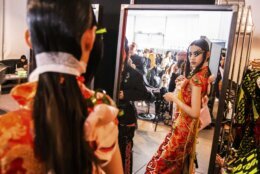 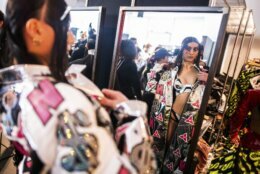 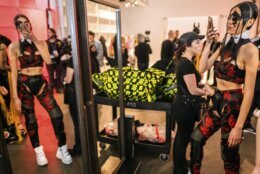 A short, colorful look folded elaborately around the collar into a Chinese takeout box, complete with long, dripping. crystal ramen noodles and pieces of shrimp with words about male genitalia.

She walked the show wearing a sexy, black kimono-style bodysuit. When she unfurled her arms, fabric hung dramatically to the floor with a reference to wrecking male genitalia.

Nothing is off limits for the Berlin-based brand, composed of Pfohl and Nan Li, who met in design school. Their first collection, whose title can’t be repeated, featured vagina-empowering references to pop idols including Nicki Minaj, Rihanna and Miley Cyrus.

Celebrities including Jennifer Lopez, Billie Eilish, Lizzo, Rihanna, Cardi B and Ellie Goulding have all worn the brand.

On Sunday, several looks turned models into Transformers, with oversize, clawlike arms inscribed with sexually empowering words. A sculptural neon-green and black look included a riff on the Louis Vuitton pattern, but with dollar signs and male genitalia and large, insect-style wings coming out the back. The designers said it was their take on the Victoria’s Secret angel wings, in a way that less objectified women.

The schoolgirl uniform was also turned on its head, with a pink and white monogram on a pleated leather skirt.

Their designs are heavily inspired by pop culture, “looking from the outside at American culture” to create “a revolutionary new feminist youth culture,” said Li, who freelanced for Kanye West’s brand Yeezy in the past.