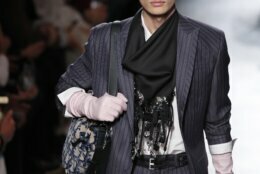 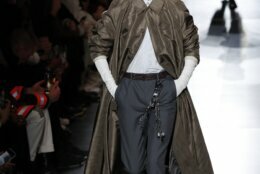 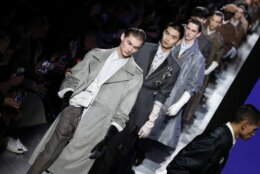 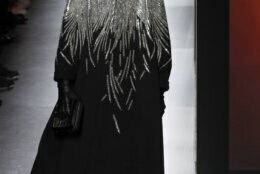 PARIS (AP) — Guests crammed into Dior’s annex in Paris’ Place de la Condorde on Friday amid chaos before the show. Some guests had to jump out of the way to avoid being hit as cars came to unload celebrities, including David Beckham and Robert Pattinson, at an industrious pace. Mayhem such as this is the price tag for Dior Men, now that designer Kim Jones has transformed it one of the calendar’s hottest tickets.

Here are some highlights of Friday’s action at fall-winter 2020-2021 menswear collections and beyond.

Victoria Beckham turned up unexpectedly. Kate Moss rocked up late. And two guests, who sat too near the catwalk, were the targets of taunts and screams by photographers and physically pulled out of the show by security.

Once the chaos died down, three atriums in the center of the dark catwalk filled up with colored smoke, and the show began.

In the androgynous designs, Jones continued to infuse the (women’s) couture house codes into his menswear — to stylish effect.

Each model wore opera gloves and make-up, and many dripped in embellishments such as pendants, pearl clips, beads, fabric flowers and jewels.

Some designs — such as round-shouldered wool coats in taupe and charcoal, with soft geometric paneling — were even borrowed directly from the Dior women’s catwalk.

But for all the gender-bending accouterments, the fall styles were firmly rooted in the masculine.

Chunky leather boots — in black and tan with banding or striped motifs— and long and heavy coats with ruffled sleeves had the dandy swagger popular during the New Romantics era of the 1980s.

And with these, Jones successfully moved the house on from the bread-and-butter suited looks that had made it a little monotonous under former designer Kris Van Assche, who moved to Berluti.

The house of Berluti is a relatively blank canvas: Though it has been a shoemaker since 1895, it’s only produced men’s clothes for less than a decade. And since its launch into ready-to-wear, though the first designers Alessandro Sartori and Haider Ackermann created a sort of brand DNA, comprising saturated color, it was nothing fixed.

In Friday’s show, Belgian fashion designer Van Assche continued to forge his own artistic identity on Berluti — one year after his first collection for the brand debuted.

An archetypal style opened the show: A vivid Persian blue double-breasted suit in loose, ’80s proportions was twinned with a crimson turtle neck.

The Van Assche touch? Multicolor pointed sneakers. It was a feature that intentionally skewed the styles of a house that’s, after all, famed as a classic leather shoes brand.

Elsewhere, the classicism of a pair of pointed black leather boots was broken up with some tailored pants in eye-popping hot raspberry.

It was what we’ve seen before — with a hint of rebellion.

South Korean designer Juun J. was in a kinky mood for fall — one that contrasted nicely with the fancy venue in the Left Bank’s illustrious Ecole de Medecine.

Black leather dominated most of the unisex 38-look show.

Ninja face masks and sexy leather boots provided the dose of attitude and aggression — as did black biker jackets that morphed into jump suits and loose, heavy skirts that rustled with zippers and pockets.

As ever, Juun J.’s fashion design statements were to be found in the unusual proportions of the clothes.

It’s the next logical step for the French designer since his 2014 decision to put an end to his ready-to-wear collections and the related runway shows.

In a tweet, the 67-year-old said the couture show on Jan 22 “celebrating 50 years of my career will also be my last.” He added: “But rest assured Haute Couture will continue with a new concept.”

Next week’s spring-summer 2020 couture show will be held in the Theatre de Chatelet — with a big party feting his career planned.

Gaultier has been an integral part of Paris’ bi-annual couture collection since 1997.

This story has corrected the spelling of actor Robert Pattinson’s last name. 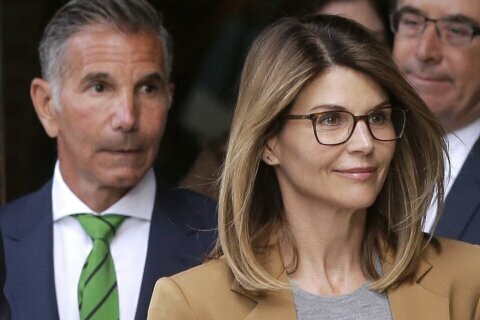