A group of Black soldiers was recently harassed at a northern Virginia restaurant by a woman who used racist language, according to video of the incident that was shared widely on social media.
Listen now to WTOP News WTOP.com | Alexa | Google Home | WTOP App | 103.5 FM

FAIRFAX COUNTY, Va. (AP) — A group of Black soldiers was recently harassed at a northern Virginia restaurant by a woman who used racist language, according to video of the incident that was shared widely on social media.

A Fort Belvoir public affairs spokesperson told Washington TV station WUSA that the woman initially offered to pay for the soldiers’ meal but later returned and claimed they had taken her money before using racist language toward the men.

The video also shows the woman threatening another person who tried to intervene.

The soldiers left the IHOP restaurant, returned to the base and reported the incident to their leadership, the station reported.

“A view of the video will show the Soldiers maintained their composure and military bearing throughout this shocking incident,” the spokesperson said in a statement.

In a statement, IHOP said the incident wasn’t reflective of its commitment to creating “a warm and hospitable dining experience for all guests.”

Elaine Baldwin, the mother of one of the men, told the station the video highlights the ongoing struggle against racism.

“I hope it brings awareness to everyone around the world that this can’t continue to happen,” she said. 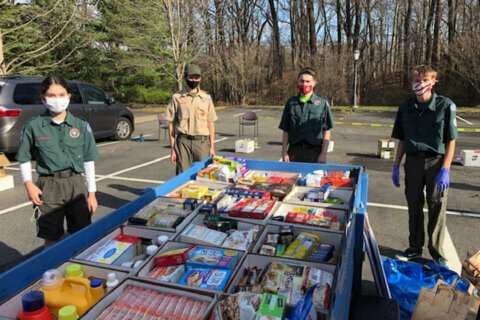