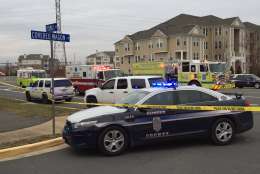 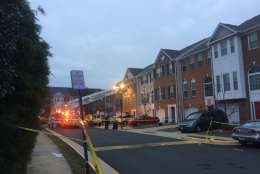 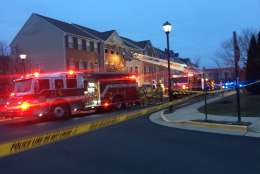 WASHINGTON — A gunman is dead after he shot two people and took a hostage in a Fairfax County town house he later set on fire Monday.

Two brothers called 911 around 2:40 p.m. Monday to report that a suspect shot them with a handgun after they were in a fight in a town house in the 13300 block of Covered Wagon Lane in Herndon, Virginia.

The brothers escaped and drove themselves to the hospital for treatment, and the suspect took a hostage in the house.

Police responded to the scene and while they attempted to negotiate, the suspect set fire to the town house and continued to shoot a handgun, said Fairfax County Police Chief Ed Roessler.

“The fire, meanwhile, is growing more intense, but keep in mind that the fire department cannot make entry when there is someone inside shooting, and now there have been multiple gunshots inside this house,” Parker said.

The suspect, a resident of the house, was transported to a nearby hospital where he died, police said. The hostage was released unharmed. No officers or firefighters were injured in the incident, Roessler said.

“I’m real grateful to the community here that no one else was further harmed,” Roessler said. “The bravery of the men and women of the Fairfax County Police Department truly saved the lives of not only the community members, but also the hostage that was in harm’s way.”

Roessler said the response was a difficult one involving a fire, an active shooter and a hostage situation.

“We train for these types of events, and this is training in action that saved lives.”

Police have not released information about the suspect’s identity, or his relationships to the victims and hostage.

Police are investigating the case and reviewing all available video for more information.

Below is a map with the location of the shooting: