In memoir, Prince Harry says William attacked him during row

LONDON (AP) — Prince Harry says his brother William physically attacked him during a ferocious argument — one of many startling allegations in a new memoir that includes revelations about the estranged royal’s drug-taking, first sexual encounter and role in killing people during his military service in Afghanistan.

In the ghostwritten memoir, titled “Spare,” Harry said that his brother Prince William lashed out during a furious argument over the siblings’ deteriorating relationship. The Associated Press purchased a Spanish-language copy of the book ahead of its publication in 16 languages around the world on Tuesday.

Harry recounts a 2019 argument at his Kensington Palace home, in which he says William called Harry’s wife, the former actor Meghan Markle, “difficult,” “rude” and “abrasive.” Harry said William grabbed his brother by the collar and ripped his necklace before knocking him down.

“I landed on the dog’s bowl, which cracked under my back, the pieces cutting into me,” Harry says in the passage, first reported by The Guardian.

Harry says he had scrapes and bruises as a result of the tussle, for which William later apologized.

The allegation is one of a slew in a book that exposes painful, intimate — and in some cased contested — details about the lives of Harry and other members of the royal family. The memoir is the latest in a string of public revelations and accusations by Harry and Meghan that have shaken Britain’s royal family.

It includes Harry’s assertion that he killed 25 people while serving as an Apache helicopter co-pilot and gunner in 2012 as part of Britain’s military campaign against the Taliban in Afghanistan. He said he felt neither pride nor shame about his actions, and in the heat of battle regarded enemy combatants as pieces being removed from a chessboard.

Harry spent a decade in the British Army — years he has described as his happiest because they allowed him a measure of normality — before taking up full-time royal duties in 2015.

The book recounts Harry’s decades of disenchantment with his privileged, scrutinized and constrained royal life. In it he alludes to the book’s title, recounting the alleged words of his father, then Prince Charles, to his mother, Princess Diana, on the day of his birth: “Wonderful! Now you’ve given me an heir and a spare — my work is done.”

While William was destined from birth to be king, Harry, who is fifth in line to the throne behind his brother and William’s three children, has often appeared to struggle with the more ambiguous role of “spare.”

In the book Harry describes his rebellious teenage years. He recounts how he lost his virginity — to an older woman in a field behind a pub — and describes how he took cocaine when he was 17.

Neither Buckingham Palace, which represents King Charles III, nor William’s Kensington Palace office has commented on the allegations.

Harry, 38, and the American actor married at Windsor Castle in May 2018. Less than two years later, the couple quit royal duties and moved to California, citing what they saw as the media’s racist treatment of Meghan, who is biracial, and a lack of support from the palace.

Since then they have presented their side of the story in an interview with Oprah Winfrey and a six-part Netflix documentary released last month, which recounted the couple’s bruising relationship with the U.K. media and estrangement from the royal family.

In the series, Harry said William screamed at him during a family meeting and accused palace officials of lying to protect his elder brother, who is now heir to the throne. Meghan, 41, talked about wanting to end her life as she struggled to cope with toxic press coverage.

Harry has recorded interviews with several broadcasters in Britain and the United States to promote the book.

In snippets released in advance, Harry told Britain’s ITV that the royal household had cast him and Meghan as “villains” and “shown absolutely no willingness to reconcile.” In an interview with CBS, he said the palace’s refusal to defend him and Meghan from attacks was a “betrayal.”

Palace officials have declined to comment on any of Meghan and Harry’s allegations.

Since Harry and Meghan split from the royal family in 2020, the couple has launched a new life as U.S.-based charity campaigners and media personalities.

Harry has spoken about his desire for a reconciliation with his brother and father, who became King Charles III when Queen Elizabeth II died in September, aged 96. The book’s scorching revelations are likely to make that more difficult.

Asked by ITV’s Tom Bradby whether he will play a part in the British monarchy’s future, Harry said: “I don’t know.”

European Central Bank hikes rates, vows ‘we are not done’ 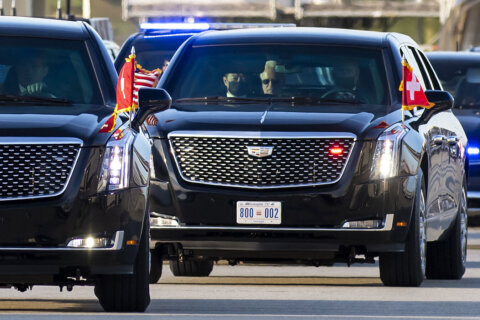