STOCKHOLM (AP) — Four chimpanzees, one of which is wounded, were on the loose inside a building in a Swedish…
Listen now to WTOP News WTOP.com | Alexa | Google Home | WTOP App | 103.5 FM

STOCKHOLM (AP) — Four chimpanzees, one of which is wounded, were on the loose inside a building in a Swedish zoo on Thursday, a day after they escaped from their enclosure. Three others have been shot dead.

Swedish officials and media said the wounded animal has not received veterinary attention because no one can get inside the building at the Furuvik Zoo safely.

The chimps are inside the monkey house, but the staff have not been able to get the three uninjured ones back into their enclosure, the animal park management said in a statement. The wounded animal returned to its enclosure on its own.

“This means that we cannot yet allow people to move freely in the park and we are still on full alert,” the zoo said.

The situation is “extremely serious and tragic, both for our animals and our employees,” the animal park said, adding it did not know how the primates got out.

The animals got out of their enclosure on Wednesday, prompting the zoo to alert the authorities. Three chimps were shot dead by local staff, while the fourth was wounded. The zoo told Swedish media that the animals had to be killed because there was not enough tranquilizer for all of them.

“Our focus right now is to get an overview of where the four are now so that we can start working on getting them back to their enclosures in a safe way,” Annika Troselius, a spokeswoman for the group operating the zoo, told Swedish broadcaster SVT.

“We have to think about people’s lives and safety in the first place. No employees are allowed to work in close contact with animals like this.”

The Furuvik zoo is located near Gavle, 165 kilometers (100 miles) north of Stockholm. It is part of an amusement park. According to the park’s web page, it is also the only primate research station in the Nordic countries.

It is not the first time in recent months that animals have briefly escaped from Swedish zoos. In October, a venomous king cobra escaped from its terrarium at a zoo in Sweden but returned by itself after a week. Daniel Roth of the Swedish Zoo Association told Swedish news wire TT that he sees no connection between the events. 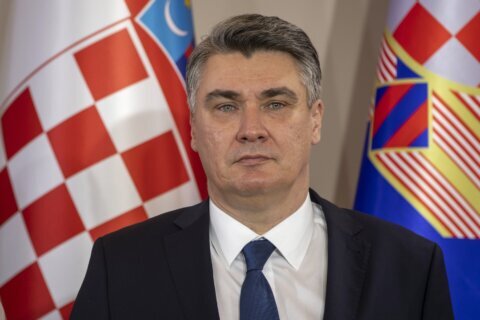