The 19-year-old Aaronson, an American under-20 international, will join Frankfurt in January on a contract through June 2027, the Bundesliga club said.

“In Paxten Aaronson we were able to sign a sought-after and talented player who will give our attack even more flexibility in the future,” Frankfurt sporting director Markus Krösche said. “We have a clear plan for him and want to build him up carefully. Paxten will get the necessary time from us to get used to his new environment and develop in the best possible way.”

Frankfurt did not give details of a transfer free, with the Union saying it was “a multi-million-dollar transfer fee” with bonuses and that it would also retain a percentage of any future fees for the player from Medford, New Jersey.

Aaronson scored four goals in 37 MLS appearances for the Union. After coming through Union Juniors and staying with the Philadelphia Union Academy, Aaronson joined the Union’s first team ahead of the 2021 season.

“Paxten has accomplished so much in a short amount of time,” Union sporting director Ernst Tanner said. “He has worked incredibly hard, and he has taken advantage of every opportunity. There has been interest in him for a long time, and we feel this is the right move for the club and the player, putting him in a good situation to continue developing in one the best leagues in the world.”

Aaronson has eight goals in 14 games for the U.S. under-20 team. He was the Golden Boot winner with seven goals at the CONCACAF Under-20 Championship, where he was also named the tournament’s top player.

Brenden Aaronson joined Red Bull Salzburg from the Union in 2020 and now plays for Leeds in the Premier League.

Frankfurt is fourth in the Bundesliga, which has begun a two-month break to accommodate the World Cup in Qatar. It faces Napoli in the round of 16 of the Champions League in February. 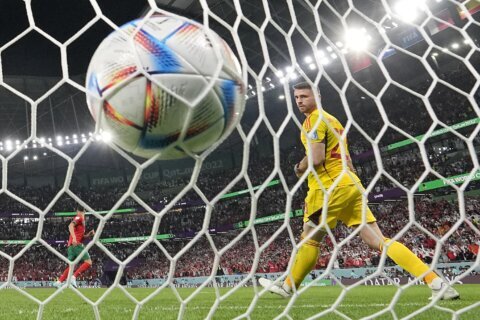