New dad Nadal doesn’t care about playing for the No. 1 rank

PARIS (AP) — Rafael Nadal is a different man. He’s losing sleep over his newborn baby and not so much the No. 1 ranking.

Even with all of his absences, Nadal has a shot at finishing the season as the world No. 1. He has racked up 5,820 points, trailing only the top-ranked Carlos Alcaraz, who has 6,650. But Nadal made clear on Tuesday what his priorities were when he was peppered with questions about fighting for the year-end No. 1 spot.

There will be no fight.

Nadal has achieved the coveted year-end No. 1 ranking five times, tied with Roger Federer, and trailing only Novak Djokovic (7) and Pete Sampras (6).

He’s come to Paris for his first tournament since his wife Maria Francisca Perello gave birth to their first child — a boy — in early October. Nadal admitted he’s approaching things differently now that he’s a father.

“It’s quite interesting how, even after (knowing him only) two or three weeks, leave your son at home and not be able to see him . . . you start missing him,” Nadal said. “We are lucky today that, with the technology, everything, we can do video calls any time that you want.”

Nadal received a first-round bye and will face Tommy Paul or Roberto Bautista Agut in the second round on Wednesday. He hasn’t played competitively since September when he partnered with Federer in doubles at the Laver Cup to celebrate the last match of the retiring Swiss great.

Nadal won the Australian Open and French Open this year to achieve a record 22 Grand Slam singles titles, one more than Djokovic and two more than Federer. But the vibe on tour is a changing of the guard, with 36-year-old Nadal passing the baton to 19-year-old Alcaraz, at least in their Spain homeland.

Nadal has struggled with injuries and played only 10 tournaments. He suffered a stress fracture in his ribs at Indian Wells in March. Then an abdominal injury forced him to pull out of the Wimbledon semifinals and affected him the whole summer.

“Today is a different story for me. I don’t know how many events I played, like 10, and I finished eight. Difficult to be No. 1 like this. But happy to be in that position that says when I was playing, I was playing well.”

Alcaraz became the youngest men’s No. 1 in the 50-year history of the ATP rankings in September when he won his first major crown at the U.S. Open.

“It was my dream to win a Grand Slam, to become No. 1 of the world, but I didn’t expect to do that at 19 years old,” Alcaraz said. “Everything came so fast, faster than I could imagine.”

Alcaraz is set to clinch the year-end No. 1 for the first time. He could be the first player to achieve that outside the Big Four of Nadal, Djokovic, Federer and Andy Murray since Andy Roddick in 2003.

No. 3 Stefanos Tsitsipas and No. 4 Casper Ruud have an outside chance at No. 1 as 1,000 points go to the Paris Masters winner and 1,500 points for a perfect run at the ATP Finals in Turin this month. 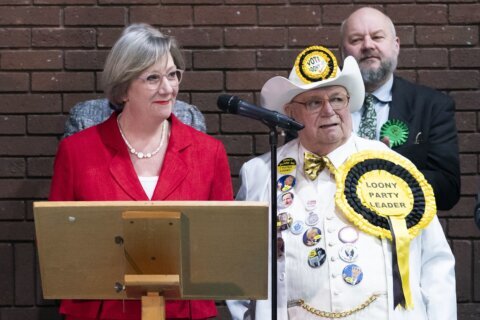