England closes in on finally winning another World Cup

While that aim may not feel as fanciful as it once did, the issues Dyke said had held England back for nearly 50 years, since its only triumph in 1966, remain just as pertinent ahead of Monday’s opening Group B game against Iran.

A Premier League awash with global talent means fewer home-grown players in the top flight for England coach Gareth Southgate to pick from.

In 2013, Dyke described it as a “frightening trend” and said “English football is a tanker that needs turning.”

“The problem is serious, very serious,” he said in a speech that has been proven correct, not least because England has so far met or surpassed his targets in spite of ongoing concerns still not being fully addressed.

Those headline goals included to “at least” reach the semifinals of the 2020 European Championship. England lost to Italy on penalties in the final of last year’s tournament, which was delayed by 12 months because of the coronavirus pandemic.

At the last World Cup in Russia, Southgate led his team to the semifinals, which was ahead of Dyke’s schedule.

As part of his nine-year plan, Dyke also wanted the progress to be reflected at youth level.

England won that tournament, as well as the U17s in the same year.

Dyke’s targets have been eerily accurate — and England’s trajectory over the past four years points toward a serious challenge in Qatar. But Southgate still considers himself hindered by the same problems his predecessors faced.

Nine years ago, Dyke spoke of only 32% of English players in the starting lineups of Premier League clubs. The picture painted by Southgate when announcing his 26-man squad last week was no more encouraging.

“Everybody says we’ve got enormous depth, but we were 31% of the league last year,” Southgate said. “Because the team has done well it has masked that we’ve only got four English goalkeepers playing in the Premier League currently. Left backs, there aren’t many playing.”

Southgate highlighted defensive midfield as an area English academies need to focus on at a time when he has had to select Kalvin Phillips, despite the Manchester City player managing only 40 minutes of action since a shoulder operation in September.

Not a single player that featured in the final of the under-20 World Cup-winning team is part of Southgate’s squad in Qatar. Only Phil Foden and Conor Gallagher have made it from the U17-winning team.

Still, this year’s squad is considered to have generational talents in the form of Foden, Jude Bellingham and Jack Grealish in particular. But England enters this World Cup with a sense of what might have been.

The successes of 2018 and Euro 2020 have felt ahead of the curve with the promise that a raft of players would ripen in time for this year’s competition. Last year, Southgate might have expected Mason Greenwood to have established himself at the front of Manchester United’s attack and as a genuine rival to Harry Kane at center forward for England.

A prodigious talent, who is equally as clinical with either foot, he looked as exciting as any English prospect since Wayne Rooney. But the forward, who has been charged with attempted rape, engaging in controlling and coercive behaviour, and assault, has not played since January after being suspended by United.

Jadon Sancho’s form has dipped alarmingly since joining United from Borussia Dortmund in 2021 for $100 million and is no longer in the picture for England. To a lesser extent, club teammate Marcus Rashford has failed to develop as anticipated, but is still part of Southgate’s squad after a promising start to the season.

Injuries to Chelsea fullbacks Reece James and Ben Chilwell have also been a significant blow to England’s preparations. But if Southgate was powerless to control any of those situations, an apparent reluctance to make Foden a focal-point of his team is on him.

Likened to City great David Silva as he progressed at club level, for the national team he is widely regarded as the player England has missed since Paul Gascoigne in the 1990s. Yet Southgate has failed to find a settled position for the 22-year-old forward in either midfield or attack.

For a nation that has long-struggled to maintain possession against the best teams, a player who can manipulate the ball as well as Foden should be a fixture. Instead, there is no guarantee he will start against Iran, nor what position he would play.

Southgate’s handling of Foden — and Grealish — feeds into the belief among some that the coach is too conservative and overly-reliant on a trusted few. Harry Maguire is expected to be at the heart of the defense despite being dropped by United this season. Raheem Sterling is likely to be prominent even though he has endured a difficult start to life at Chelsea. Phillips and Kyle Walker are both in the squad despite carrying injuries.

But all have consistently produced for England — particularly in major tournaments.

While critics might accuse Southgate of blind faith, he could point to the very lack of options Dyke cited nine years ago. 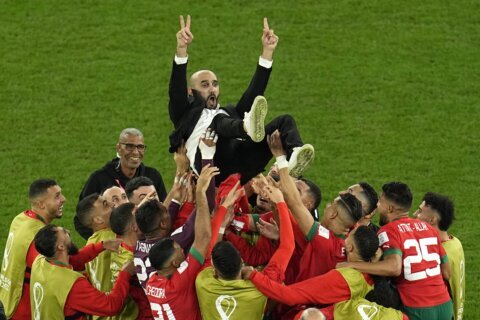