Holidays: Where to see holiday lights | Santa's back with inflation, inclusion on his mind | 4 ways to limit your holiday debt | Inflation 'definitely a guest' at holiday celebrations this year
Home » Europe News » Britain, Australia into Billie…

GLASGOW, Scotland (AP) — Britain pulled off an unlikely 3-0 victory over Spain in the Billie Jean King Cup on Thursday to reach the semifinals of the top team event in women’s tennis for the first time in 41 years.

Australia also reached the last four in Glasgow, but the story of the day was Britain’s remarkable comeback to win Group C — sealed by a victory by a rookie doubles pairing.

Alicia Barnett and Olivia Nicholls were late call-ups following Emma Raducanu’s withdrawal and had not been in anything remotely like this situation before. Still, they shrugged off the pressure of a winner-takes-all doubles match against Aliona Bolsova and Rebeka Masarova to win 7-6 (5), 6-2.

That backed up earlier wins in the singles by Heather Watson and Harriet Dart over much higher-ranked opponents. Hart was in tears after stunning 13th-ranked Paula Badosa in a 6-3, 6-4 victory, despite a ranking gap of 85 places.

“It’s so awesome being here in Britain and being able to host this event,” Dart said. “I’m just so happy to keep this one alive.”

In the first match, Watson was excellent in a 6-0, 6-2 win against Nuria Parrizas Diaz.

Britain arguably should not even be in the 12-team tournament, having lost a qualifier to the Czech Republic in April. The team was given a wild-card entry when Britain stepped in to host the event at the Emirates Arena and made the most of it by sweeping the five-time champions two days after a loss to Kazakhstan.

Earlier, Australia became the first nation to reach the semifinals by beating Belgium 3-0 for a second group win.

Storm Sanders beat Alison van Uytvanck 6-2, 6-2 while Ajla Tomljanovic’s victory was sealed when her opponent, Elise Mertens, had to retire because of a shoulder injury when trailing 4-6, 6-4, 3-0.

Australia, which also triumphed in the doubles, had already beaten Slovakia on Tuesday in Group B.

Belgium played its two matches before the Czech Republic, who had two players at the WTA Finals last week, contested its first in Group D. That drew criticism from Belgium captain Johan Van Herck.

“We were not helped by the situation,” he said. “What happened with Elise, I don’t think it’s very correct. It had a huge impact on what we had to go through here, especially Elise now with an injury.

“So it’s something where I think we, as a small country, have to pay a price for not being the Czech Republic that starts today or the United States that can play in the evening.”

The Czechs defeated Poland 2-1 and will play the U.S. for a place in the semifinals. It’s the same scenario for Canada after beating Italy 3-0 in Group A to set up a winner-takes-all match against Switzerland on Friday.

Gabriela Dabrowski joined Fernandez to win the doubles for Canada 6-1, 6-1 against Jasmine Paolini and Lucia Bronzetti.

Switzerland beat Italy 3-0 in the group opener on Wednesday. 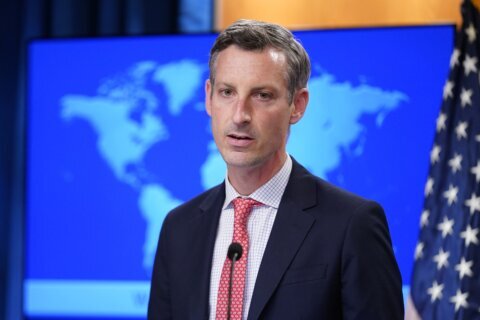