HELSINKI (AP) — Latvia on Thursday rejected as “absurd” claims by Amnesty International that it is violently mistreating migrants attempting to enter the European Union member country through Belarus.

The human rights watchdog said in a report released Thursday that Latvian authorities have violently pushed back refugees and migrants – mostly from Iraq and elsewhere in the Middle East – from the country’s borders with Belarus and of “subjecting many to grave human rights violations, including secret detention and even torture.”

In emailed comments to the Associated Press, Latvia’s Ministry of Interior said that “not a single case has been identified” of Latvian authorities “having used physical force or applied special means” and that no complaints of such behavior have been recorded.

“We do not support the efforts of Amnesty International to equate the malicious instrumentalization of migration and intentional threat to the EU’s external border by Belarus, on the one hand, with genuine asylum seekers and persons in a vulnerable situation, on the other hand,” the ministry said.

Latvian Foreign Minister Edgars Rinkevics tweeted that Amnesty International “has lost any credibility and this report further proves complete degradation of once respected human rights organization” while his country “rejects these bogus accusations.”

A key allegation in the report is that Latvia, a Baltic nation of 1.9 million, uses rules stipulated under a declared state of emergency to suspend migrants’ rights to seek asylum in border areas, allowing “Latvian authorities to forcibly and summarily return people to Belarus.”

The report said “dozens of refugees and migrants have been arbitrarily held in tents at the border in unsanitary conditions” and that only a small percentage of people were allowed into Latvia. The “vast majority” of migrants have been placed in detention centers and offered “limited or no access to asylum processes, legal assistance or independent oversight.”

Elisabeth Arnsdorf Haslund, spokeswoman for the United Nations agency UNHCR for refugees in the Nordic and Baltic countries said the agency has and continues to receive information and reports of people being denied entry into Latvia from Belarus as well as “reports on violence and abuse.”

Arnsdorf Haslund said the UNHCR acknowledges Latvia’s security concerns “and shares concerns about instrumentalization of asylum seekers, refugees and migrants,” but urged the country’s authorities “to live up to their international obligations” and ensure access to territory and asylum procedures.

“We understand that Latvia has faced an extraordinary and challenging situation; however legitimate security concerns should be addressed without undermining refugee protection and the human right to seek asylum,” Arnsdorf Haslund told the AP.

Latvia shares a 173-kilometer (107-mile) border with Belarus. It is currently building a barbed-wired fence to cover large parts of the border in a project scheduled for completion by 2024.

The Latvian Interior Ministry said once the state of emergency was declared in August, authorities had announced that migrants’ asylum applications would be assessed individually and entry would be permitted once “humanitarian grounds is established.”

“No country is under an obligation to allow every foreign national who desires to do so, to enter its territory, and all the more, those who are making deliberate attempts to cross the national border illegally,” the Latvian interior ministry said.

Latvia’s Ombudsman Juris Jansons said officials from his office have visited areas along the Latvian-Belarusian border on several occasions and “no infringements of rights were found during these visits.” He added that although the state is duty-bound to guard it territorial security, it must also ensure “that the restrictions imposed are really necessary, do not disproportionately restrict the human rights of individuals.”

In the past few years, Latvia and neighboring Lithuania and Poland have seen a surge in the number of migrants trying to enter their countries from Belarus.

Lithuania last year accused Belarusian police officers of illegally entering its territory to push a group of migrants over the border. The EU has earlier condemned Belarus for what it said was an attempt by the country to “instrumentalise human beings for political purposes”.

Follow all AP stories about global migration at https://apnews.com/hub/migration 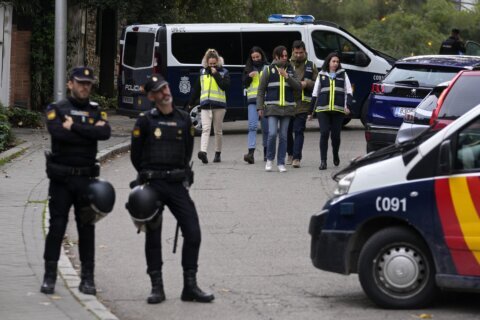